Aromatics enhance creamy black beans in this easy and healthy side dish.

The recipe authorities of this fair site have said some mighty smart things about the humble bean.

For instance, if there's one standout nugget of know-how in Kenji's treatise on chili, it's how salting beans before you cook them makes them especially plump and flavorful, and that they won't, contrary to popular belief, turn into little rocks. (He's also roasted them for super-meaty black bean burgers.)

Then, Daniel did the deepest of dives into the difference between dried and canned beans, and he made some killer refried beans along the way—refritos any Tex-Mex joint would be thrilled to serve.

These gents are smarter than I am, and better cooks too, so if you want to maximize every gram of flavor in your beans, listen to them.

But today I'm taking a simpler approach. Because sometimes the happiest cooking is also the easiest, and in the case of beans, taking the easy route can produce something damn delicious. There are days when I want to take every step to coax incredible flavor out of my ingredients. But sometimes I just want a pot of beans.

Everyone should have a good pot of beans in their repertoire. Beans can stretch a small portion of meat into a well-rounded meal. Hell, they can be a meal all on their own. And when a pound of dried beans costs all of a dollar or two, a pot of beans is about the cheapest way you can feed any crowd. When I've run out of inspiration and have no clue what to cook, I can always count on beans to improve everything else.

These black beans, soft and creamy, fragrant with garlic and onion and cloaked in a starchy sauce perfect for soaking into rice, are my go-to recipe. They are vaguely Latin American but by no means limited to those cuisines. I serve them alongside braised pork, or stuff them in enchiladas, or pile them on some stewed greens. They become quick fodder for quesadillas and, with a little effort, can be transformed into a serious soup. Oh, and did I mention they freeze beautifully?

They also take about no work at all. And yes, they do indeed taste awesome.

That said, even lazy bean-cooks need some rules. I have two.

There's a time and a place for canned beans, such as this amazing black bean soup that's thinned out with chicken broth and enriched by partially puréeing the beans. But if you want a simple pot of whole beans in a rich, starchy gravy, the slow release of starch from dried beans is the best way to get there. Don't worry—as long as you soak your beans ahead of time and cook them thoroughly, they won't turn out tough.

Beans need a balance of aromatics to enhance and contrast their earthy flavor. For most cooks, that means starting with a simple mix of garlic and onion. I use these in abundance but also take a page from Cuban cuisine with the addition of an orange. Yes, a whole one: sliced in half, juice squeezed into the pot, and then I throw in the hulls, too. The orange simmers along with the beans, garlic, and onion, bringing a slightly floral, slightly citrusy sweetness to the broth. That peel adds a subtle bitterness that emphasizes the beans' earthy flavor.

One note: Make sure to use a sweet juicing orange instead of a sour or bitter variety. Too much acidity can keep your beans from softening properly.

How to Cook Dried Black Beans

In an earlier version of this post I mentioned soaking black beans to speed up their cooking time. But Kenji's since shown that not soaking your beans beforehand actually improves their color, texture, and flavor, while only modestly increasing the cooking time (while saving you eight to 12 hours of soaking). So in true lazy cook fashion, rinse your beans, put them in a large pot with your garlic, onion, and orange, and cover them with several inches of water.

But wait? Shouldn't you sauté your garlic and onion first for better flavor distribution first? Nope! I tested both options: sautéing garlic and onion in a little olive oil before adding beans and cooking, and cooking the beans with raw whole onion, garlic, and orange all at once. Tasters were evenly split on the two pots, with a slight preference for the beans that didn't use pre-cooked aromatics.

The way I see it, when you're making pot beans, you're making beans. The beans should be front and center. Sautéing the garlic and onion sweetened their flavors to the point where they walked all over the beans, and the oil in the pot brought the orange's citrus sweetness to the fore when it should be a background player. At the end of the day, it's a slight difference, but leaving your aromatics whole and raw means less prep time and marginally beanier beans.

"Resist the urge to stop cooking them and let them simmer until they turn completely creamy. You want proper pot beans? Give them time."

Once your beans are simmering, they don't need much attention at all. Keep the heat low and the water level above their heads so they cook evenly. Stir them every now and then. But for the most part, dried beans cook themselves. At some point, the beans will seem "done," but still somewhat al dente. Resist the urge to stop cooking them and let them simmer until they turn completely creamy. You want proper pot beans? Give them time. Just how long is hard to say, and depends on the age of your beans and some other factors. But I don't start cooking dried beans without at least an hour to kill, and usually more like two or three.

(Hey, I said this would be the laziest way. Not the fastest.)

Once the beans are completely creamy, increase the heat a little to reduce the cooking liquid into a thick gravy, keeping in mind it'll thicken more as the beans cool. Remove your onion and orange and add salt to taste now that the gravy is properly reduced. You'll notice in these photos that some of the beans have blown out, a common sign of beans that haven't been salted in a pre-cook soak. And you know what? That's fine by me—they still taste great, and that extra starch thickens the sauce nicely.

Now that you have your beans, it's time to ask yourself the only hard question of the day: what do I serve them with? 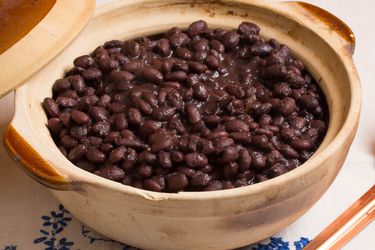