How often do you get roasted potatoes that look like they're going to be awesomely crisp, only to find that rather than crispness, all you've got is a papery (or, worse, leathery) skin on the exterior? Getting truly crisp potatoes is harder than it seems. Simply tossing them in a bit of oil and roasting them just doesn't work.

The problem is that with simple roasting, they'll crisp up, all right, but the layer of crispness will be very, very thin. Within moments, steam from the interior of the spud will cause the crisp bits to soften.

So what is it that makes a potato crisp?

Well, as I found out when exploring French fries last year, it's a dehydrated layer of gelatinized starch that does it. The thicker the layer of gelatinized starch you can build up, the crisper the potato. You accomplish this by parboiling the cubed potatoes, and, just as with making French fries, adding a touch of acid to the boiling water acts as insurance against accidentally over-boiling them—the pectin that holds potato cells together is strong in slightly acidic environments.

Want to know the secret to even crisper roast potatoes? Increase surface area. The more surface area a potato has for a given volume, the more bits there are to crisp up, and the crunchier it'll become. The potatoes above have been parboiled, then tossed roughly in a bowl with a metal spoon until their surfaces were roughed and scratched up. All those microscopic nooks and crannies will make for an extra-crunchy surface.

You can use any type of potatoes you like for this, but there's a tradeoff:

Next question: What's the best fat to use?

Well, if you can get your hands on it, this:

People often tout the awesomeness of duck fat with potatoes, and for good reason: It tastes awesome. Duck fat has a distinct richness and aroma that get absorbed very easily into the surface of a spud. On top of that, it's got plenty of saturated fat and a high smoke point, which makes it an ideal medium for crisping up fried or roasted foods. (In general, the higher the saturated fat content of an oil, the more efficiently it'll crisp foods.) Can't get duck fat? Well, turkey fat or chicken fat collected from roasted birds will do just fine.

Bacon fat and rendered lard are also fine choices, as is just about any sort of animal-derived fat.

If you must use it, extra-virgin olive oil will certainly do admirably well, though you won't get quite the same level of crispness you'd get out of an animal fat.

Once your potatoes are tossed in fat and seasoned well, all you've got to do is roast them in an extremely hot oven until they crisp up. (I do this while my turkey is resting.)

I roast mine directly on a heavy rimmed baking sheet—they have a tendency to stick to foil. The key is to make sure you let the underside crisp up completely before you even attempt to lift or flip them. If the potatoes don't come off relatively easily, you run the risk of breaking off the tops, leaving the crisp bottom cemented to the bottom of the pan. This is not an ideal situation.

Moral: Your potatoes will release themselves from the pan when they're good and ready. Don't force them. 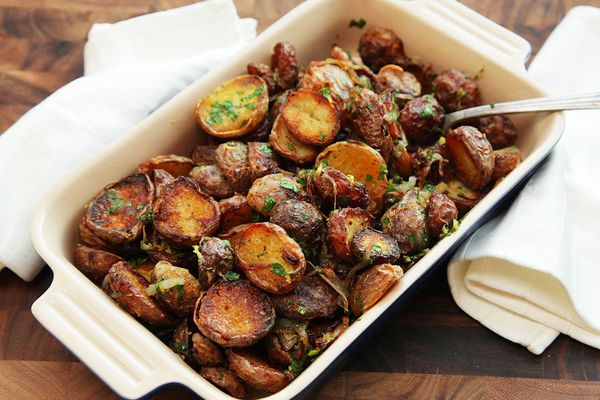 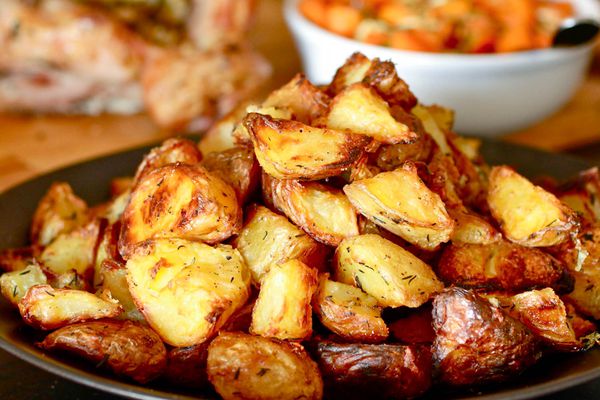 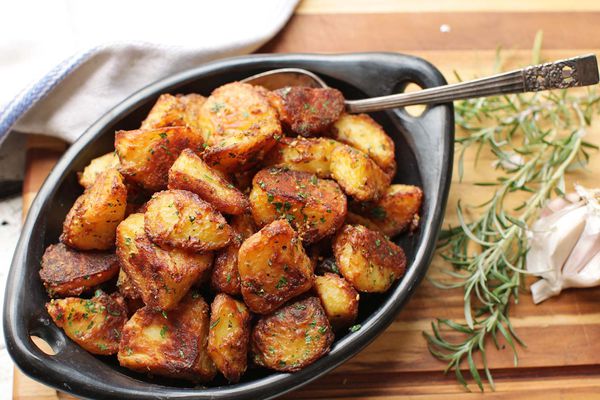 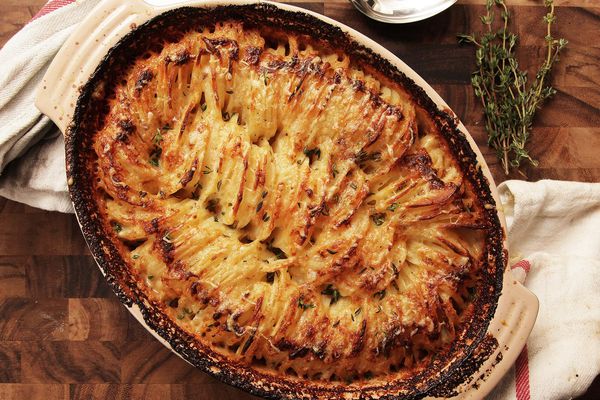