Here's another recipe excerpted from my book, The Food Lab: Better Home Cooking Through Science! I've been getting requests for my take on buttermilk biscuits for years, so I decided to spend a few weeks perfecting my recipe for the book. My version comes out tender and crisp, with tons of extra-flaky layers. The recipe is also designed so you can add whatever flavoring you like directly into the biscuits, whether it's cheese, scallions, bacon, black pepper, or honey.

Below you'll find the section and recipe from the book, in near-complete form. In the book, you'll also find a few extras, like recipes for variations (Cheddar Cheese and Scallion or Bacon-Parmesan, anyone?), a recipe for flaky scones based on my biscuit technique, an easy cream biscuit recipe that requires absolutely zero difficult folding or shaping, and, of course, a recipe for sausage gravy to douse them all in.

I hope you enjoy it.

If my wife and I ever have identical twins, I'd like to name one Stanley and the other Evil Stanley, for the purposes of scientific inquiry. We'll raise them exactly the same, but over time, Evil Stanley will undoubtedly begin to live up to his name because of a subtle difference in the way the world treats him. There is sure to be a tragic ending or two somewhere in the story. In the never-ending debate between nature versus nurture and their effect on the human mind, it's always fascinating to me to see how radically different the end results of seemingly similar starting cases can be.

So it is with pancakes and biscuits. Take a look at the ingredients lists, and they're nearly identical: flour, butter, baking powder, baking soda, and liquid dairy. But one ends up fluffy, tender, and relatively flat, and the other ends up tall, flaky, and crisp. The difference is all in the details.

First off, biscuits are a dough, not a batter, which means that the ratio of flour to liquid is high enough that it can pull everything together into a cohesive ball that's soft but doesn't flow. Even more important is the way in which the butter is incorporated. With pancakes, the butter is melted and whisked into the batter, resulting in a sort of uniform tenderness. For great flaky biscuits, on the other hand, the butter is added cold and hard, and it's added before the liquid is. As you work the hard butter into the flour, you end up with a mealy mix comprised of small bits of butter coated in flour, some amount of a flour-and-butter paste, and some completely dry flour. Now add your liquid to this mix, and what happens? Well, the dry flour immediately begins to absorb water, forming gluten. Meanwhile, the flour suspended in the flour-butter paste doesn't absorb any water at all, and, of course, you've still got your clumps of 100 percent pure butter.

Kneading the dough will cause the small pockets of gluten to gradually link together into larger and larger networks. All the while, butter-coated flour and pure butter are suspended within these networks. As you roll the dough out, everything gets flattened and elongated. The gluten networks end up stretched into thin layers separated by butter and butter-coated flour.

Finally, as the biscuits bake, a couple things occur. First, the butter melts, lubricating the spaces between the thin gluten sheets. Next, moisture—from both the butter and the liquid added to the dough—begins to vaporize, forming bubbles that rapidly increase in volume and inflate the interstitial spaces between the gluten layers, causing them to separate. Meanwhile, remember there's also baking powder and baking soda involved. This causes the parts of the dough that are made up of flour and liquid to leaven and inflate, adding tenderness and making the texture of the biscuits lighter.

One of the keys to ultratender biscuits is not all that different from making light pancakes: don't overmix. You want to knead the ingredients just until they come together. Overmixing can lead to excess gluten formation, which would make the biscuits tough. The other secret is to keep everything cold. If your dough warms up too much, the butter will begin to soften and become more evenly distributed in the dough. You want the butter in distinct pockets to help give the biscuits a varied, fluffy texture.

There are a couple ways to help achieve these goals. First is to incorporate the butter using a food processor. A food processor's rapidly spinning blade will make short work of the butter, with little time for it to heat up and begin to melt. The method by which you incorporate the buttermilk is also important. Some folks like to do it by hand, others in the food processor. I find that the absolute best way is with a flexible rubber spatula, gently folding the dough and pressing it onto itself in a large bowl. Not only does the folding motion minimize kneading (and thus gluten), it also causes the dough to form many layers that will separate as they bake, giving you the flakiness you're after.

For an extra boost of flakiness, I like to go one step further and make what's called a laminated pastry: pastry that has been folded over and over itself to form many layers. The doughs for classic French laminated pastries, like puff pastry and croissants, are folded until they form hundreds of layers. With my biscuit dough, I'm not quite so ambitious, but I've found that by rolling it out into a square and folding it into thirds in both directions, you create nine distinct layers (3 × 3). Roll the resultant package out into a square again and repeat the process, and you've got yourself a whopping 81 layers (9 × 3 × 3)! How's that for flaky?

And guess what: a modern flaky American scone is really nothing more than a sweetened biscuit cut into a different shape. Master one, and you've mastered the other.

Here's how to make buttermilk biscuits, step-by-step. Jump ahead for full recipe with measurements.

Combine flour, baking powder, baking soda, and salt in a food processor (1), then scatter with butter cubes (2). Pulse until butter is broken into quarter-inch pieces (3). Then transfer to a large bowl (4).

Add buttermilk (5) and fold with a spatula until it forms a coherent mass (6). Transfer to a floured cutting board or work surface (7) and knead briefly and form into a rectangle (8).

Fold the bottom third up over the top. You now have a package with nine layers in it (13). Roll the smaller square out into a rectangle again, and if you want to add fillings, like grated cheese and scallions or bacon and Parmesan, do so now (14). Repeat the folding process by folding the right third over the center (15) and the left third over to the right (16).

Fold the top third down over the center (17) and fold the bottom third up over the center (18). You now have a full 81 layers (9 x 3 x 3) in your dough. Re-roll the dough into a rectangle (19). Cut six rounds out of the dough with a four-inch biscuit cutter, gather the scraps, knead gently, re-roll, and cut out two more rounds. Place them on a parchment-lined baking sheet (20).

Brush the tops and sides of the biscuits with melted butter (21). Transfer to a preheated oven to bake (22). Rotate the biscuits halfway through baking (23). Let the biscuits cool for five minutes before serving (try your best to resist!) (24). 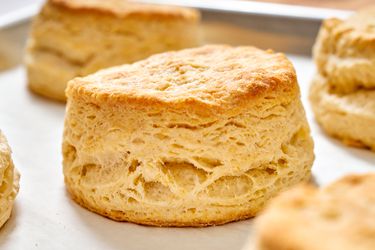 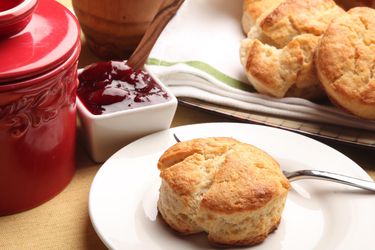 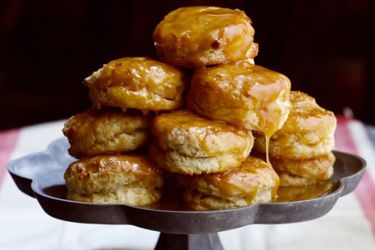 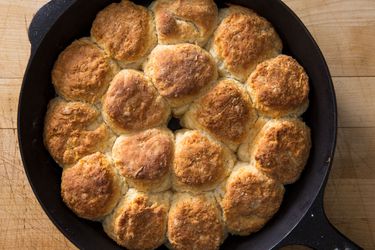 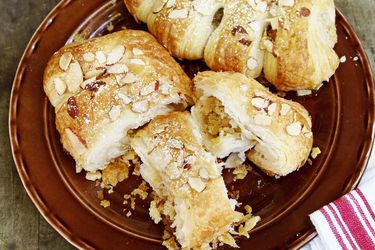 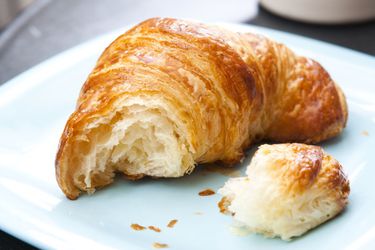 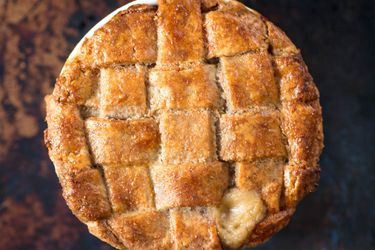 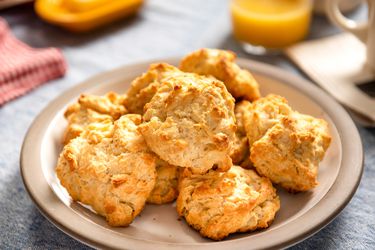 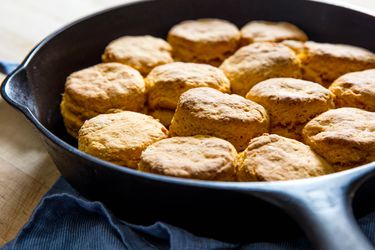 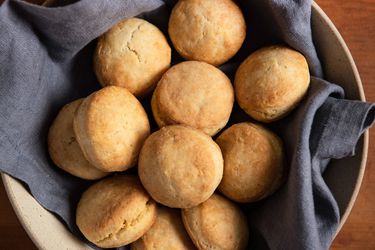 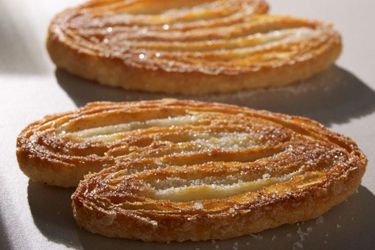