Picture this scenario: for some strange reason, you believed me when I said that you want to make a turkey porchetta for Thanksgiving this year. You trusted me when I said it would be the juiciest, tastiest, bestest Thanksgiving roast you've ever had, and why not? You've never lied to me, I have no reason to lie to you.

So now that you've got a date with your turkey breasts, that leaves your turkey legs heading to Thanksgiving stag. How are you going to dress 'em up?

Well, you could simply roast them in the traditional manner, and provided you cook them long enough to get 'em tender and crisp their skin, they'll definitely turn some heads when they walk into the room. But if you want turkey legs that are pretty enough and tasty enough to be crowned queen of the ball, then might I suggest another option?

There are a number of advantages you get from braising turkey legs over roasting them.

Convinced? Good. Here's how we do it, step by step.

Start by searing the legs over high heat in a neutral oil (I use canola). The key here is to get them nice and brown so that we can build up a decent fond in the pan (the browned proteins that builds up on the pan as you sear), and begin the process of flavoring the turkey. Don't worry about overcooking at this stage—even with searing high heat, the thick turkey skin will insulate the meat below it.

After the first side is seared (about 8 minutes), flip the legs over and sear the second side. It's not as important to get this second skin-free side seared, so it will take a shorter amount of time.

Transfer the turkey legs to a large plate or tray, then add vegetables to begin building the flavor base for the sauce. I use roughly chopped onions, celery, and carrots, along with a couple of smashed garlic cloves, some whole rosemary sprigs, and some thyme sprigs.

Sauté the vegetables until well browned, stirring and scraping at the darkened bits deposited by the turkey below.

Now pour in a couple cups of dry red wine. You don't have to want to drink the wine you're using, but make sure that it's a wine that has no residual sugar, and isn't overly jammy tasting. Remember, flavors will intensify as they reduce, so strong flavors will now become stronger later.

Once your wine is reduced, add some chicken or turkey stock and nestle your turkey legs into it, using the vegetables to keep the legs' upper surfaces protruding above the liquid. The goal here is to expose that skin to the heat of the oven so that it can crisp as the rest of the turkey slowly braises. It's a technique I used in this braised chicken with green chiles and white beans dish, but it works equally well with turkey.

Bring the whole thing to a simmer on the stovetop, then transfer it to a 275°F oven.

Serendipitously, at a low and slow 275°F, it turns out that turkey legs will crisp and braise in just about the same amount of time as it takes to roast a turchetta (about 2 hours), which means that you can cook and serve them both at basically the same time. Lucky you! Or rather, lucky your guests!

Ain't that a purdy (half) birdie?

Next step: let's turn that braising liquid into a sauce. Start by taking the legs out of the liquid using a slotted spatula and setting them aside to rest.

If I were going the typical braise route, I'd strain the sauce and then reduce it slowly, letting the natural gelatin from the turkey legs thicken it up into a glossy glaze. But this is Thanksgiving, so a roux-thickened gravy is in order (what else are we going to smother our potatoes in?)

We still start by straining and skimming off any excess fat.

Still, I like to keep it relatively thin. Nobody (except my mom) likes a gloppy gravy. I use 2 tablespoons of butter and 2 tablespoons of flour for the 3 1/2 cups or so of liquid that the braising process leaves behind.

The key to getting a really smooth gravy is to add the liquid slowly and to whisk quickly, making sure to incorporate every bit of liquid as you trickle it in.

Once all the liquid is added, bring it up to a boil and let it simmer for a minute or two to ensure that the flour has absorbed all the liquid it can and the starch has hydrated sufficiently to thicken the gravy up nicely.

The only step left now is to carve. I like to make serving at the table as easy as possible, so that means removing the drumsticks from the thighs.

The meat inside should be extremely tender

Removing the bone from the turkey thigh isn't completely necessary, but it's a nice thing to do if you want to give your guests that extra little gift (that will undoubtedly go unnoticed, but hey, it's Thanksgiving, right? What else is the holiday for if not to not-notice things you should be thankful for?).

Serve this puppy up alongside your turchetta and you'll secure yourself as Thanksgiving host for life. Whether or not this is a good or a bad thing is up to you.

What's that? What should you do with those turkey tenderloins you still have leftover from the turchetta, you ask? Don't worry, we've got a use for them too. Stay tuned! 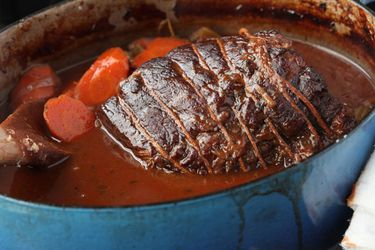 How Much Liquid Should I Use When Braising? | Ask The Food Lab