Every since my wife, Adri, got pregnant with our now-eight-month-old daughter, Alicia, I regularly get asked what my plans are for feeding her. How can someone who writes about food and tests recipes for a living meet the picky and precise needs of an infant without losing his mind? They ask me if my cooking has changed, or if my food processor is getting a workout, or whether I've finally gotten over my revulsion at bananas for the good of the baby (the answers to those questions are two "no's" and an "I'm working on it"). Many folks seem to think life as a baby-saddled food writer is akin to that of a serious film critic who's suddenly forced to watch a Teletubbies marathon.

But I came into this armed with a secret weapon. You see, long before Alicia was born, I was planning her meals. I mean, years before. A good friend of mine who happened to be a child life specialist lent me her copy of Matthew Amster-Burton's Hungry Monkey: A Food-Loving Father's Quest to Raise an Adventurous Eater.

In it, the writer, a food critic turned stay-at-home dad and a serious lover of dad jokes and dry humor (could a book possibly resonate more with me?), talks about his experiences raising his young daughter Iris, and how he dealt with her ever-changing tastes in food. The book is an easy, fun, and hilarious read, even for folks who don't have children. I imagine growing up in the Amster-Burton household to be like living in a Douglas Adams novel—a new lighthearted, hilarious adventure every day. But the lessons Amster-Burton hides behind his substantial wit have been profoundly useful for me as a new parent trying to raise a kid with healthy eating habits (and I mean healthy in all senses of the word).

His strategy is a sort of loose variant of baby-led weaning. Its core tenets include feeding babies and toddlers the same food that you're making for yourself; being adventurous and experimental with different cuisines, techniques, and flavors; and ensuring that mealtimes are fun by getting the kids actively involved with eating (and preparing, when they're old enough). "Food is fun, and you get to enjoy it three times a day, plus snacks," he writes.

At the youngest stage, when your kids are first old enough to start tasting solid food (a doughnut crumb that accidentally fell on his daughter's head at three months, in Matthew's case), things are pretty easy. Alicia sits down at the table for three meals a day with me, and they're easily the best part of her (and my) day.

Yesterday, Alicia stole a sweet potato quesadilla from Adri's plate and got it into her mouth before Adri even had time to react or explain to her that she could have her own quesadilla (there's no reasoning with eight-month-olds). Thus far, Alicia is not a picky eater. Far from it. She'll eat anything and everything she can get her hands on. Sure, she likes the obvious things—toast and runny eggs (quail eggs, to be precise) or the occasional chocolate chip cookie (she's still not coordinated enough to do a good milk dunk)—but she also jumps into whole pan-seared fish with olives and tomatoes and pappardelle with duck ragù with equal gusto. She eats blackberries and raspberries by the tiny fistful (full disclosure: she can fit only a single berry in her fist), is in love with avocado, and has yet to meet a fig she doesn't like. (She'd better appreciate that she was born a few months before what might have been the best fig season I've ever experienced.) She's taken eight flights so far, has sucked down Dungeness crab in Seattle, and seemed to get a kick out of her first taste of grilled jackfruit from the side of the road in Maui. Curry udon with enough added hot sauce to make even my tongue tingle a little too fiercely? All I got was a quick cough after the first taste, followed by a big smile and more noodles down the hatch.

These experiences very closely mirror Matthew's experiences in the book, which means that I'm fully expecting the other shoe to drop within the next year or so as Alicia starts to realize that having opinions is fun and no, I don't want those curry noodles that I loved yesterday.

"Once upon a time, we placed a plate of green beans in front of Iris at snacktime, and she Hoovered so many into her mouth that she couldn't chew them and gagged," Matthew writes. "Now Iris is perfectly toothy and capable of eating a bowl of green beans but has no interest in doing so." I'm dreading the day Alicia does this, though not quite as much after reading Hungry Monkey. More than anything, the book is reassuring and empowering. I know that if Alicia doesn't like green beans, we can go on an adventure to the supermarket or the farmers market or the garden to help her find something she does like. And if she goes a day or a week without touching a green vegetable? Well, the worst that's really going to happen is that a judgy children's-nutrition blog might make you feel guilty for a moment or two.

This approach to nutrition has been great not just for Alicia, but for us adults as well. As a recipe tester, it's really easy to fall into the trap of eating only what I'm testing. Sometimes this is okay, but other times it means four straight days of Buffalo chicken wings, lunch and dinner. Cooking for a family, and specifically cooking to stimulate exploration of new flavors and textures, has led to mealtimes that are both healthier and more exciting. What we've found, as Matthew did, is that encouraging Alicia to explore by providing a variety of colors and flavors in each meal takes care of balancing our diets with very little thought or planning required.

Matthew is a comedy writer for a living, but he's clearly no slouch in the kitchen, either, and the book has over 50 recipes to prove it. These are recipes that will sound appealing to anyone, even those unencumbered by stubby-toothed spawn. Irish oatmeal with candied bacon (Iris is a bacon snob who insists on smoky Nueske's). A simple and traditional pad thai. Chard and escarole sautéed with garlic and lemon, or lobster rolls (one of Alicia's favorite foods). Each recipe comes with notes on what "little fingers" can do to help, whether that's measuring and stirring the marinade ingredients for a Sichuan noodle dish or slicing up the bananas for banana-Nutella panini.

By the end of the book, Iris is five years old and seems poised to follow in her dad's food-obsessed footsteps. Over the years since I first read it, and through the magic of Twitter, I've become friends with Matthew and have even appeared on an episode of Spilled Milk, the wonderfully funny food podcast he hosts with Molly Wizenberg. Still, it wasn't until just a few months ago that I finally met Iris.

She'd become a minor celebrity in my mind, and, as with most characters in books or films, was frozen in time, forever a four-year-old learning how to eat Sichuan noodles or begging her parents for more garam masala. This, of course, is a weird thing to think. Real people grow up and get older, and by the time I met Iris in real life, she was a young teenager. Alicia, Adri, and I had met up with Matthew and his family at Windy City Pie, a Seattle restaurant that serves what I believe to be the best Chicago-style pizza anywhere, including Chicago. Iris apparently still likes pizza.

"Oh, I know all about you as a toddler!" I said to her, only to realize, by her awkward smile, that this was probably not the first time she'd heard that phrase, and that it probably doesn't get less creepy the more frequently she hears it.

"Er, so, is your dad cool?" I offered, immediately kicking myself. When are dads ever cool to teenagers?

"Yeah, he's cool," she said, as she continued to explain that they were headed to a Magic: The Gathering expo later that week. Dear god, I hope that when my Alicia is 13 years old, she'll still think it's cool when I dress up for the new Star Wars premiere (where maybe we'll finally get that Salacious B. Crumb backstory fans have been clamoring for). I may even let her control the head section of the full-sized Jabba the Hutt costume we make together. Maybe.

Matthew may be sick of winning the dad-of-the-year award for the past 13 years running, but, with the help of Hungry Monkey in my hands, I'll hopefully be able to snag a few regional titles. I'll start with the best-dad-in-the-house award and work my way up.

You can buy Hungry Monkey: A Food-Loving Father's Quest to Raise an Adventurous Eater here. I'd also strongly recommend his other books, particularly Pretty Good Number One and Child Octopus, about his family's eating adventures in Japan and Hong Kong. 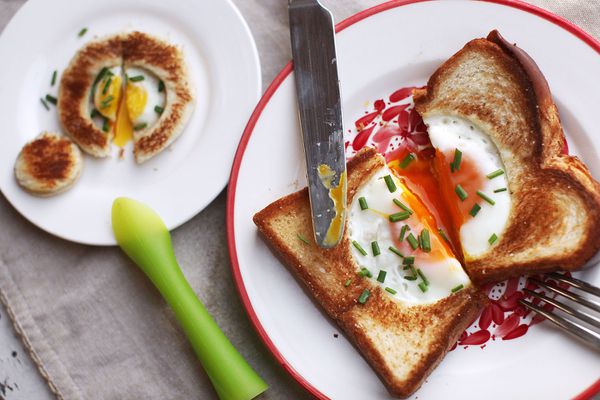