Cooking bacon for one or two people is easy: Just grab a pan and cook over moderately low heat until it's as crisp as you want it. The problem comes when you're trying to cook bacon for a crowd. Even large round pans are not made for accommodating more than a few slices, and not everyone has a baking steel griddle resting on their stovetop for these situations.

Those are the times when we either decide to skip bacon at breakfast (inconceivable!) or switch on the oven.

But what's the best way to actually cook bacon in the oven?

I tested four common methods of cooking bacon in the oven, then compared the results:

Good news: Turns out the best method is actually the easiest as well. Don't bother with racks, crimped foil, or stacked baking sheets; just lay out your bacon strips on a rimmed baking sheet and bake them in a 425°F oven until they're as crisp as you like (about 20 minutes was right for me). Drain on paper towels, and you've got a big pile of perfectly cooked bacon on your hands. If you want to make cleanup easier (and you probably do), lining the tray with heavy-duty foil doesn't affect cooking and makes cleanup a snap.

That said, you might like your bacon cooked a little differently from me, so one of these other methods may end up appealing. Here are my notes.

A Note on Temperature

Before testing each individual method, I did a quick series of tests to determine a good oven temperature for baking bacon. I cooked bacon on crimped aluminum foil set in rimmed baking sheets at four different oven temperatures—325, 375, 425, and 475°F—cooking each batch until it was crisp and well browned. At lower oven temperatures—325 and 375°F—cooking took a long time, 50 minutes and 35 minutes, respectively. At 425°F, it took about 20 minutes, while cooking at 475°F left me with bacon that was threatening to burn in spots and still undercooked in others after just 15 minutes. Clearly, the highest temperature was out.

Between 425°F bacon and 375°F bacon, there was a pretty significant difference in texture. The bacon cooked at a lower temperature was more tender, nearly dissolving in my mouth as I ate it. At 425°F, the bacon retained a lot more of its meaty chew. Personally, I kind of liked the melty quality of the lower-temperature bacons, but Adri, my wife, did not, pulling a face as she tasted.

These texture changes make sense. Tough connective tissue in both the fat and the lean sections of bacon tenderizes with extended cooking, so the longer you take to crisp the bacon, the more tender it's going to be. This is useful information no matter how you're cooking bacon: Whether it's on a stovetop or in the oven, going low and slow will produce bacon that's more likely to melt in your mouth, while higher temperatures will give your bacon more of a crisp-chewy dynamic.

At the behest of my wife, I decided to go with 425°F for the rest of my tests. (To be frank, 35 minutes is an awfully long time to wait for good bacon anyway.)

My Favorite: Directly on a Baking Sheet

This is my favorite method. Not only is it the easiest, it also produces the crispest, most well-browned bacon. True, the bacon fries in its own fat as it's cooking, which means that blotting on paper towels afterward is essential. That said, the bacon doesn't taste any greasier than other samples. In fact, the fat helps it to cook more evenly, while also protecting it from drying out or turning leathery. Of all the methods, the results from this one are most similar to bacon cooked low and slow on a griddle or stovetop.

Texture: Crisp, with a few lightly chewy bits. Fatty areas that melt nicely as you chew. Good browned flavor. Even browning, with a little buckling in the individual strips.
Ease of Setup: Very easy.
Ease of Cleanup: Very easy. (One tray to clean; nothing to clean if you use foil.)

Don't Bother: On a Wire Rack

Many folks recommend cooking bacon on a wire rack, with the idea that allowing fat to drain will leave the bacon less greasy. In practice, the bacon tastes no less greasy when it's compared side by side with bacon cooked directly on the tray. Because there's no constant contact with fat, some bits are also a little prone to drying out, and turn tougher and chewier.

There's a bigger problem, though, and that's cleanup:

Those wire racks are a pain in the butt to clean, especially when we're talking sticky bacon drippings. You need to get into each individual intersection for cleaning, and it really does a number in terms of wear and tear on your sponge or brush. No thank you.

For the Chewy-Bacon Lover: On a Crimped Piece of Foil

This is a technique I first saw used by Chef John of Food Wishes. The idea is that you fold up a piece of aluminum foil accordion-style, with one-inch pleats, then place it in a tray (I also folded up the edges to retain drippings) and lay the bacon on top of it. This elevates the bacon as a rack would, while minimizing cleanup.

It's a really neat and innovative approach. The only problem is that I'm not crazy about the results. As with rack-cooked bacon, allowing the drippings to fall away from the strips makes them cook up a little tougher and more unevenly. Even when it's fully browned, the fatty bits stay relatively moist and the lean bits end up meaty, bordering on tough. I know that there are folks who like their bacon this way. This method is for you.

Texture: Great for chewy-bacon lovers. A few crisp bits, but mostly meaty, with soft interiors.
Ease of Setup: Moderate. Crimping the foil takes some time, though it's not difficult.
Ease of Cleanup: Very easy. (Nothing to clean if you crimp the ends of the foil.)

For Sandwiches and Burgers: Between Two Baking Sheets

For this method, I line a rimmed baking sheet with parchment paper, place bacon on top of it, top with another sheet of parchment, then place a second tray on top before throwing it all in the oven. (You can also line the bottom pan with a piece of foil before adding the first parchment sheet, for easier cleanup.) This technique results in extremely well-rendered and evenly browned and crisp bacon—keeping it flat means the bacon is essentially shallow-frying in its own fat the whole time—as well as bacon that lies completely flat. The only downside is that, because evaporation is inhibited, it takes longer to crisp, about 25 to 30 minutes.

Why would you ever want flat bacon, you ask? It's mainly a boon for sandwiches and burgers, because it makes the bacon much easier to stack. BLTs for a crowd? This is the technique for you. It's also a great way to keep a bacon weave nice and flat as it bakes, like I did for my Ultimate Bacon Cheeseburgers.

Texture: Very crisp and evenly browned, with a few lightly chewy bits. Completely flat, with fat that melts as you chew.
Ease of Setup: Moderate.
Ease of Cleanup: Moderate. (The bottom tray comes out clean; the top tray might have a little bacon grease on its underside.)

In the market for better bacon? These are our favorite bacon brands that you can likely find at your local grocery store. 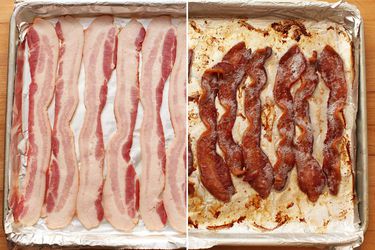 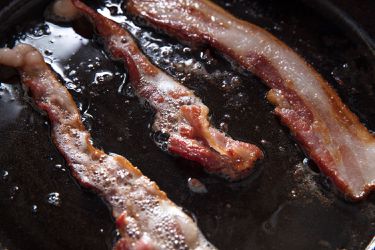