When I asked you folks for your favorite instant noodle brands on Twitter a couple months back, I was chuffed to note that a great chunk of you picked my favorite non-Japanese noodle: Shin Cup. Spicy, savory, and intensely garlicky with flavor to spare, it's in a league of its own when it comes to ramen (or ramyun, as it's called in Korea).

Here's something interesting: Japanese instant ramen stemmed from a desire to create a no-fuss, quick and easy version of the real dish. It's a sort of toned down, fast-food version. Korean instant ramyun, on the other hand, was a derivative of Japanese ramen, made with Korean flavors. That is, it's not an instant version of a "real" Korean dish. Ramyun starts and ends with instant noodles.

Until now, that is. If Japanese ramen can be engineered from a delicious simmer-all-day artisan meal into an instant lunch, why can't we do the reverse for Korean ramyun?

The flavor I was aiming for with this dish is based on the standard Shin Ramyun from a packet (check out our taste test of all the Shin Ramyun products here). I started by reviewing the ingredients list. Unsurprisingly, enriched flour and colorings, flavorings, and preservatives of various kinds dominate the ingredients, but a closer look at them can reveal their purpose. Up near the top we've got disodium guanylate and disodium inosinate, two flavor enhancers that are designed to work in conjunction with monosodium glutamate (MSG, in this case cleverly hidden in the hydrolyzed soy protein and yeast extract that appear later in the ingredients list) to up the savoriness of foods.

It's a convenient and inexpensive way to make foods taste meaty without actually being too meaty. At home, I prefer using more natural sources for my glutamates and inosinates, and Japanese-style dashi broth proved to be just the ticket.

On top of that, smoked dried bonito flakes (known as katsuobushi in Japanese) add inosinic acid, glutamic acid's partner in crime. You can use either bonito flakes or the tiny dried sardines known as niboshi, though I tend to prefer the former for the subtly smoky aroma it adds. With a good source of glutamates and inosinates at my disposal, I moved on to the rest of the broth.

Namely, the meat and aromatics.

Bring on the Beef

"Beef extract," "beef fat," and "beef stock" are the most prominent of the "real" ingredients in the soup base, along with a slew of aromatics, including black pepper, green onions, garlic, ginger, mushrooms, and chili. With these elements as my building blocks, I began building my broth.

I've never liked the flavor of canned beef broth—it tastes tinny and artificial, and judging from the ingredients in most beef broths, it's no wonder: They contain surprisingly little actual beef. Most of the flavor comes from yeast extracts and hydrolyzed vegetable proteins—the very things I'd just made my own dashi broth to avoid. Rather than use beef broth, I decided to combine my dashi with some chicken broth, giving it a rich beef flavor with the addition of some short ribs. With chicken broth, homemade is best, but even store-bought stuff does perfectly well in this recipe. Packaged chicken broth is held to much more stringent standards than beef.

Added bonuses: short ribs are packed with connective tissue, which converts to gelatin as the broth cooks, giving it a nice, rich body. And, after cooking it until tender, I could add the shredded beef back in as a garnish for the soup.

Browning the beef before simmering the broth adds an extra dimension of flavor. I also decided to take a page from my Japanese tonkotsu ramen recipe and brown onions and ginger to increase that roasty aroma and enhance their natural sweetness.

For the remaining aromatics, I added garlic, scallions, and a good dab of gochujang, a fermented Korean chili and soybean paste.

After simmering for four hours—long enough to fully tenderize the beef—I was left with a broth that was tasty enough with plenty of body, but it wasn't quite right. It lacked the punch, brightness, and intensity that I was after.

Kimchi is not listed in the ingredients of Shin Ramyun, but there is plenty of chili, garlic, radishes, and acidity regulators, all of which give it a kimchi-esque aroma*. I tried adding some kimchi juice to the mix. Definitely a step in the right direction, but not quite there yet.

What's missing? A touch of soy sauce brought it closer, as did a good sprinkle of kochukaru, but it was still missing that intense garlic and chili hit. The solution? Doubanjiang, a Chinese chili and bean paste. It's not a traditional part of Korean cuisine by any means, but it was exactly what my broth needed to complete its flavor profile. Bright and fresh with an intense heat that builds as you sip it, supported by a complex, savory backbone from the beef, sea kelp, chicken broth, and smoked bonito. This is a broth with some real complexity.

If you made your broth right, it should have so much body that it gels into a solid block when you refrigerate it overnight.

Last step: adding the garnishes. Instant ramyun comes with packets of dehydrated garnishes including chili pepper, scallions, mushrooms, and thin flakes of beef. We can do better than that. For the mushroom and beef element, I decided to sauté hon-shimeji mushrooms in hot oil until well-browned before adding my shredded short rib meat.

The fatty meat crisps up in the skillet just like good Mexican taco meat, adding both flavor and texture to the finished bowl.

I already had the kimchi drained and ready, so that went on top as well, along with the requisite shower of thinly sliced scallions. Finally, add an egg—soft-boiled so that I can stir the yolk into the broth—and we've got a meal worth waking up early for.

Just so we're clear, I've got absolutely nothing against instant Shin Ramyun. Indeed, I ate one for lunch just last week.

But just so we're clear on another point, we've just gone from this:

That's an upgrade I can choose to abide by every once in a while. 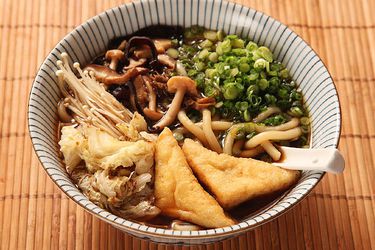