All month, the soup's on, with over a dozen new recipes coming at you for everything from simple 15-minute meals, to updated homemade versions of the canned classics you loved as a kid, to all-dayers that are hearty enough to eat like a meal.

Remember that old folk story, Stone Soup? The one about the hungry travelers who have completely run out of food, but still have a pot to cook in? They start off by filling the pot with water and placing a large stone in the bottom, setting it to boil over a fire. A villager walks by, takes a look at the pot, and ask what's going on. The clever travelers explain that they're making stone soup, a very delicious soup that would be even more delicious if the villager could lend them a vegetable or two for garnish. The villager gladly obliges, adding an onion to the pot. One by one, the rest of the villagers come by, each one adding a new ingredient to the boiling soup. Finally, everyone, travelers, villagers and all, sit down and enjoy the great soup they've all made together.

Heartwarming. Except here's the sad truth: that soup was not very good.

You see, you can go the route of just dumping ingredients into a pot of boiling water and you'll end up with a soup that's plenty nourishing for the body, but as any chef or grandmother will tell you, if you want a soup that's as tasty as it is hearty, a soup that's soulfully good, then a bit of technique is in order. Almost all truly great soups start with sweating, sautéing, browning, or otherwise cooking ingredients in the pot before ever adding the actual soupy liquid element. And, depending on this pre-liquid technique, you can achieve vastly different end results using the exact same starting ingredients.

Take, for example, this rich, savory, and spicy black bean soup flavored with smoky chorizo and chipotle peppers, with tender braised chicken. Now, I could just add all the ingredients to a pot, set it simmering on the stovetop, and come back a while later to a perfectly satisfying meal. But by taking a few extra steps, I end up with a bowl of soup that'll knock your socks off with flavor. I'm serious. Knock. Your. Socks. Off.

There's a scientific explanation for this, of course (the effectiveness of pre-liquid techniques, not the sock-knocking). Once the liquid element of a soup goes into the pot—whether it's wine, stock, or water—the temperature of the contents can no longer exceed the boiling point of water, 212°F (100°C). Reactions that take place at much higher temperatures—like caramelization and Maillard browning, which add depth and savoriness—are halted.

Case in point: this chicken. The first step to this soup is browning your chicken in the bottom of a soup pot in a thin layer of very hot oil. And when I say brown, I mean seriously brown. The deeper the color, the more complexity you'll create. Because we're going to be braising this meat, I like to use chicken drumsticks or thighs, which have a lot more connective tissue that can stand up to a long cooking process (breast meat just dries out), and adds more flavor to the final soup in the process.

After browning the chicken, you should end up with a layer of browned bits stuck to the bottom of the pan. These are created when protein-rich juices are exuded from the chicken and reduce in the hot oil. As their liquid evaporates, the proteins are left behind. You don't need to know any of this to know that the French call it fond and I call it delicious.

Next up, slices of chorizo, the smoked, dry-cured variety. This particular chorizo is Mexican, but Spanish brands flavored with smoked paprika would also be delicious. As soon as they go in, I use the steam they produce to help scrape up the chicken's fond from the base of the pot. As with the chicken, deep browning is the goal here. I like to go until the edges are crisp and nearly charred.

Now for the aromatics.

Many ingredients—onions and other alliums in particular—contain chemical precursors that interact with each other in the relative close proximity of a liquid-free pot. As these precursors interact, they produce compounds that give onions their characteristic aroma. That's why chopped onions being sautéed in olive oil smell so darn good. Once you add the liquid, those precursors get diluted, slowing down their interaction and altering the flavor of the finished dish.

In this case, I'm using scallion whites (I save the greens for garnish) and garlic along with some finely minced serrano pepper as the aromatic base for the soup. Cook them until their exuded moisture mostly evaporates, the vegetables are completely tender, and the whole thing starts sizzling vigorously before adding a quick hit of ground cumin.

As with the other aromatics, toasting cumin in oil helps develop a deeper, richer flavor as new compounds are created.

We're in the final stretch of flavor layering here. The last ingredient is some finely minced canned chipotle peppers in adobo sauce. Like the chorizo, these peppers are smoked, which means that even before you sauté them, they're packed with flavor. It's a really easy way to add a quick hit of heat and savoriness to soups and stews.

With all that out of the way, now is the time to finally add the liquid. If you have some great homemade chicken stock, use it. If not, we've got so many other great flavors going on in here that store-bought low-sodium stock will do just fine. The browned chicken goes back in the pot along with a couple of bay leaves and some black beans that have been soaked overnight in salted water.*

*You can get away with using canned beans for a quicker version of this soup, but dried beans will produce superior texture and absorb more flavor.

You might have heard that salting beans before they're done cooking is a big culinary no-no that will result in tough beans. So what gives?

Turns out, the skins of dried beans consist of cells that are held together with pectin, a sort of natural glue. Pectin is strengthened by magnesium and calcium ions present in the skin. Over the course of an overnight soak in salt water, sodium ions play musical chairs with the calcium and magnesium, which in turn leaves your bean skins softer, easier to cook, and less prone to bursting. That "no salt until cooked" myth is nothing more: a myth with no basis in reality. Salt away, young cricket, salt away.

After their overnight soak and hydration, the beans only take about 45 minutes to completely tenderize, which is luckily about how long it takes to tenderize chicken drumsticks. Don't you love it when things work out like that?

To add some extra body to my soup, I like to blend up some of the beans and chorizo to form a thick paste-like slurry.

Not only does this paste make the soup thicker, it also acts as an emulsifier, helping the fat—exuded by the chorizo and the chicken—incorporate smoothly into the soup, rather than forming an oil slick along the top.

Unlike in my Braised Chicken with White Beans and Chile Verde recipe, the skin on this chicken won't stay crisp. It's a trade-off: in this case, that great browning that we got at the beginning all goes towards flavoring the soup. I peel off the spent skin and discard it (or save it for the dogs) before serving this soup.

Does anybody else have a deep-seated childhood love of the fixin's bar at Roy Rogers? There's something great about being in charge of the flavor of your meal. The final step in this soup is to add some bright freshness to the bowl. I like to do that in the form of a DIY mix-ins setup with sliced serrano peppers, scallion greens, lime wedges, fresh cilantro, sliced avocado, and some Mexican-style crema to help tame the heat from the chipotles and Serranos.

If you want to be extra-nice to your dinner guests, you can shred the meat off the chicken and mix it into the stew, but I actually prefer the fun of serving a bowl of soup that comes with a knife and a fork. It makes the whole thing all the more meal-like. Not that you'll have any doubts about that with a dish this hearty, but if it's worth taking the time to make it right, then it's certainly worth taking the time to eat it right, agreed?

I apologize in advance for any socks lost while serving this recipe. 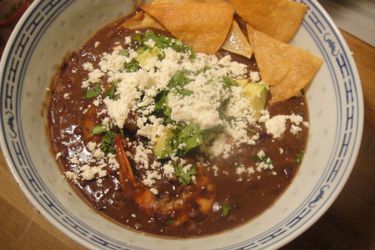