Deeply browned scallops with a sweet, caramel-colored crust and a tender center.

I remember a night, oh, a decade or so ago, when I decided to cook a scallop dinner for some girl I was trying to impress. That I don't remember exactly who this person was is a clue as to how the night went. I'd been cooking scallops for years in restaurant kitchens with no problems. I got this one in the bag, I thought. All I had to do was heat up some oil in a skillet until it was screaming, smoking hot, add the scallops, and cook them while basting them with butter until they were deeply browned, with a sweet, caramel-colored crust on their surface, before flipping them and repeating the process. I'd done it countless times on the line. Time after time, my scallops would come out sweet and crunchy, with a tender, springy center that was never rubbery. How different could it be at home?

Quite different, apparently. At home, with my romantic prospects for the evening hinging on proper execution, my scallops refused to cooperate. They hit the smoking-hot pan, sizzled for a brief moment or two, then started to fizzle down, releasing a flood of liquid onto the metal that quickly evaporated into a cloud of steam. I kept cooking them, waiting for that steam to dissipate so that the scallops could actually start to get some color. A few minutes later, I dumped them out onto a plate, and they landed with a rubber-ball bounce that revealed their texture even before we tried to bite into them. Pale, flaccid, and plain old not good, just like my chances for the night.

In a way, this was a good thing, because that girl did not become my wife. My wife, Adri, and I started dating well after I'd figured out exactly what went wrong with this first disastrous attempt, and we've enjoyed many scallop-fueled evenings since.

The problem came down to two things: using the wrong scallops and mismanaging moisture. Let me give you some details so that you (and your date!) won't suffer the same fate.

The first problem with scallops occurs before you even buy them.* Many scallops are treated with sodium tripolyphosphate (STP), a chemical that, while perfectly safe to consume, wreaks havoc on your ability to achieve a proper sear. In the industry, chemically treated scallops are called wet scallops, and they're the norm in most supermarkets, including the one where I'd bought mine.

*All of this is ignoring the worst of the worst offenders: those shady mongers who are said to sell "scallops" that are actually other fish punched out with circular molds. I've heard rumors of their existence, but I have never, ever seen this in the field.

Why is it added in the first place? STP loosens the structure of proteins in scallops, causing them to suck up excess moisture like a sponge—up to 30% of their original weight. This is good news for fishmongers who sell scallops based on weight, but bad news for consumers who are paying top dollar for added water, not to mention the soapy aftertaste treated scallops can have.

Wet scallops have a ghostly, opaque, pale white or orange-white appearance. Dry scallops will be fleshier and more translucent.

What's worse, the treatment makes scallops nearly impossible to sear properly, as all that excess moisture floods the pan as soon as the scallops start to cook. Your scallops end up deflated, rubbery, and anemically pale.

There's only one good way to deal with wet scallops: Don't buy them in the first place. No matter how good that price may seem, you'd be better off just eating the plastic bag you bring them home in. In the hierarchy of things to avoid in the supermarket, wet scallops rank just underneath lemon juice in a plastic squeeze bottle and industrial ricotta.

Dry scallops, on the other hand, are untreated and therefore expel less moisture as they cook. Sure, they're pricier—they have a much shorter shelf life, and their price per pound isn't artificially deflated with excess water weight—but they more than make up for it in superior quality, flavor, and ease of cooking. Not only that, but because they aren't treated, they're almost certainly fresher when you find them at the fish counter, with a sweeter, brinier flavor.

So how do you know which scallops you're getting? First off, check the label. Fish counters selling dry scallops will most likely be proud of that fact and label them as such. Second, look at the container the scallops are held in. If there's milky white liquid pooled in it, odds are those scallops are treated. Finally, take a look at the scallops themselves. Wet scallops have a ghostly, opaque, pale white or orange-white appearance. Dry scallops will be fleshier and more translucent.

Once you've got yourself the right scallops, your battle is 90% won. But there are still a couple of small obstacles in the way. Even though dry scallops expel far less moisture than wet scallops, they can still throw off a dangerous amount of water as they cook, forcing you to use up precious energy from the pan for the massively inefficient process of evaporation.

With a restaurant range and its powerful burners, this isn't much of a problem—that water evaporates, and the scallops brown just fine. But at home, where our burners aren't nearly as strong, it's more of an issue. Evaporating water takes a huge amount of energy, and that's all energy that could be used for browning your scallops.

A much better route is to simply get rid of as much of that moisture as possible before you start cooking. Leaving the scallops uncovered in the fridge overnight works, but only if your scallops are super fresh to begin with (you don't want them turning on you). I've even seen people par-cook scallops in the microwave to expel moisture before searing, but it's too difficult to control just how much they cook with that method.

My favorite technique is to simply salt the scallops and let them rest on a paper towel–lined plate. The salt draws liquid out of the scallops, and the paper towel wicks it away. Your scallops will be dry to the touch in just about 15 minutes.

We're on the home stretch here—all that's left to do is sear them. I start with a stainless steel or cast iron skillet, coated with plain vegetable or canola oil and set over high heat until the oil starts to smoke lightly. If you have clarified butter on hand or are willing to make some, it's a good choice for searing. Don't try to sear scallops in regular butter, the milk solids will burn and end up as black flecks on your otherwise-gorgeously brown and cream-colored scallops.

You want a pan that is large enough to hold the scallops and leave enough room to allow the moisture to evaporate rapidly. Once the pan is smoking, the scallops go in.

I cook them without moving them until a little peek underneath reveals a deep golden crust. Do not flip those scallops until the crust is formed. It's better to cook the scallops all the way through on the first side and just let the second side kiss the heat if that's what it takes to get a crust on that first side.

A perfect crust on top with a pale underbelly is more desirable than two sides that are soft and pale.

Which is not to say that that's what you'll get. If you've followed all of the drying steps properly, and if you started with a screaming hot pan, you should have no problem crusting up both sides of those scallops on even the most average of home ranges.

As soon as the scallops are done, I transfer them to a paper towel–lined plate to blot off any extra fat while I put together my dinner plates. And there we have 'em. Sweet and nutty with a nice golden-brown color, just like the girl I married.

Scallops just beg for bright, sweet, fresh vegetables to accompany them. Peas and scallops in the spring make a classic combination, but in the summer, I can't think of anything I want to eat with scallops more than corn and tomatoes.

So that's exactly what I did. Come to think of it, one of these days I ought to share my secret technique for making creamed corn with no cream at all. But not now. For now, I eat.

Dry scallops are fresh scallops that have not been chemically treated to retain moisture. Look for scallops that have a fleshy, translucent white or pale tan color. Avoid wet scallops, which are pale, milky white and often sitting in a pool of milky liquid.

If the scallop "feet" (the small, hard muscles attached to the main bodies) are attached, they should be removed and discarded before cooking. 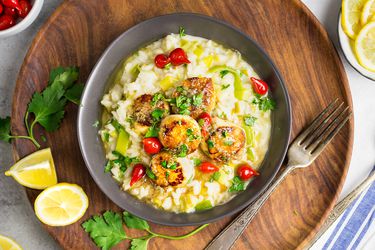