I have just cooked and consumed what may have been the single greatest burger to come out of my kitchen. And my kitchen averages about a dozen burgers a week. Want proof? Just smell my wife's hair. Eau de bouef. (Sorry dear).

We'll get to that burger, but first, a little background:

A couple of weeks ago, I asked Vogue food writer Jeffrey Steingarten about his thoughts on the Shake Shack's burger. His reply? "It's 4 ounces. That's too small to ever be a great burger."

Then, a couple nights ago, I asked The Hamburger: A History author Josh Ozersky what his last burger on earth would be. His response? "White Diamond, Bill's, maybe Rub's. Not sure, but It would definitely have to be something 4 ounces or less."

These two equally valid opinions represent what I consider to be one of the great dichotomies of the burger world. Those who prefer the small, thin, 4-ounce or less, smashed-style of burger (à la Shake Shack or Bill's), and those who prefer thick, medium-rare, 6 to 8 ounce pub-style behemoths (à la Corner Bistro or Minetta Tavern).

The crux of the matter is this:

A smashed burger, like the one here, places emphasis on the all-important sear. As long as you get a flavorful, well-browned, salty crust on the meat, who cares if you give up a bit of juiciness—that's what oozy fatty American cheese is for, right?

"Besides, flavor is what bacon is for, right?"

In the other camp, however, are those people that prefer the mouthfeel and satisfying heft of a burger that's thick enough to retain a medium rare center. The problem is, there's a reason why steak tartare comes served with chopped pickles, shallots and capers: Rare ground beef doesn't have all that much flavor. For the people who fall in this camp, it's not worth it to try and up the ratio of flavorful crust if it means losing some of the juicy, medium rare center. Besides, flavor is what bacon is for, right?

Being a die-hard member of the thin, crusty, but-maybe-not-too-juicy camp, my goal this week was to analyze the technique of burger smashing, and come up with a method that optimizes juice retention without losing any of the flavorful crust. To that end, I made a couple dozen smashed burgers, changing the strength and timing of the smashing each time.

Time to Squeeze Some Burgers

In order to gauge the amount of juices being lost I placed each patty in a citrus juicer and squeezed every last drop of juice (a combination of rendered fat and intramuscular liquid) out of them.**

**Full disclosure: you need to get in there with your hands a bit to get the last few drop of juice out.

Alton Brown is adamant about throwing out any tool that does not have more than one use, so I'm glad I get to keep my juicer.

The problem? My results were pretty boring. Turns out that as long as your temperature and cooking time are the same (2 minutes at 600 degrees for mine), and you don't touch the burger after the initial smash (which can take place at any time up to 45 seconds after you've placed your burger on the hot surface), the amount of juice it retains is pretty much the same no matter what you do—about a tablespoon for every two ounces of 85/15 ground beef.

On the other hand, I now had in my hands a pretty exciting new product: seared burger juice. Composed of about 25% fat and 75% liquid, the juice had all of the flavor of a perfectly seared, crusty brown burger. Close your eyes and hold it under your nose, and you wouldn't know the difference.

The only question that remained was, what could I do with it?

How to Make Juice-Filled Burgers

Since all the flavor of a great seared burger was trapped in this bowl of liquid, what if I were somehow able to incorporate that flavor into a thicker, juicier, pub-style burger to get the best of both worlds?

Are you pondering what I'm pondering, Pinky?

Remember that scene in Willy Wonka and the Chocolate Factory when Gene Wilder, in reference to his Wonkavision says, "if they can do it with a photograph, why can't I do it with a bar of chocolate?" Replace "a photograph" with "liquid-center bubble gum" and "bar of chocolate" with "hamburger," and you have a pretty good idea of what was going through my head.

The execution was simple. I froze two tablespoon of seared burger juice in a small bowls while I measured out two 3-ounce balls of ground beef which I formed into thin patties. One of them, I gave cupped edges. Then, Jucy Lucy-style, I placed the frozen disk of burger juice inside the cup of one patty, placed the other patty on top, crimped the edges, and carefully sealed, and re-formed the burger into one large patty.

To cook the patty, I heated up oil in a high-carbon-steel crepe pan (my favorite pan for cooking small batches of burgers—they hold even heat like cast iron, but heat up much faster than the thick skillets) until it was smoking hot, then added the patty. Everything was going well until I flipped it, whereupon the patty split open, juice gushed out, hot fat spattered, the skillet caught fire, and I dumped the whole thing into the sink.

I fired up one more burger, this time remembering to prick is with a toothpick as soon as I flipped it over in order to provide a channel for some of the steam to escape and prevent premature eruption. For good measure, I added a slice of cheddar. The bun was a toasted Arnold's (which, as you can tell by its relative lack of freshness, had been in my fridge for a week).

"It literally had the juice of two burgers inside it, which sprung on me like a soup dumpling on an unsuspecting dim-sum newbie."

Despite knowing what was inside, I was totally unprepared for the torrent of flavorful juice that gushed into my mouth as I bit into it. It literally had the juice of two burgers inside it, which sprung on me like a soup dumpling on an unsuspecting dim-sum newbie.

Though I was expecting it to have a hollow center filled with juice, the results were actually far better: the juices melted and soaked into the meat as the patty cooked, resulting in a burger that doesn't really seem different from a normal burger, other than the fact that burger is just as flavorful in its medium rare center as it is on its crusty exterior, and that it is ridiculously juicy.

If Snooki were a bun, she'd be all over this juicehead of a burger.

Now to come up with a name. I asked the Burger Lab's Facebook community for input and got quite a few good responses. Lava burger, Slurpy Joe, Truffle Shuffle, Goo-Burger, etc. For now, I'm going with "Flood Burger," but if you've got better ideas, I'd love to hear them!

I figure naming this burger will be good practice for when Adri and I eventually have to name our kids, who will only be slightly less important than ground beef. 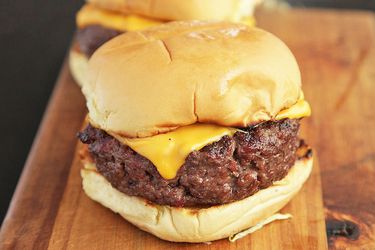