You know what the greatest thing about recipes is? There's always a better one to come along. I mean, I've already posted recipes for the so-called Ultimate Sliders, only to have them quickly supplanted by the (more) Ultimate(est) Perfect Sliders and most recently the In-N-Out, Telway, White Mann Ultimate Animal-Style Slider Mashup, and those are just tiny burgers we're talking about.

Point is, my cooking is constantly evolving and improving, and I wouldn't have it any other way. Just as humans evolve much faster in certain ways than others (I mean, we've got the opposable thumbs but are still stuck with good-for-nothing earlobes, appendices, and vestigial tail structures), certain types of foods tend to go through faster development cycles in my repertoire. Burgers in the summertime are one of em.

Just a couple weeks back, I wrote about a quick and easy method for getting any type of cheese to melt like American, the idea being that the gooeyness and meltability of American cheese are awesome, but it lacks real flavor.

I achieved this goal by steaming real cheese (Comté or really sharp cheddar are my favorite) in a bowl with a bit of Wondra flour and milk. It's a good recipe, it uses pantry staples, and it works, but know what? It still had some problems. I mean, the cheese gets gooey and stretchy, but it doesn't quite achieve the glossy sheen or lava-flow of real American cheese. I was content with it, and on a burger it worked great. But in my heart of hearts, I knew there must be a better way. (Preferably a way that doesn't involve the sodium citrate prescribed by most books espousing modernist-style cooking (Heston Blumenthal, Nathan Myhrvold, et al.))

The steamed cheese recipe works when it's hot, but let it cool down and try to reheat it, and it separates just like any real cheese does:

As it happens, just a couple weeks ago, my good friend, former colleague, ex-roommate, best-pastry-chef-I-know, soon-to-be-Serious-Eats-writer Yvonne revealed this sweet recipe after a summer's worth of hard work over on the America's Test Kitchen Feed: a method for making your very own American Cheese Slices.

Here's what she had to say:

I'm not afraid to admit that I love American cheese—by itself, on a grilled cheese sandwich, on a cheeseburger, or even just slapped on a plate and microwaved until it's nice and gooey (a childhood pleasure that I never grew out of). But what exactly is American cheese? I suppose it's that exact question that gives it such a bad rap. The American cheese that you find on supermarket shelves isn't cheese made in the traditional way (milk that's formed into curds and pressed). Instead, it's either a blend of cheese and additives, or it's a highly processed mixture of ingredients such as water, milk, milkfat, milk protein, whey, food coloring, flavorings, and emulsifiers. I wanted to get as close as possible to the taste and texture of American cheese using only pantry ingredients and a food processor. By making your own American cheese, not only will you know exactly what went into it.

How does she accomplish this goal? She starts with grated Colby cheese—a very mild yellow cheese that forms the base of most American-style cheese slices. (I used a young white cheddar instead.) After pulsing it in the blender with a bit of salt, cream of tartar (for its tang), and whole dry milk powder (for a rich, milky flavor), she pours in hot milk to which some bloomed gelatin has been added before pouring the whole thing into a mold to chill and slice.

Following her recipe yields an end product that is exactly as she promises: Homemade American cheese, no better and no worse. It's made with Colby, so has the same mildly salty, vaguely cheesy flavor. A pretty noble goal, though I'm personally not very squeamish about those hard-to-pronounce words on the packaging. Most of them are found in nature anyway, without the scary names.

See, if I'm going to make my own cheese slices, it's because I want to use a more flavorful cheese in order to get an end product that melts like American but tastes like something better. I wondered to myself whether or not I'd be able to tweak her recipe to meet my own goals.

First off, the gelatin trick is genius. It not only acts as an emulsifier, helping fat and liquid to keep from separating as the cheese cooks, but it also has the unique characteristic of forming a stable matrix at room or fridge temperatures while also melting into a liquid at temperatures not too far above body temp. (The precise temperature depends on the type of gelatin and the amount used.) This is exactly what you want for cheese slices.

Starch-thickened cheese recipes like a bechamel-based cheese sauce show melting characteristics that soften pretty much linearly with temperature. With gelatin, on the other hand, your cheese goes very rapidly from being solid and handle-able to melty and gooey.

Here's a quick and dirty completely imprecise but pretty accurate picture of what's going on:

What this means is that you have a large window where your cheese is still solid and handleable, but once you heat it up just a little bit, it quickly turns gooey and stretchy. Nice, right?

Now to add some flavor. Simply replacing the soft, easily meltable Colby in her recipe with a stronger cheese—I used a two-year old cheddar for mine—didn't work. The cheese never came together in the food processor and turned greasy when it was subsequently melted. I tried whisking it up in the pot, but that was a bust too.

Problem is, older cheeses are lower in moisture and higher in fat, and emulsions—the difficult-to-achieve stable marriage between two liquids that don't normally get along—require either the perfect ratio of fat to water, or a heck of a lot of emulsifiers—agents that act as liaisons between fat and water, allowing them to play nicely with each other.

When working on my recipe for cheese sauce for nachos or fries almost exactly a year ago, I discovered that the best liquid for accomplishing both of these goals is this:

Evaporated milk. Because it's had both water and fat content removed from it, evaporated milk is extremely high in protein, and these proteins are great emulsifiers. It's also got an extra-concentrated, slightly sweet, slightly cooked milky flavor—I figured replacing the combination of regular milk and dry whole milk powder* called for in Yvonne's recipe would kill two birds with one ingredient.

Despite the eminent availability of powdered skim milk powder, I had to try three different supermarkets before locating whole milk powder.

I gave it a shot, following her proportions exactly (1 cup plus 2 tablespoons of evaporated milk for 12 ounces of cheese). It worked. With the boosted emulsifying properties of evaporated milk, I was able to make smooth cheese sauce that hardened into sliceable chunks even with my two-year old cheddar. When cooked into a well-contained grilled cheese sandwich, it worked great. On a burger, however, it was a tad bit meltier than I would have liked it to be (and by "tad" I mean I ended up with a nice serving of cheeseburger soup):

(I may have just found a replacement for my cheese sauce recipe.)

Reducing the amount of evaporated milk down to 4 ounces solved this problem, yielding a cheese with close to ideal melting characteristics, though I found that with the reduced amount of liquid, I could no longer simply blend everything together in the food processor (4 ounces of hot milk just isn't enough to melt 12 ounces of cheese), resorting instead to whisking everything together in the pot over low heat.

Now we're getting close. Only one problem remained:

Older cheese are tastier, but a large part of that tastiness has to do with their higher concentration of flavorful amino acids (the building blocks of proteins). In particular, the amino acid tyrosine has a tendency to form small, crunchy crystals inside an old, dry cheese like my cheddar. Simply whisking it on the stove top yields melty cheese that's gooey enough, but it's still got discernible chunks of crystallized tyrosine in it, giving it a slightly grainy texture and appearance.

Like the annoying kids in school who end up disrupting the whole class, there are probably chemical solutions to the problem—something or other I could add to make the tyrosine crystals behave and the whole thing run smoothly, but I'm an old fashioned guy, so my gut reaction was just to administer some good old mechanical beating* with the blender. I mean, it made the fat kid from The Goonies get back in line, didn't it?

The regular blender or food processor worked, but a handheld immersion blender was even easier.

Note: I do not condone solving real life behavioral problems with immersion blenders!

You'll see it magically transform from grainy to glossy right before your eyes. All that was left now was to form it into slices, and that's easier than you think.

You could, at this point, pour the melted cheese into a cup or a loaf pan to form into a block that you can slice and use at will, but the slices you get won't have that distinct perfectly square shape that drapes so nicely on top of a burger. For those, you'll need to use a method that more closely approximates the actual process for making sliced American cheese (check out the awesome video here for more on the industrial cheesemaking process), namely, forming it into one gigantic-but-thin slice and subsequently cutting it into square.

Heston Blumenthal recommends lining a rimmed baking sheet with a silicone liner, pouring the cheese on top of it, then letting it set. This works well, but I find that plastic wrap on a really large plate or baking sheet works equally well for the job

This method has an added advantage over the block-then-slice method because once you pour the cheese in and toss it in the fridge, its wide, thin shape and great surface area to volume ratio lets it chill quite rapidly. Instead of waiting three hours for a block of cheese to cool and slice, you get ready-to-use cheese slices within about 10 minutes of pouring.

Finally, the plastic wrap gives you one last perk: when cutting the cheese slices, if you transfer the entire extra-large cheese slice to a cutting board, you can cut through the cheese and the plastic wrap together when making your square slices. That way, when you stack them all directly on top of each other, they end up each separated by a sheet of plastic wrap, making them easy to store, peel, and use as desired.

Sure beats making a run down to the supermarket for me!

Start with a toasted bun with plenty of homemade mayo.

Oozy slice of cheddar cheese melting over the top of a hard-seared smashed burger patty.

Yes, yes she will.

>>Get the full recipe here! 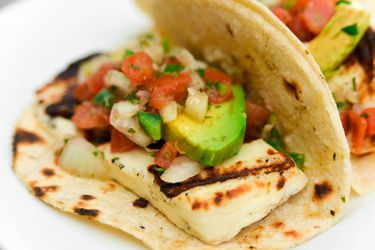