A friend—who for some odd reason trusts my musical advice, or at least pretends to—asked me a question about the great Who number "Pinball Wizard" the other day, and as always happens when I think about that song, the best line got stuck in my head for a good three days. There's something about the image of a kid who's "got crazy flipping fingers" that's just funny to me.

All this has nothing to do with burgers, other than the "crazy flipping" part. I posed a simple question on my Facebook page the other day: When cooking a burger, how many times do you flip it?

As you can imagine, the responses fell overwhelmingly into the "single flip" camp. It seems that so-called "nervous flipper"—you know, the backyard griller who, like a chimp at the Bronx Zoo, can't seem to leave his meat alone—have a bad rap in the food world. Some commenters even went so far as to resort to ALL CAPS: "How can you even ask this question? ONE FLIP!"

Well, I've always been of the mind that if an answer exists—and clearly, there is an answer to this—then the question is worth asking. Fortunately, this question is one that's fairly straightforward to test.

Those on the "one flip" side (22 out of every 23 people, according to my Facebook data), claim "more even cooking," and "better flavor development," as the selling points of the method. Curiously, the few people on the "multiple flips" side (which, incidentally, has some heavy-hitting supporters including Harold McGee himself) claim the exact same benefits from multiple flips, adding in "shortened cooking time" to the mix.

Will Flip For Data

To test this, I formed a dozen 1/2-pound burgers into equal-sized patties*, seasoned them just before cooking with an equal amount of kosher salt and black pepper, then seared them in a steel skillet pre-heated to 450°F (which I temped with an infrared thermometer before adding the patties). The ambient air in the kitchen was at an unbearably hot 76°F (my Colombian wife was home, and thus the heating was on full blast**). Each patty was cooked to an internal temperature of 125°F, and was then rested for five minutes at room temperature before being autopsied for examination.

*The theories tested here only apply to thick burgers—thin patties are an entirely different beast.

**Are you all tired of hearing about her yet? I apologize. We both work from home, so we don't get to see much of the real world.

A scale and ruler were used to collect data on moisture loss, external browning characteristics, and internal cooking pattern, while the overall degree of pleasure contained within each patty was ascertained via a standard oral mastication assay (aka, eating it).

The only variable in cooking was the number of times the patty was flipped, ranging from once every three and a half minutes (resulting in a single flip during cooking), down to one flip every 15 seconds.

Can you spot the difference between these two burgers? I have trouble too. Those of you who knew where Waldo was as a kid probably noticed that the patty on the right—the one-flipper—has a slightly more distinct searing on the top, while the sides remain relatively uncolored. The patty on the left—flipped every fifteen seconds—has a top that's a tiny bit less colored, but is more evenly browned all the way around the edges. Overall, the total amount of browning seems pretty close to equal.

The interesting part, however, is that the patty on the left took about 2 minutes less time to reach an internal temperature of 125°F than the patty on the right—a time savings of nearly one-third!

"As you add more flips, on the other hand, what you are essentially doing is approximating cooking both sides of the burger simultaneously"

Why is this? It's because when cooking via a single flip, as you flip the burger over, the second side will be barely any warmer than it was when the whole patty first went into the skillet. Your cooking time is only half way done. As you add more flips, on the other hand, what you are essentially doing is approximating cooking both sides of the burger simultaneously, albeit on a slightly lower-heat surface. When you flip the patty, little enough time passes that the upward-facing side barely loses any heat to the outside environment. The end result is that while each individual side takes slightly longer to cook, because they are cooking simultaneously, the overall cooking time is shorter.

Weighing the patties revealed that moisture loss was pretty much at a consistent 17-19% across the board for all patties concerned, with no trends linked to number of flips.

Now hand me my scalpel, It's time take a look inside.

It's not a horrible burger, by any means, and I wouldn't send it back, but surely we can do better than this, right?

Now here's the burger that was flipped every fifteen seconds. It appears slightly more well done than the previous burger (I'm guessing I misjudged the center of the burger when temping the first one). The interesting thing to note, however, is not the overall doneness of the meat, but the differential between the most cooked parts, and the least cooked parts—in particular, to the amount of overcooked meat around the edges.

In this patty, the amount of dessicated, well-done meat on the top and bottom is limited to just about 3/16-inch around the outer edge—that's 40% less overcooked meat than the first one, and the burger cooked in just two-thirds of the time!

Charting the ratio of overcooked meat to the overall burger for various amounts of flipping, you get this:

So, according to empirical data alone, the multi-flippers are right!

And how did they taste? Well, to be honest, there wasn't a huge difference between any of them. I would be very hard pressed to put them in the correct order, or even pick out the best and worst if I were blind-folded. Although of course, this testing doesn't take into account variables like cooking at a higher or lower heat, getting nice grill marks on an outdoor grill, or the fact that unless you've got eight arms, manning a grill full of burgers at the backyard BBBQ*** is a pretty tall order.

My real question now: is it possible to do better? Could I produce a burger that has almost no overcooked meat at all?

On the Flip Side

The meat you are looking at has not gone off. It is in fact, a perfectly cooked, juicy, and succulent patty. So why does it look so horrible?

Thinking back to past experiments I've done with prime rib, I knew that cooking burgers, as with cooking any meat, is an eternal struggle between maintaining a low temperature in the interior, and hot temperature on the outside. Allow myself to quote... myself:

"125°F (or 51.7°C) is the temperature at which beef is medium rare—that is, hot but still pink, cooked but still moist and able to retain its juices. Any higher than that, and muscle fibers start to rapidly shrink, forcing flavorful juices out of the meat, and into the bottom of the roasting pan.

"310°F (or 154.4°C) is the temperature at which the Maillard reaction—that wonderfully complicated process by which amino acids and reducing sugars recombine to form enticing roasty aromas—really begins to take off. At this range, meat will quickly brown and crisp."

And so it is with a ground beef patty as well.

Once that realization was made, it was a quick step to discover that cooking a burger is just like cooking a roast on a small scale: to maximize the degree of medium rare center, you must first cook it in a low temperature oven (around 200 to 225°F). Once it is cooked to within about 10 degrees of your desired finishing temperature, pull the gray mass out of the oven (incidentally, the exterior is gray because of oxidation reactions hastened by the warm air in the oven—not because it is overcooked), simply sear it in a ripping hot skillet to color the outside, and you're done.

By allowing it to first cook in the oven, the exterior dessicates a bit, and goes into the skillet warm, greatly decreasing the amount of time it needs to achieve good coloring—from about 2 to 3 minutes per side to about 45 seconds per side— thus reducing the amount of overcooked meat under the surface.

As you can see, the layer of overcooked meat is all but eliminated. The result is a burger of unparalleled succulence. I'm more of a thin, pressed burger guy myself, but here's one thick burger that I might actually enjoy.

Loath to heat up the oven for a burger? Well, unfortunately, you gotta pay your dues if you want to sing the blues. Besides, I'd easily argue that the oven actually cuts down on the amount of work you need to do. Since most of the cooking gets done in the oven and searing time is minimized, I've found that clean up is a easier, you get a little less beefy odor hanging in the air, and your wife will love you a little bit more. (I can come back to my apartment after a week long vacation and wonder whose opened up a burger shop inside—the odor lingers that long).

The best part? The number of burgers you can cook simultaneously is limited only by how many you can fit on a sheet tray (they can be seared off in batches after baking). So easy that even that deaf, dumb, and blind kid could sure make a mean meat ball.

Ugh. Really sorry about that. Still stuck in my head. 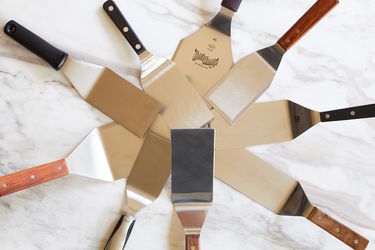