A little while back I asked the folks over on the Food Lab's Facebook page what their favorite dips were. Amongst the top answers: cheeseburger dip. Apparently, that's a thing.

I'd never heard of it, so did a bit of research and discovered that apparently all it is is Velveeta, a can of Ro*Tel tomatoes, and cooked ground beef. This presented me with several problems.

a) I'm not a big fan of Velveeta. 2) I can't get Ro*Tel tomatoes 'round here. d) Despite a) and 2) Cheeseburger Dip sounds awesome.

So here's what I did.

Working on my previous findings from my post on Cheese Sauce, I decided to build my Cheeseburger Dip base around cheese melted in a bit of evaporated milk with a dash of cornstarch to thicken it. Since this is a dip and not a sauce, I cut back on the proportion of milk and cornstarch to cheese.

While straight up cheddar works, I preferred the texture and milder flavor of a mix of sharp cheddar along with some American cheese from the deli, which is far more flavorful than singles (and is also close enough to real cheese to be labeled as such!).

If you've never had Ro*Tel, it's because they only sell them in a few states, and none of 'em are yours (or mine). Essentially, they're tomatoes cooked down with roasted chilies and a few other flavorings. Somewhat salsa-like in flavor, but with a more distinct green chili hit.

Now if there's one thing I ain't, it's fancy. I only wear ties to weddings and the occasional funeral, and I've got a strict no-closed-toe-shoes-outside-the-kitchen-until-December policy that my wife desperately wishes me to change, as it conflicts with my equally strict must-live-in-a-place-where-it-starts-snowing-in-November practice. Being not-fancy also provided me with a completely different sort of conundrum here: Do I do the unheard of and introduce a fancy home-cooked element into a from-a-can dip, or just buy the real stuff online?

In the end I decided that ordering specialty food products from the internet is a hell of a lot fancier than holding a pepper over a burner without even using a pan, so I jumped the ship and did it. It's really easy if you've got a gas burner, and only mildly more difficult if you don't (just do it under the broiler instead). The smoky, charred flavor of a fresh roasted poblano pepper is better than Ro*Tel any day in my book. Adding a bit of cumin and red pepper flakes to the beef rounds out the Tex-Mex Ro*Tel flavor.

I made a few batches of this stuff during testing and promptly brought all of it into the office the next day. It's dangerous to keep around the house. I think my wife described it best: "It's so gross, but it's so AWESOME."

Click the link up top for the full recipe. 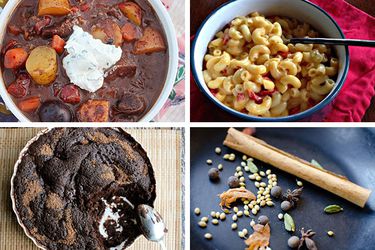 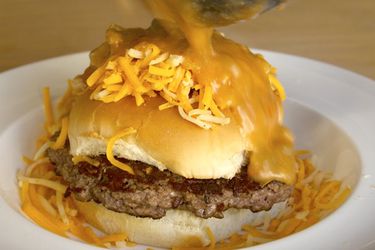