So yeah, the Big Mac is an undeniable American icon, inextricably tied with our image, but that doesn't make it a good thing—after all, so are poor foreign policy and the Kardashians, right?

That said, in concept, the McDonald's Big Mac is a pretty beautiful thing. I mean, who could really say no to two all-beef patties, special sauce, lettuce, cheese, pickles, and onions, all on a sesame seed bun? And there are certain things the clown does very well—the proportions, for example. There's just the right amount of beef to cheese to sauce to onion. Even the triple-layered bun, which may look overwhelming, is made of sweet, squishy bread that melts down into practically nothing as you bite into it, neither overwhelming not getting lost in the other flavors.

But just like many great ideas squandered before they fulfill their destiny, it's in the execution that things start to go awry. Luckily, execution is precisely where you Serious Eaters can make things right. The goal this week is to build a better Big Mac by taking that great concept and fixing up everything that's wrong with it. There's certainly no shortage of Big Mac clones on the internet, but, in my humble opinion, every single one I've seen misses the boat, opting for larger patties or other such "improvements" that only really serve to throw off the proportions of a perfectly conceived sandwich.

The first step was to take a close look at the original sandwich to determine exactly what needs improving.

With analysis complete, I moved on, tackling one element at a time.

The Big Mac sauce has been a closely guarded secret recipe for many years. At least, that's what many on the internet will have you believe. And if you are to believe those same people, then cloning Big Mac Sauce is as simple as combining Mayonnaise (or Miracle Whip!) with ketchup, pickle relish, and a few other flavorings, making the sauce essentially a Thousand Island-type spread.

Problem is, even a cursory bit of research on the Mcdonald's website reveals that the sauce is actually nothing of the sort. Rather, it is a mayonnaise-based sauce with no ketchup or tomato to speak of consisting of:

It's a frightening-looking list, but it's not really as bad as it seems. Calcium chloride is used to keep pickles crunchy (you'll find it in your canned tomatoes), xanthan gum and propylene glycol alginate are both thickeners derived from corn and kelp, respectively. Potassium sorbate and sodium benzoate are preservatives (we'll do without them), while disodium EDTA prevents metallic ions from reacting and affecting flavor during long-term storage (we also won't be needing that).

"Essentially, it's a mix of mayonnaise, relish, and mustard"

When you look at what's left, you've basically got soybean oil, pickle relish, vinegar, egg yolks, sugars (including HFCS), onion, mustard, vegetable protein, colorings, and emulsifiers. Essentially, it's a mix of mayonnaise, relish, and mustard with sugar, onion, turmeric colorings, and a bit of hydrolyzed vegetable protein thrown in. It's this last bit that might throw you for a bit of a loop.

Hydrolyzed vegetable protein is made by breaking down proteins into their constituent amino acids, resulting in a product with a distinctly savory flavor. Indeed, it's very similar to bottled yeast extracts (which are made by autolyzing yeast) such as Marmite, Vegemite, or Maggi seasoning. Any of those will do.

For the onions, rather than using powdered or dehydrated onions, I found that I got better flavor out of simply grating fresh onion on a Microplane grater. Combining this with the remaining elements and fiddling with the ratios got me a sauce that taste-wise was almost identical to the Mac sauce, though it lacked the characteristic pinkish hue, no doubt from the caramel color. No worries—I could live with yellowish sauce.

As for the thickeners, I also gave them a miss. My theory is that McDonald's only thickens their sauce so much in order to make sure it doesn't drip onto Drive-thru customer's laps on the freeway. I, on the other hand, like my burgers like I don't like my ice-cream cones: drippy.

The key characteristic when it comes to the Big Mac bun is the center "Club" layer, consisting of a single circular piece of bread with crumb exposed on both sides. Simple enough. All you've got to do is use a very sharp knife to cut the very bottom off of the bottom half of a regular bun. Though Martin's Potato Rolls won our burger bun tasting, Sunbeam or Wonderbread seemed the natural choice for these burgers because of their diminutive size and ultra-squishy nature (I went with Wonder because my local supermarket doesn't carry Sunbeam).

Problem is, neither of these brands have sesame seeds, which means that to get seeded buns, I'd have to self-apply.

Interestingly enough, if you start typing "How many sesame seeds..." into a Google search bar, the very first suggested autocomplete is "...on a Big Mac bun," and according to Answers.com, it's about 178. Now I may not have the very best vision in the world, but I call BS on this. Glancing at my bun, I'd guess there are at least twice as many.

I did some very quick calculations via the standard bacterial colony plate-count approximation technique: Just divide the circular plate into quadrants (or 1/8ths in this case), count the seeds in that section, and multiply. 75 seeds on 1/8th of the bun, which means that a Big Mac bun has actually got closer to 600 seeds on it.

Moral of the story: Never ever trust random sources on the internet to relay vital pieces of information.

To apply the seeds to the bun, I used a very simple egg white wash, applying it sparingly with my finger tip (a brush left too thick a coating, resulting in an inappropriately glossy bun top), after which I carefully applied precisely 600 untoasted sesame seeds with a pair of fine tweezers.* A quick 30 seconds under the broiler and my seeds were fixed.

This may or may not be true

My initial reaction was to simply replace the dehydrated-rehydrated onions with fresh ones, but it didn't quite work out. The flavor was simply too pungent and not at all right for the Big Mac. Sautéed onions weren't quite right either. You see, when onions are dehydrated, a lot of the volatile, sulfurous compounds that give them their pungency get evaporated, so what you're left with is onion pieces that exhibit mostly sweetness, with a very faint, underlying onioniness.

100 percent dehydrated-then-rehydrated onions are pretty lacking in flavor and texture, but what if I were to just dehydrate my own onions partially in order to concentrate their flavor and cut down on some of their pungency?

I placed a paper towel-lined plate of minced onions in the microwave and zapped them on low power for 10 minutes in order to drive off their moisture. The result was onions with a distinct sweetness and just a touch of the sharp pungency of fresh onions. Perfect.

Here's where we can really improve matters. McDonald's may use 100 percent beef, but it's pretty awful stuff with an odd, mash-like texture. We're much better off starting with fresh meat and grinding it ourselves. While most of my burgers get the Blue Label Burger Blend, this time I opted for 100 percent straight-up short rib, figuring that the sharpness of the pickles and sauce would cut through the otherwise overwhelmingly beefy and rich ribs.

Obviously, no additional fat was necessary, due to the insanely high amount of marbling in these ribs.

McDonald's Big Mac patties are the same patties used on the regular hamburgers, known in McD's lingo as "10 to 1's"—that's ten patties per pound of beef, or 1.6 ounces per patty. The amount of beef may seem tiny (even two patties is less than a single quarter-pound Shake Shack patty, for instance), but after trying to increase the amount of beef, I found that any more, and the sandwich's flavor balance went way out of whack. Don't get me wrong—a bigger burger can certainly be delicious, but it loses its essential Big Macness when the beef overwhelms the other ingredients.

McDonald's uses a proprietary double-sided griddle to cook both sides of their burgers simultaneously. The cooked patties are then held in a temperature and vapor-controlled warming drawer until your sandwich gets assembled. This is clearly sub-optimal.

Much better is to sear the thin patties over insanely high heat in order to build up a substantially browned crust. With 1.6 ounce patties, there's no way to expect a medium-rare center, but with beef this heavily marbled, even well-done meat stays plenty juicy.

"We're not trying to build a fancy-pants Big Mac"

You could go all fancy-pants and use "real" cheddar cheese, but that'd be missing the point. We're not trying to build a fancy-pants Big Mac, just a better one, and there's really no way to improve upon the glories of good, well-seared, well-seasoned beef and perfectly melted, gooey American cheese. The one improvement we make here is to actually melt the cheese on top of the patty as it cooks rather than placing a cold slice on top of cold lettuce and pickles like the Clown does it.

My only guess as to why they perform this logic-defying move is that it's an artifact of the assembly-line style construction process at the store.

As for bun placement and stacking, toasting is essential, and I'm in 100 percent agreement with their decision to place the sauce, onions, lettuce (ours is freshly shredded), and pickles (I use four chips instead of their two) underneath the patties. Not only does it protect the buns from burger juices, it also keeps everything crisp and fresh longer, allowing the hot beefy steam from the patties to be absorbed by the buns instead of by the lettuce.

The final result is a sandwich that's truly worthy of the title of American Icon. Two all-beef patties diminutive in size but massive with flavor potential. A special sauce that need not hide behind an of artificially colored mask with no problems dripping out wherever it wants to go. Fresh, crisp lettuce shredded just before serving. American cheese melted to its gloriously gooey fullest. Sharp pickles. Onions carefully guided to tame their pungency and bring out their natural sweetness. All on a soft triple-decker sesame seed bun made with precisely the right number of seeds.

If this isn't the American dream, then I don't know what is.

Your move, clown. Your move. 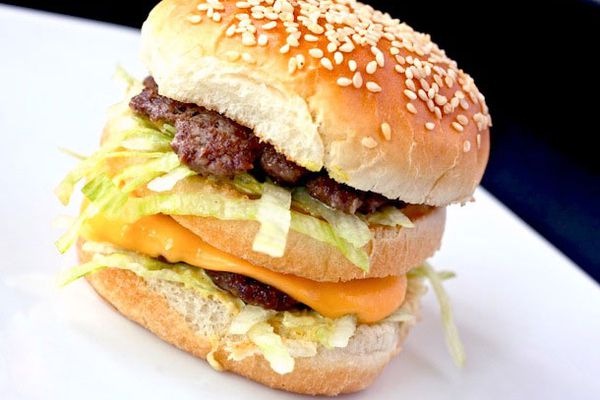 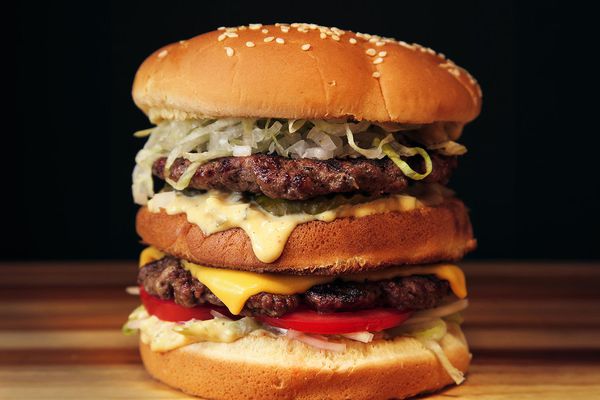 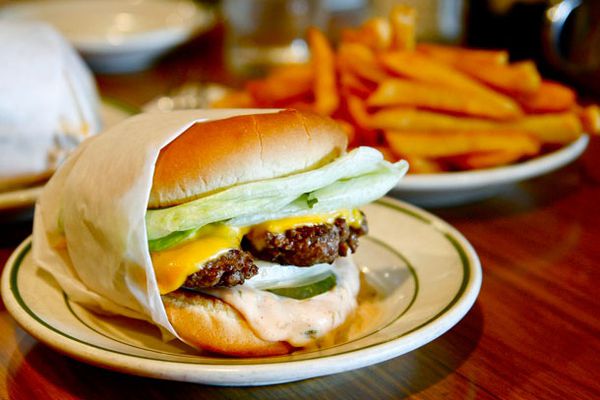