Cover turkey, mashed potatoes, and all your other sides in this glossy, balanced gravy.

Why shouldn't you buy pre-made gravy? The short and simple answer can be found in our powdered gravy taste test. Powdered gravy mixes just don't taste right. Sure, some of them have that nostalgic, cafeteria sort of appeal, but unless you're seriously trying to relive middle school, you're much better off making your own. With a few store-bought staples, it's surprisingly easy, and immensely better than anything you'll get out of a packet.

Here are three ways to do it, in increasing order of flavor and complexity, though even the most complex is still quite simple. All of these gravies can be made in advance.

The Easiest Way: Reach for the Umami Bombs

In an ideal world, if you have the time and inclination, the best way to make your gravy is to make your own stock, by browning the chopped carcass and neck of your turkey and simmering it with lots of vegetables. But a good-quality, low-sodium store-bought chicken stock makes a flavorful base that's far better than jarred gravy. Use it in this basic turkey gravy, which is essentially just stock thickened with a bit of flour and butter, and then add a touch of umami-rich ingredients like soy sauce and Marmite.

These might seem like odd choices to include in gravy, but when used judiciously, they can seriously increase flavor, adding depth and savoriness. A quarter teaspoon of Marmite and a teaspoon of soy sauce for every quart of gravy is about the right amount.

If you're going the store-bought-stock route, try simmering it down with some roughly chopped mirepoix (onions, carrots, and celery), a couple of bay leaves, peppercorns, and some fresh herbs, like thyme or parsley stems. You'll be amazed at the depth of flavor it picks up with just a quick, 30-minute simmer, especially if you brown those vegetables first, as we call for in this all-purpose gravy.

And, of course, there's nothing stopping you from also adding umami bombs to it.

The Hardest-but-Still-Really-Easy-and-Much-Better-Way: Add Turkey and Drippings

Your turkey gives off plenty of flavorful liquids and solids while it's roasting. Look at the bottom of the pan when the turkey is done—see the browned bits in there? That's called fond, and it's an instant gravy-enhancer. While your turkey is resting, place your roasting pan over a burner and pour in some stock. Scrape up the browned bits with a wooden spoon, strain, and use this enhanced stock as the base for your gravy. Even if you make your gravy in advance, you can always give it a boost at the last minute by deglazing the pan with a little stock and whisking it into your gravy just before serving.

While you're at it, through in the turkey neck and gizzards that came with the bird to the stock as it simmers. This'll boost turkey flavor even more.

Thicken Your Gravy the Right Way

No matter how you make your gravy, you want to make sure to thicken it the right way so that it comes out smooth and clean-tasting, without any gloppiness or starchiness.

There are two keys to this process. First is the ratio of flour and butter to liquid. I like to go with two teaspoons to one tablespoon of butter, plus one tablespoon of flour, per cup of liquid, letting it cook down a little bit to thicken. So, for a quart of stock, I melt three tablespoons of butter over medium heat, then vigorously whisk in a quarter cup of flour and cook the mixture until it's pale golden brown to remove any uncooked-flour flavor.

The second key is adding stock slowly. Dump it all in at once and that flour mixture can clump, resulting in gloppy sauce. Basic rule of thumb: The harder you whisk and the slower you add the stock, the smoother your gravy will be. Once you've added all the liquid, bring it up to a boil, reduce it to a simmer, and let it cook down until it gets to the right consistency, seasoning it only at the end with salt and pepper. (Seasoning too early can result in the salt concentrating and becoming too strong.)

Make Your Gravy in Advance

Any of these gravies can be made up to five days ahead. Get your turkey ahead of time and you'll even have a neck and giblets to work with. For Thanksgiving week, make your gravy on Monday or Tuesday, refrigerate it, then don't even think about it until Turkey Day. It'll reheat well in a small saucepan, or just in the microwave—stir it every 30 seconds while microwaving to make sure it doesn't explode.

In the mood for something a little less traditional? Try this porcini mushroom gravy, made with dried mushrooms and heavy cream, or this other rich and creamy version flavored with fresh herbs. For a lighter, brighter take, try spiking your gravy with apple cider. And if you want to get extra fancy, go for this red wine and shallot gravy. Any one of them will work wonders on your turkey and mashed potatoes.

How to Make the Best Simple Turkey Gravy

You can store gravy in an airtight container in the refrigerator for up to five days. In most cases, it will reheat nicely, either in the microwave (make sure to stir every 30 seconds to one minute to heat it evenly and prevent a skin from forming) or in a saucepan over very gentle heat (stir or whisk often). If anything does go wrong, just remember that lumps can be strained or blended out, and an overly thick gravy can be thinned with a little stock or water. An overly thin one, conversely, can be thickened by simmering briefly with a little extra cornstarch slurry. 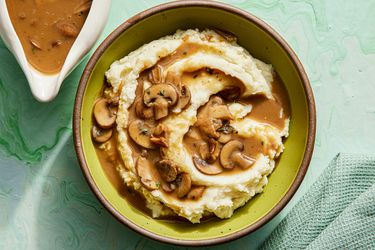 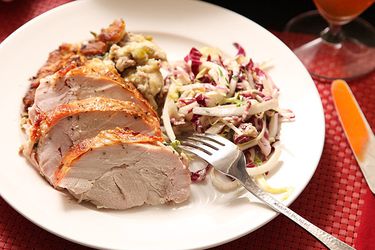