We're wrapping up San Francisco Mission Sandwich Week with the best of the rest.

The sandwiches in this list are the odds and ends that were tasty and memorable enough to earn a place in my notebook and camera roll, but didn't fall neatly into my Grilled Cheese, Mexican, or San Franciso-style Sub categories. What we've got here is a mix of fancy, simple, wacky, and otherwise plain delicious options.

When ranking these sandwiches, I first and foremost always looked towards harmony between the ingredients and balance of flavor, taking into account their eatability (do they fit in my mouth? Do they fall apart?), and quality of ingredients.

Here are today's winners, and make sure you stay tuned for Monday when I'll be naming the one and only King of San Francisco Mission Sandwiches, along with my ten favorites across all categories, and a slideshow of every sandwich I tried for this roundup.

When I last wrote about Pal's Takeaway, it was still located in the back of Tony's Market, a liquor store past on the Eastern edge of the Mission on 24th and Hampshire. Since then, owner Jeff Mason has moved to more permanent, larger digs at La Movida wine bar on 24th and Treat. New space, same Jeff, same sandwiches.

Well, at least as same as the sandwiches ever were, which is not very same—the menu changes daily depending on what Jeff finds at the market and sources from his friends. As I said before, more than anything, Jeff's a curator. He seems to have a particular knack for finding truly delicious things, be they meat, vegetable, or bread, and sticking them together. Proudly emblazoned on the top of their menu is Jeff's slogan: "Always vigilant in the search to find some more good fucking stuff to put between two pieces of bread for you."

The best thing I tried this time around? Thick slices of Dave's smoked brisket (I'm not sure who Dave is, but he has a way with brisket) served with a spicy and herbaceous slaw, some blistered cherry tomato relish, and some hot and bitter greens with a bit of homemade Russian dressing hiding in there as well. He puts it all neatly on a Firebrand roll and hands it to you for $10.

That's an exchange I'd make any day, but like I said, you're unlikely to find the exact same combination again. Whatever Jeff gives you, you're in good hands.

The Best Runner Up #1: The BLT Zarella From Pal's Takeaway

Ok, am I allowed to do this? The second best sandwich I had in the Wacky/Fancy Pants/Other category was also from Pal's. The BLT Zarella ($10) changes up occasionally, but it's always got some form of tomato (in this case breaded and fried green tomatoes), great chewy-crisp bacon, heirloom lettuces, and a spicy mayo. It used to be made with Tabasco. These days he's switched over to Sriracha—just enough of it to get some heat in there, but not so much that its overpowering garlickiness takes over. This guy comes stacked on toasted bread made by Josey Baker, one of the finest young bakers in town

Club sandwiches are stacked tall—there's no denying that, but some sandwich makers seem to think that fact gives them free reign to accessorize all they want, transforming lunch into a teetering tower of ego and hubris that tumbles and falls apart as soon as you make it past the obligatory toothpick.

At Clare's Deli, they understand perfection in concept and execute it flawlessly. Their 500 Club ($8) stacks bacon, turkey, ham, cheese, lettuce tomato, mustard, mayo, and three slices of bread with the precision and restraint of a Frank Lloyd Wright building, in perfect harmony with its surroundings and with your mouth.

I'm not sure what that metaphor really means, but here's the point: This is as good a club sandwich as you can hope for, and it comes with free all-you-can-drink Kool-Aid. Drink the Kool-Aid.

The Best Runner Up #3: The Fidel From Bi-Rite Market

Three runners up you ask? Yes, the sandwiches I had were all just that good, and I certainly couldn't leave out the Fidel ($8.99) from Bi-Rite Market. The hipster is strong with this one, but man, so is the flavor. Heritage pork shoulder braised until it's pulled-pork tender, served on a toasted Acme roll with a garlicky, lemony mayonnaise, dijon mustard, carrot and red cabbage cole slaw, and pickled jalapeños.

The Best Salumi: The Saucisson Sec From Craftsman And Wolves

Craftsman and Wolves only has two sandwiches on the menu. The very worthy Sloppy Joe ($10) is the brash lead singer who probably gets all the groupies, but if you're smart, you'll order the Saucisson Sec ($7). It's the kind of simple sandwich that defies logic. There's nothing special about sliced salami, chopped cornichons, and mustard on a baguette, is there? There is when every single one of those components is of the highest quality.

The French dry-cured sausage is sliced thin and the baguette is chewy—this is a sandwich made for small, pensive bites, dainty and demure in stature but not in flavor.

The Best Salumi Runner Up: The Salumi From Salumeria

Salumeria sure gets talked up a lot, and its semi-outdoor patio is a gorgeous place to take in a sandwich or two, especially in the mid-afternoon when the crowds have dispersed and the sun is still out. And while their salumi is quite tasty and their focaccia is delicious (especially when it soaks in juices from the pepper relish and pickled onions), the sandwich ($11) had one fatal flaw that kept it from the #1 spot in this category: the salumi was sliced so thick and the bread so tender that with my first bite the entire stack of meat was yanked out, turning what was a sandwich into a very tasty salumi platter with bread on the side.

The Best Egg Salad: The Devil's Egg From Mission Picnic

A great egg salad sandwich takes care and precision. The eggs need to be cooked just right—no sulfurous yolks or rubbery whites, please!—and they need to be bound with just enough mayo to season them, but not so much that they turn runny or overly loose. Mission Picnic does it right with their Devil's Egg ($8), which comes with crisp bacon on a brioche bun that's just soft enough to ensure that the egg salad doesn't all squeeze out as you bite your way through it. What's that melted provolone doing in a cold sandwich? It's a genius move designed to keep the egg salad from squishing into the bread. Nobody likes squishy egg salad-y brioche.

Another second prize winner for Salumiera, whose egg salad ($9) wasn't quite as rich and creamy as Mission Picnic's and whose flavor was dominated by just a bit too much dill. Still, the moist, grainy bread it came on earned it some points back—whole grain bread and egg salad are a natural pairing.

Giordano Bros. shamelessly cribs their sandwiches from the Primanti Bros. chain out of Pittsburgh—they even say it right there on their menu, but that doesn't make them any less awesome. For a mere $6.75 you can get a full meal between two slices of thick-sliced white bread, filled with Italian cold cuts and melted provolone cheese, a handful of hot fries, and another handful of vinegary, peppery cole slaw (everything on the sandwich is served by the handful).

Wise Sons Deli has several locations around the city, and they show no signs of slowing. That's mainly because their hand-carved pastrami and corned beef are so damn good. By New York standards you may find the pastrami to be a little too smoky, bordering somewhat closer to a Montreal style, but it still makes one heck of a Reuben ($13.75). The only reason they didn't receive a first place win on this list? That toasted double-baked rye bread could have used just a little more color on it.

See all of our San Francisco Sandwich Week coverage here! 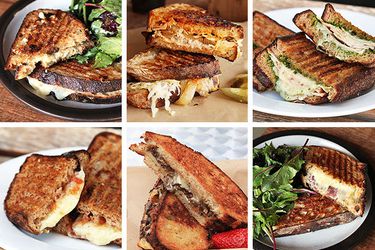 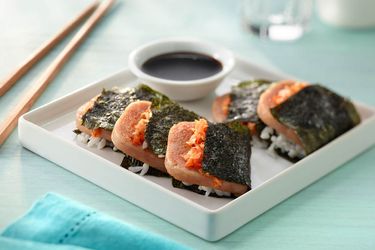