These mashed sweet potatoes are seasoned simply with maple syrup and butter, and can be made ahead of time and reheated when you're ready to serve.

The Science of Sweet: Converting Starches Into Sugars

Sweet potatoes, like a few other starchy tubers and gourds, have a secret hero superpower locked within them. By unlocking that superpower, you can actually make a sweet potato taste sweeter without adding any extra sugar to it. I've talked through some of this science in the past, in an article about the best roasted sweet potatoes, but it's worth a recap, as it all applies here as well:


As Harold McGee writes in On Food and Cooking:


You see where we're going here? By holding a sweet potato in that, ahem, sweet spot between 135 and 170°F (57 and 77°C) for an extended period of time, you can actually induce it to naturally convert its starches into sugars.

If you've got yourself a good sous vide rig, then the process here is simple: Throw your whole sweet potatoes directly into a 145°F water bath, let them rest for a few hours, then roast and mash them. If you're hell-bent on the absolute best sweet potatoes and don't have a sous vide circulator, you can easily use the beer cooler method. Just fill a cooler with water at around 170°F, add your sweet potatoes whole, put the lid on, and let them sit for a couple of hours before packing them in foil pouches and roasting for the recipe. But I wanted a method that would take advantage of this phenomenon without the need for any fancy equipment. I turned to the oven instead.

Sweet potatoes can be made even sweeter by pretreating them in a water bath to activate their enzymes. To do this with a sous vide–style circulator, set your circulator for 150°F (66°C). Place the sweet potatoes in the water bath and let circulate for 2 to 4 hours before proceeding with the recipe. To do this with a beer cooler, fill your cooler with water at 170 to 175°F (77 to 79°C). Add the potatoes, cover, and let rest for 2 to 4 hours before proceeding.

To Make Ahead: Sweet potatoes can be refrigerated for up to 5 days. To store and reheat, transfer the sweet potatoes to a heavy-duty zipper-lock bag with the air pressed out. Reheat by completely submerging the zipper-lock bag in a pot full of hot (not boiling) water, removing the bag occasionally to squeeze contents around, until fully reheated, about 30 minutes. The best way to do this is with a sous vide–style circulator set at 150°F. 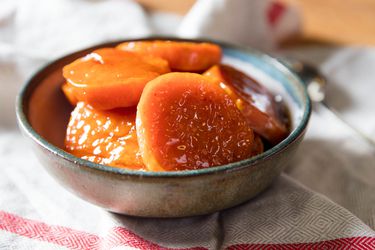