Cast a spell on melted chocolate so that it hardens into candy on your scoop.

Now what if you want the Magic Shell concept but with a bolder, darker, better-tasting chocolate flavor? Or what if you want to make your own ice cream bars? You're in luck, because this stuff is easier to make at home than the ice cream you drizzle it on.

Look around the web and you'll find no shortage of recipes that promise a perfect Magic Shell substitute with just two ingredients: chocolate and coconut oil. Over the past few weeks I've tried my share—those that call for as little as a tablespoon of coconut oil or as much as a cup. To be honest, most of them don't work very well.

For one thing, and you can call it splitting hairs if you like, I'd describe these DIY ice cream toppings as chocolate dip, not Magic Shell. As those of us from New York know, chocolate dip is the shellack that hardens into a thin coating on your Mr. Softee cone. It's a little softer than Magic Shell, fudgier, and less snappy compared to Magic Shell's candy-like bite. There's more chocolate flavor and less sweetness—something that I actually prefer to Magic Shell.

The bigger issue I found with other recipes is the wrong proportion of coconut oil to chocolate, which produces either a shell that doesn't harden or one that turns brittle and oily-tasting. This recipe nails that ratio, and while it doesn't harden quite as fast or snappy as Magic Shell, it comes with chocolate dip's deeper fudge-y flavor. And once you have this one recipe down you can use it for an ice cream truck's worth of novelties: King Cones, Klondike Bars, you name it.

The 'Magic' in the Shell

Both chocolate dip and Magic Shell get their magic instant-hardening ability from oils like coconut and sunflower that are high in saturated fat. As temperature drops, saturated fats harden, and coconut oil, in particular, turns firm, almost glassy, when cold. What's more, it doesn't take much to turn coconut oil solid—it can firm up at room temperature and turn rock-solid in the fridge.

When you emulsify coconut oil with melted chocolate, the mixture remains a stable liquid at room temperature. But as soon as you drizzle it over ice cream it chills down fast, and within 30 seconds it hardens into a snappy shell.

The food scientists at Smucker's have put a lot of hard work into making their Magic Shell especially snappy and fast-freezing. Let's give them credit for that, because every homemade version I've tested takes longer to harden—about 30 seconds instead of five. But the guiding principle is the same: Magic Shell and chocolate dip are all about saturated fat. And the best fat for your chocolate dip is fast-hardening coconut oil.

How to Make Chocolate Dip

Coconut oil is our magic ingredient, and the more of it you use, the snappier and faster-freezing your chocolate dip will become. Stick to refined coconut oil (it's often labeled as "for high heat") instead of unrefined or virgin; refined coconut oil has a more neutral, chocolate-friendly flavor.

The best reason to make your own chocolate dip is to use higher-quality chocolate. Dark chocolate's flavor holds up best to all that coconut oil, and it makes for a snappier coating compared to milk chocolate. For a sweeter dip, go with a chocolate in the 65% range; for some bitterness, a 72% bar is perfect.

Since the chocolate's sweetness gets a little lost with all that oil, I add some sugar in the form of corn syrup. Why not plain table sugar? Because sugar won't dissolve in chocolate and oil alone; it'll remain coarse and gritty. Corn syrup, on the other hand, emulsifies seamlessly into the dip, and it adds some fudge-like body as a bonus.

Chop your chocolate finely to ensure fast, even melting, then stir it together with the corn syrup and coconut oil in a microwave-safe bowl. I nuke my chocolate in small doses—15 seconds on half power—stirring with a spoon in between. Three or four zaps should be enough to completely melt the chocolate. Don't have a microwave? A metal bowl set over a pot of simmering water works just as well.

And that's it: You have chocolate dip. If you heat your chocolate too quickly it might break, forming harmless but unsightly brown speckles in your dip. To re-emulsify the dip, blend it at high speed for 30 seconds and the spots should disappear.

Looking to replicate the Magic Shell squeeze bottle experience? A plastic one can be yours for 50 cents at a restaurant supply store. If you're planning to dip whole scoops of ice cream instead, keep your dip in a tall, narrow container to get maximum dip coverage. Either way there's no need to refrigerate your dip, which will keep for months at room temperature. Just give it a quick stir before using because the ingredients will separate over time, and if it's been a while since your last chocolate dipping, warm up the dip in a microwave to melt any solidified coconut oil crystals.

For best results, let your dip harden on ice cream for 30 seconds before digging in. You'll know it's ready when the surface turns from glossy to completely matte and a light tap with a spoon gives you a knocking sound.

After that, all that's left to do is make enough ice cream bars to put the Good Humor truck out of business.

Store your chocolate dip at room temperature. It keeps for several months but will separate over time, so stir or shake before each use, or briefly warm up in a hot water bath or microwave until all ingredients re-combine. 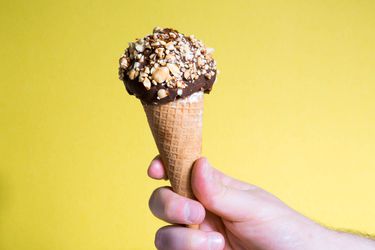 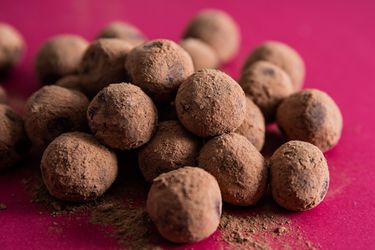 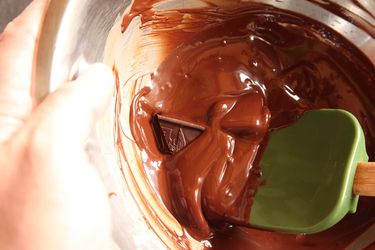 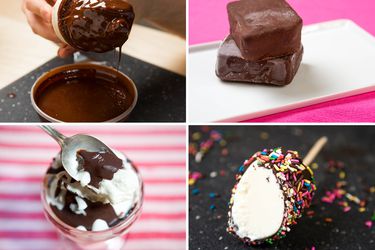 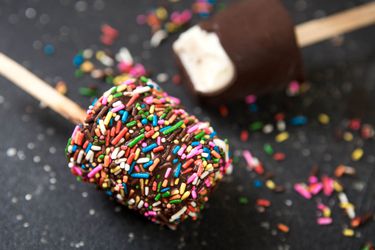 Cooking With Coconut Oil: Sweet and Savory Recipes We Love