Stick with plain, unsulphured molasses. If you don't live in a part of the country where it's locally made, grocery store brands like Grandma's or Brer Rabbit will do in a pinch. Otherwise, hop online and buy a jar of sorghum instead. It's a similar product, made from a grass of the same name, with a bright, almost orangey flavor to balance the darker notes of caramel and malt. Sorghum's an artifact of my upbringing in Kentucky, a personal preference rather than any sort of make-or-break secret ingredient. That distinction goes to whole wheat flour.

It provides the same depth of flavor we love in graham crackers, but it's also both hyper-absorbent and lousy at forming gluten. Those two factors make the dough thick but weak, so it spreads less and cracks more, for gingersnaps that bake up invitingly thick yet tender. Plus, it bakes to a chestnut hue that puts white flour to shame.

Due to its unique pH and sodium content, blackstrap molasses will give these cookies a cakey texture and slightly bitter edge. If you can't get a hold of molasses, reach for Lyle's Golden Syrup instead.

Portion dough onto a cutting board wrapped with plastic, cover lightly, and chill until firm; about 30 minutes. Divide between a few heavy-duty zipper-lock bags, and refrigerate up to 1 week (freeze 2 months). Bring to room temperature, roughly 70°F (21°C), then roll, coat in sugar, and bake as directed. 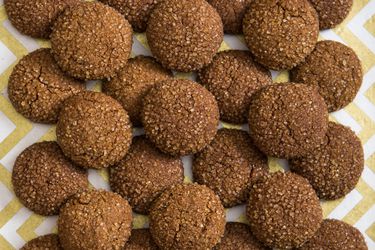