DIY takeout from your own kitchen.

My high school physics teacher, Mr. Harless, always said to me, "Kenji, your goal in life should be to work hard to become as lazy as you can be."

During my first semester at college, when all classes were taken on a pass/fail basis, I took him at his word by being the one student in my thermodynamics class who got the lowest possible passing grade. I'm pretty sure that's not what Mr. Harless meant.

What he did mean was this: If you take the time to solve one problem, you should do your darnedest to make sure that the lessons you learn while solving it are applied to other, similar problems so that you can kill multiple birds with one stone...in an engineering sense.

Prime example: Take all the lessons I learned during months of testing recipes for General Tso's chicken and apply them to its very similar partners-in-crime on the Chinese-American lunch special menu, orange chicken and sesame chicken.

Easily the most difficult part of making General Tso's chicken at home is the battering and frying process. After dozens of tests, I landed on a method that works flawlessly to produce the crispest, most sauce-clingingest chicken you can imagine by using a combination of an egg-based batter and a vodka-spiked marinade to coat the chicken chunks before frying.

With a coat that crisp, the chicken stays crunchy no matter what you throw it into, and lucky for us, the only real difference between orange chicken, sesame chicken, and General Tso's happens to be the easiest part: the sauce. Adapting the recipe was as simple as coming up with good sauce replacements.

True Chinese-style orange chicken is made with sliced fresh chicken—not the battered and fried stuff you'll find in the US—and is flavored not with fresh orange, but with dried orange or tangerine peel. It's been ages since I've seen this version served at a restaurant in the US, but that's okay by me—the fried version does just fine.

Most of my testing for this sauce revolved around packing in the right orange flavor. I started by drying out orange peels naturally in the sun, then used them to flavor the sauce. It was tasty, but lacked the brightness I was after (not to mention it took over a day to dry the peels properly).

Drying the orange peels in the oven sped up the process, but didn't do much for flavor. What about fresh peels?

They were certainly brighter in flavor, but lacked the intense, almost raisin-like depth of dried peels.

The key turned out to be a threefold combination: I used dried strips of orange peel along with some fresh-grated orange zest, and a good amount of fresh juice in the sauce as well.

I made the sauce by sautéing some ginger, garlic, and scallions, then deglazing the pan with Chinese rice wine, just a touch of soy sauce, some fresh orange juice, some vinegar, sugar, and salt.

A little cornstarch thickens it up to chicken-coating texture.

And if you're the kind who likes their orange chicken a little spicy, a touch of red chile or even sriracha wouldn't hurt here.

Oh, and hey Mr. Harless, look what I did: I can now get take out-style Chinese-American orange chicken and I don't even have to pick up the phone! How's that for lazy?

For the Dry Coating:

Shaoxing wine can be found in most Asian markets. If unavailable, dry sherry can be used in its place.

If you can't find boneless skinless chicken thighs, you can debone them yourself using this guide.

Dried orange peel can be found at Chinese grocers, or make your own by peeling off sections of orange peel with a vegetable peeler and placing on a wire rack set in a rimmed baking sheet in a 275°F (135°C) oven until mostly dry, about 45 minutes. 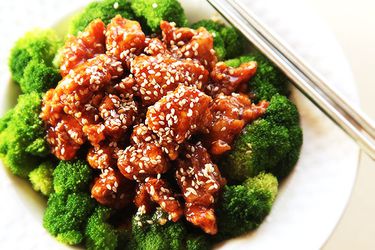 The Food Lab Redux: How to Make Orange and Sesame Chicken at Home 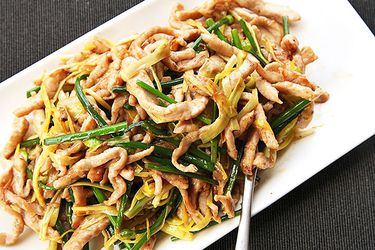 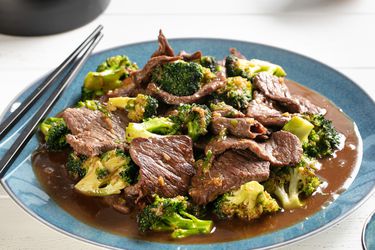 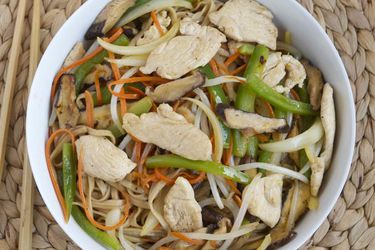