J. Kenji López-Alt
Culinary Consultant
Kenji is the former culinary director for Serious Eats and a current culinary consultant for the site. He is also a New York Times food columnist and the author of The Food Lab: Better Home Cooking Through Science.
Learn about Serious Eats' Editorial Process
(19)
0
In This Recipe

The first time I had a taste of truly excellent excellent baba ganoush—the Middle Eastern dip of roasted eggplant mixed with olive oil, sesame tahini, garlic, and lemon juice—it was made by a good friend of mine, an Israeli line cook who'd take time out of her afternoon to hover over the eggplants as they slowly charred over the open flames of the kitchen's burners. She'd wait until they were meltingly tender before recruiting me to carefully peel them, and then she'd mix them up with lemon juice, tahini, garlic, and olive oil. The resulting dip was simultaneously smoky, savory, bright, and creamy.

Like many great dishes, baba ganoush is extraordinarily simple in concept: Roast some eggplants; scrape out the flesh; mix it with some garlic, lemon, tahini, and olive oil; and serve. It's in the details where things get a little more complicated.

Choosing and Cooking the Eggplant

First things first: the type of eggplant. Big ol' globes are usually the eggplant of choice, but I find that smaller Italian eggplants tend to be more intensely flavored, have fewer seeds, and are smaller, and therefore quicker to cook, to boot.

When cooking the eggplant, one of our primary goals is developing some nice smoky flavor. This comes from the charring of the skin and requires the intense radiation of a broiler or a direct flame. If you've got an outdoor grill, that's your best bet; you want to carefully turn the eggplant directly on the flame until it is soft and charred. Otherwise, a broiler will do.

If there's one thing you should know about making baba ganoush, it's this: Cook your eggplants until they're done, then cook them some more. Your eggplants should be deeply charred and completely tender, collapsing at the slightest touch and giving no resistance when poked with a toothpick or knife. When you lift them from their stem caps with a pair of tongs, they should hang completely limp, like deflated hot-air balloons. A good rule of thumb? Cook them until you think they're burnt beyond saving, and that's when you're good to go.

Next step: drainage. In Yotam Ottolenghi's Plenty, he suggests transferring the scooped eggplant flesh to a fine-mesh strainer to drain off excess liquid. This is a good idea—the dip I made with drained eggplant flesh had a much better, creamier texture than the version made with undrained flesh—but it's time-consuming, taking up to an hour for the eggplant to drain completely. Could I hasten the process?

I tried squeezing the eggplant in cheesecloth and pressing it through my fine-mesh strainer with a ladle. Both methods work, but they're a bit messy. Instead, I reached for my salad spinner, placed the fat chunks of eggplant flesh around its perimeter, then took them for a gentle spin and watched as the brown, watery juices flowed out of them. I was left with eggplant as dry and concentrated in flavor as if I'd let it rest in a strainer for a full hour, in just about 30 seconds.

With our eggplant cooked and packed with intense, smoky flavor, we're now in the home stretch. Baba ganoush is a simple dip, and there are really only four more essential flavoring elements: garlic, tahini, lemon juice, and olive oil. How we add them is what's important.

The garlic and lemon juice—both largely water-based additives—are easy: Just stir them right in. I go with a whole clove of garlic and about a tablespoon of lemon juice per eggplant, which is higher than what most recipes call for, but I like my baba ganoush bright and hot. (Feel free to start with less and add more to taste.)

The tahini and olive oil, on the other hand, are fat-based additives. What does this mean for our dip? Well, as we all know, fat and water don't play together very nicely. Dump your tahini and olive oil directly into the eggplant and stir it in, and your dip ends up with a greasy aftertaste. Some recipes overcome this effect with the use of power tools: A food processor will quite easily get that oil to emulsify with the liquid, resulting in a smooth, hummus-like texture.

But I like my baba ganoush to have some more textural interest to it, with tender chunks and strips of eggplant bound together in a creamy dip. How do you get that?

The best way I know of is a method another old friend, Paula, learned from her Lebanese mother-in-law: pretend you're making mayonnaise. After all, on a microscopic level, baba ganoush and mayonnaise are not all that different; both are oil-in-water emulsions. The key to a smooth, stable emulsion is to slowly introduce the oil. I start by whipping up my eggplant, garlic, and lemon juice with a fork as if I were scrambling eggs, breaking down the eggplant into a rough paste.

Next, I add the tahini and whip it in vigorously until it's incorporated. Finally, I slowly drizzle in olive oil (and plenty of it—a third of a cup for my three eggplants), whisking hard the whole time.

The result is a baba ganoush that's lighter, creamier, and more intense than any other I've had, with a savory, smoky aroma, bright acidity, a hint of garlicky heat, and plenty of good olive oil flavor. (You did remember to use your best olive oil, right?)

Click Play to Learn How to Make the Best Baba Ganoush

The baba ganoush can be made ahead of time and stored in an airtight container in the refrigerator for up to four days. Let it come back to room temperature before serving. 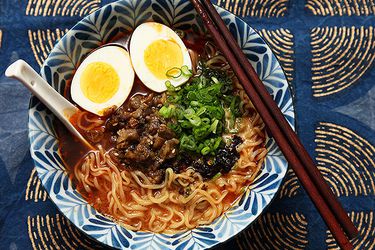 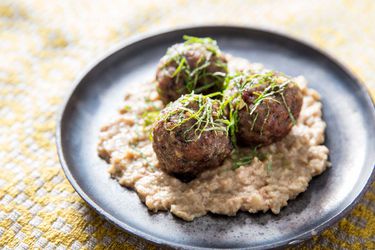