Melanie Haupt
Melanie Haupt earned her PhD in English at the University of Texas at Austin; her dissertation focused on women's food writing. In addition to her academic work, she is a freelance writer focusing on food criticism, up-and-coming dining culture, and historic Texas foodways.
Learn about Serious Eats' Editorial Process

"Chicken-fried steak is a dish that's about taking something that's less than palatable, in this case a tough piece of beef, and with a little ingenuity turning it into something delectable," says Lisa Fain, the author of the Homesick Texan. "This perseverance, creativity, and positive attitude completely embraces the spirit of Texas and the Texan way of doing things." In fact, chicken-fried steak is so damn Texan, it has its own day, mandated by no more august body than the Texas State House of Representatives.

"Did you ever eat chicken-fried steak when you were growing up?" I recently asked my Arizona born-and-raised husband, thinking that folks who weren't brought up in Texas or Oklahoma may not be familiar with the dish. He scoffed. "Of course I did. It's not like it's the state dish of Texas or anything."

While he's technically correct—the reach of chicken-fried steak reach extends beyond the Texas state lines—he was missing the point. Chicken-fried steak tells the story of Texas. The dish shows us how a particular global diaspora changed Texas foodways for good, and it brings us back to a time when so-called "country cooking" was just ... cooking.

If you've lived up to this point never having consumed chicken-fried steak, well, that's just not living. Start with the basics: chicken-fried steak is steak, breaded and fried like you would chicken. Purists will argue that you can't use just any beef in chicken-fried steak; traditionally, the cut was tough and cheap—usually round steak—although many cooks and restaurants use higher-end cuts like ribeye or tenderloin these days. After the cook pounds out a piece of round steak with a mallet (or runs it through a tenderizer), she dredges it in seasoned flour, dips it in egg wash, then dredges it in flour again. This process ensures a seal that traps the heat inside the breading and cooks the meat while keeping it tender. The steak is then fried, either in a cast iron skillet or a deep fryer. The golden brown and crunchy result is then slathered in cream gravy, which is made from pan drippings (or bacon grease), flour, milk, and pepper. The final product is a wonderful combination of salt and umami, showcasing the rich creaminess of a well-executed gravy.

According to Robb Walsh in his 2012 encyclopedia of regional Texas cuisine, Texas Eats: The New Lone Star Heritage Cookbook, there are three styles of chicken-fried steak in the Lone Star State. The first is the schnitzel-adjacent Central Texas version; East Texas interpretations skew more stereotypically "Southern," with a thicker, richer breading; West Texan cooks specialize in cowboy-style pan-fried steak, which is coated in flour—skip the eggs—and seared in a skillet. This latter style hearkens back to the 19th century cattle-drive days, when Texan ranchers were sending their herds out West, chasing gold rush money first in California and later in Colorado, as well as supplying cattle to frontier outposts in West Texas and New Mexico, which may account for why the first print instance of chicken-fried steak appears in the Colorado Springs Gazette in June 1914.

While it's nearly impossible to definitively trace the origins of chicken-fried steak in Texas and beyond, the most commonly accepted history of the dish traces a line back to a wave of German immigration to Texas that began in the 1830s. Thousands of people—primarily middle-class farmers and artisans from west-central Germany—arrived seeking opportunities in Texas' wide-open spaces. By the turn of the 20th century, more than 40,000 Germans populated a long stretch of Texas countryside known today as the "German belt," from their point of arrival in the port city of Galveston in the southeastern part of the state to Kerrville, located in the west-central hills.

The Germans brought with them an Austrian dish called wiener schnitzel: a butterflied veal (or sometimes pork) cutlet pounded thin, dipped in eggs and bread crumbs, then deep fried until golden brown. The resulting coating, sometimes referred to as a "carpet of crumbs," is similar to that of chicken-fried steak, but the schnitzel is only dipped once in flour rather than twice, so the coating is a bit thinner and crispier. German settlers likely found that veal and pork were a bit thin on the ground, but that beef was in abundance, especially during the Civil War. During the war, Texas supplied the Confederacy with beef, which led to a steep rise in the cattle population. As such, the switch to cheap cuts of beef in the preparation of wiener schnitzel likely occurred sometime in the mid-19th century.

Despite the fact that over the generations, more and more people flocked from the Hill Country and beyond to the urban areas of Dallas, Austin, Houston, and San Antonio, Texas remains a largely rural state with a sizable population working in agriculture. As such, chicken-fried steak is closely associated with Grandma's scratch cooking in the Texan imagination, although it's safe to say that few people cook chicken-fried steak at home these days. "It's one of those peasant foods that brings you back to the roots," says Jack Gilmore, the boisterous chef behind Jack Allen's Kitchen, a farm-to-table restaurant on the outskirts of Austin. "Every mom and grandma living in the South had bacon drippings in a coffee can on the stove, in between the burners. So you take a cut of meat, pound it out, flour, salt and pepper, cast iron skillet, put some fat in there, and boom."

"That's why grandma was tough," Gilmore laughs. "She used to beat her meat every night."

Says Hoover Alexander, owner of Hoover's Cooking in Austin, "I think chicken-fried steak fits into what I call 'po-folks culture,' using what's available to you to make something nice." Chicken-fried steak has been a menu staple in Texas (and beyond) since the rise of restaurant culture in the 1950s; if you're looking to find the best chicken-fried steak at a restaurant, the prevailing wisdom says you should count the number of pickup trucks in the parking lot (the more the better).

But you can't just take a steak and beat the hell out of it and expect your chicken-fried steak to come out right. Kim Pierce, writing in The Oxford Companion to American Food and Drink, cites instructions from The Kentucky Housewife (1839) for the home cook to beat the tough cuts "tender, but do not break them or beat them into rags." It's about finding that sweet spot between too-tough-to-masticate and mushy-enough-for-invalids-and-babies before sending it to the fryer.

While the (correctly prepared) meat is the star of the show, some may argue that the sides make the dish—I like a big mound of mashed potatoes and something green, usually green beans or broccoli (or if I'm at Threadgill's in Austin, broccoli-rice casserole liberally doused with hot sauce). Some people drop the artifice of nutrition and get mashed potatoes and macaroni and cheese with their steaks, while others will split the difference and order fried okra.

But for most folks, the deal-breaker is the gravy. "There were several restaurants who were known for their chicken-fried steak but they cheated and used a gravy mix," says Alexander. "I could always tell the difference. You need that little burst of freshly cracked black pepper." Indeed, it's easy to spot a cream-gravy impostor; mix-based gravy almost always tastes pasty, where scratch-made gravy wears its rendered-fat authenticity like a badge.

While you can't really fiddle too much with a dish as iconic as chicken-fried steak, there is some wiggle room for interpretation. At Jack Allen's Kitchen, Gilmore and his team seek to elevate the peasant dish by using New York strip in place of the round steak, but it's the smoky, green-chile-spiked cream gravy redolent of bacon drippings that really sets this variation apart. Hoover's uses cuts that have proven to be "fork tender," meaning they've responded well to judicious tenderizing before being breaded, fried, and topped with a peppery, umami-rich cream gravy made with bacon fat and chicken stock. Hill's Cafe in Austin breads its legendary chicken-fried steak with a cracker-type meal and tops it with a chicken-stock-based "yella gravy."

Beyond Austin's borders, chicken-fried steak negotiates a similar tension between traditional renditions and contemporary attempts to 'elevate' the rustic dish. Folks wait patiently for hours on end—and with good reason—at Sodolak's Beefmasters in Bryan, where the under-$10 chicken-fried steak is nearly as big as the pickup trucks in the parking lot. Meanwhile, in Houston's tony River Oaks neighborhood, Frank's Americana Revival offers up a gut-busting whopper of a chicken-fried steak that will set you back $22 (which probably helps subsidize the cost of the valet service at lunchtime.) Norma's Cafe, an old-school diner in Dallas' humble-yet-gentrifying Oak Cliff neighborhood holds the line amid a burgeoning population of trendy new restaurants with its award-winning chicken-fried steak. But the bottom line is, unless you're eating a pre-pounded frozen cutlet, you'd be hard-pressed to find a bad chicken-fried steak, which is why it has achieved iconic status across generations.

Regardless of whether it's your Oma or a hidden line cook making your chicken-fried steak, in Texas, every instance is an interaction with a complex story of the globalization of people and food. Everything else is gravy. 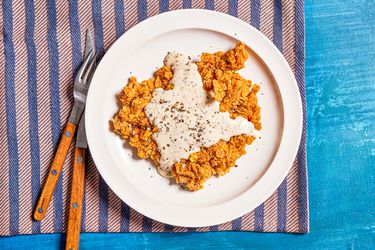