If tasting 'regular' frozen pizza requires reduced expectations, then tasting frozen 'cheeze' pizzas might be termed an exercise in complete and utter futility. As Kenji has already argued quite convincingly, vegans and/or the lactose intolerant are probably far better off forgoing the cheese factor altogether when it comes to pizza. And, if this experience has taught us anything, he is unequivocally correct—at least when it comes to the realm of frozen pies. There's just no way around it...great vegan melting cheese simply does not exist. (Yet!)

So, let's cut to the chase. What's the point?

Optimism is definitely part of it. But if we're being honest, it mostly boils down to the curiosity factor. Was it possible there could actually be something to this burgeoning trend?

Neither vegan nor lactose intolerant myself (and a total cheese nerd), I'll readily admit that I'd never really given "dairy-free vegan cheese alternatives" much thought one way or another. In fact, I'd dismissed them so thoroughly that when I recently passed the glowing shrine of frozen, soy substitute-topped pies at my local Whole Foods, I did a completely genuine double-take.

It went a little like this: First, an incredulous Wait, this exists? Then, cowering slightly (and not not convinced that I was surrounded by an army of self-righteous vegan telepaths), a rushed Well, yes, of course this exists. Followed by the haughtier, Gross, this exists, and finally, eyes bulging and mind racing a mile a minute, to an Aha! THIS EXISTS! By which point I realized I was already at the cash register, handing over my credit card and watching the cashier bag my prize of four (four!) cheese-ish pizzas.

Of course, that was the easy part. Then we had to, well, eat them all.

*The Amy's pizza is not strictly vegan, since it contains caseinate, a milk-derived protein, in the soy cheese. They do have vegan versions of the pie, but none were available at the time of our visit. For this reason, we have focused on the "cheeze" factor, rather than the vegan component.

With such limited experience in these matters, we had a hard time even determining our criteria until we'd completed our tasting. At the end of the day, our "winning" pie was less about the how well the cheeze worked—my initial expectation—and far more about how efficiently the other factors could make the cheeze element as inoffensive as possible. Because, shocker, vegan cheese alternatives are, at their very very best, flavorless and minimally applied.

The Cheeze: We were hoping for cheese alternative that would (a) melt relatively well and (b) taste somewhat milky, salty, and, er, cheese-like.

The Crust: Okay. It's frozen pizza. We weren't looking for any miracles, just a crust that would get some nice crispness to the base and at least a little flavor. Add a slightly fluffy, bready texture and airy density and we'd be pretty darn pleased.

The Sauce: A decent sauce under these circumstances should have a good balance of acidity, with enough seasoning to add body to the pie. We were also on the lookout for typical offenses, like cloying sweetness, over-seasoning, or that one-dimensional tomato pasty flavor and texture.

This pie was definitely the best of the bunch, owing entirely to the quality of the crust. It actually had some rise and texture to it, though we thought that the whole thing was in need of some serious seasoning.

It was definitely alarming how different our pie looked from the image on the box—I actually had to pull it out of the oven prematurely to avoid burning it to a crisp, and at no point did the cheese show even the slightest inclination to melt. It was ultimately really crunchy and had almost no flavor at all. So either that box is pure lies, or someone needs to revisit their cooking directions.

We had high hopes for American Flatbread's vegan pie. It uses real tomato sauce and Daiya vegan mozzarella shreds, sprinkled with parsley and herbs. And parts of it were actually pretty decent. As in, there was a sliver of decent crust, okay-tasting sauce, and soft, stringy cheeze with some actual seasoning to it. But they were sandwiching a thick, profoundly unappealing goopy layer that tasted a whole lot like Elmer's Glue. (Don't ask how we all jumped to that reference without hesitation...we're still not sure).

Oh, also, it was our second favorite. Or third least-favorite?

Woah, Nelly! The sauce on this guy was out of control. Laid on way too thick, it was also super sweet and insanely over-seasoned with oregano. Which isn't surprising considering that its only ingredients are tomato paste, water, garlic, canola oil, salt, oregano, and basil. The Daiya cheese melted relatively well on this guy, but still retained its shred shape. Soft little flavorless confetti, if you will. At least the sauce and cheeze detracted from the freezer burny, gummy "crust."

Everybody else was pretty grossed out by this pie. But what the hell—it was my favorite. Probably because it seemed so far outside the realm of pizza. It had an overwhelming fake butter flavor to it, with a super crisp, thin crust. Sort of like a cracker soaked in grease, which is apparently something I'm into. But unless that's you're thing, you should listen to my colleagues and steer clear.

I had hoped we might experience something of a revelation with this taste test, providing vegans and lactose intolerants with some glimmer of a future of frozen pizza possibilities. But, alas, we are forced to conclude that there is, quite simply, no such thing as a good "cheeze" pizza. 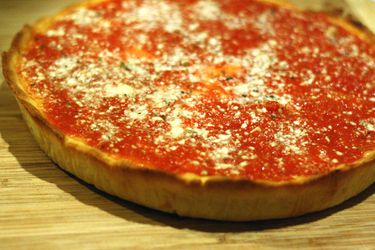 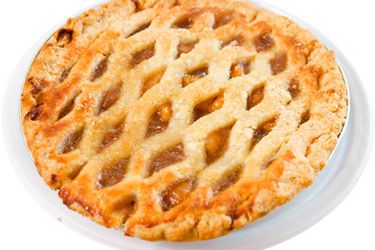 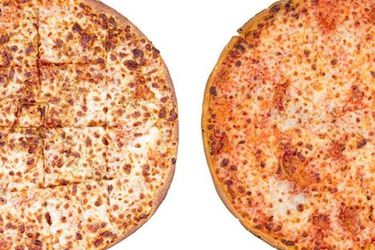 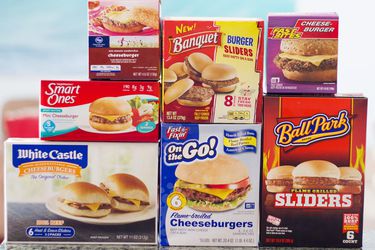 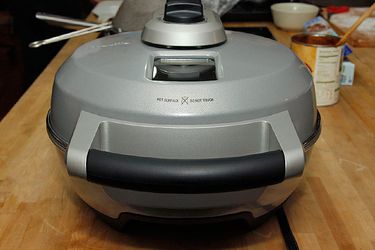