Sriracha taste test? What are you talking about? Is there even more than one brand of sriracha?

Yes, indeed there is.

As condiments go, sriracha is one of the great American success stories. Until David Tran, the 68-year-old Vietnamese immigrant who founded Huy Fong Foods, started marketing his familiar green-capped, rooster-emblazoned version of the Thai hot sauce (named after the coastal city of Si Racha), it was virtually unknown in the United States. Now, you'd be hard pressed to find a supermarket that doesn't stock it or a hipster restaurant that doesn't employ it in one dish or another.

Its allure is undeniable. It's more than just a simple hot sauce of fresh chiles—it has a light sweetness, a distinct vinegariness, and a bracing jolt of garlic.

But there are two sides to the story. Some folks (myself included) find that the Huy Fong version—the one that is almost synonymous with sriracha*—is geared toward the palates of American chile-heads who prize heat above all else, rather than the more balanced sweet-hot-sour balance that the Thai original goes for. Pok Pok chef Andy Ricker is a famous detractor of the stuff, preferring Shark brand, a more traditional made-in-Thailand version.

How would our panel of tasters feel? Would we go for a thicker, spicier, bolder American version, or would our palates lead us to a thinner, sweeter, more vinegary Thai sauce?

We gathered together nine different brands and a panel of 16 tasters to find out. Apparently it's not hard to find volunteers for a Sriracha taste test.

Our search for srirachas brought us four brands from Thailand and five from the U.S.:

We asked our intrepid tasters to rank sweetness, heat, and overall flavor on scales of 1 to 10, and requested detailed comments on flavor, texture, and any other salient facts.

In order to combat palate fatigue, tasters were asked to taste the srirachas in randomized sequences so that no two individuals would try the sauces in the same order. In addition, dumplings were provided for dipping, and fried rice and sparkling water were offered as a palate cleansers between brands.

I had some early theories going into this. Perhaps the thicker srirachas would fare better than the thin ones. Nope. No correlation there at all. Ok, maybe it's the ones with perservatives and thickeners vs. those without. Wrong again! In fact, after the rankings we found that numbers 1, 3, 5, 7, and 9 all had thickeners and/or preservatives, while all of the even numbers were preservative- and thickener-free.

A small Thai brand that actually seems more like a knockoff of Huy Fong than a true Thai sauce, Polar was the second spiciest of the sauces we tasted, with a vinegary heat that reminded some tasters of Tabasco sauce. It was praised more for its fresh, bright flavor than for any deeper, more fermented notes that some tasters liked in other brands.

We'd be happy stocking our pantry with this guy, who's available off of Amazon. 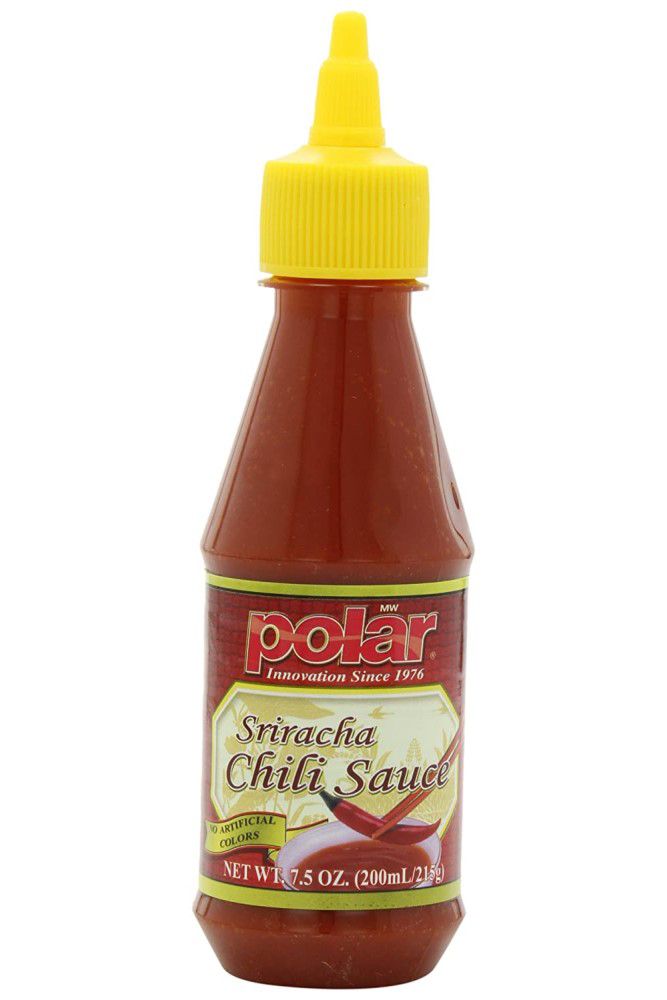 Andy Ricker's sauce of choice and one of the more authentic Thai options, Shark is noticeably thinner than most other brands, with a distinct sweetness that helps to balance out its not-immodest heat. It has a "nice fresh aroma" that reminded tasters of "real chiles."

Some tasters found it too watery, saying "this would be a better coating, not a dip." 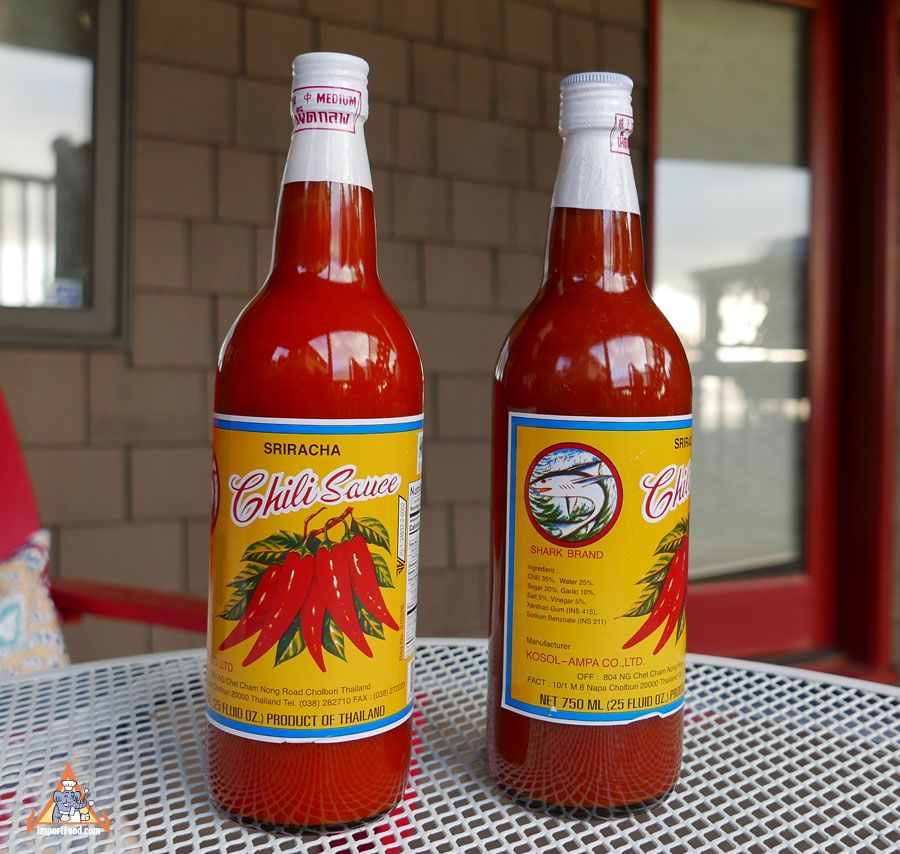 The familiar rooster sauce came in at a strong third, with tasters saying "sweet at the beginning, then hot at the end," and "tangy, sort of like puréed sambal oelek," or simply "fantastic!"

Other tasters weren't quite as happy, claiming it had a "musty and hot weird flavor," or that "the preserved garlic flavor is strong with this one." 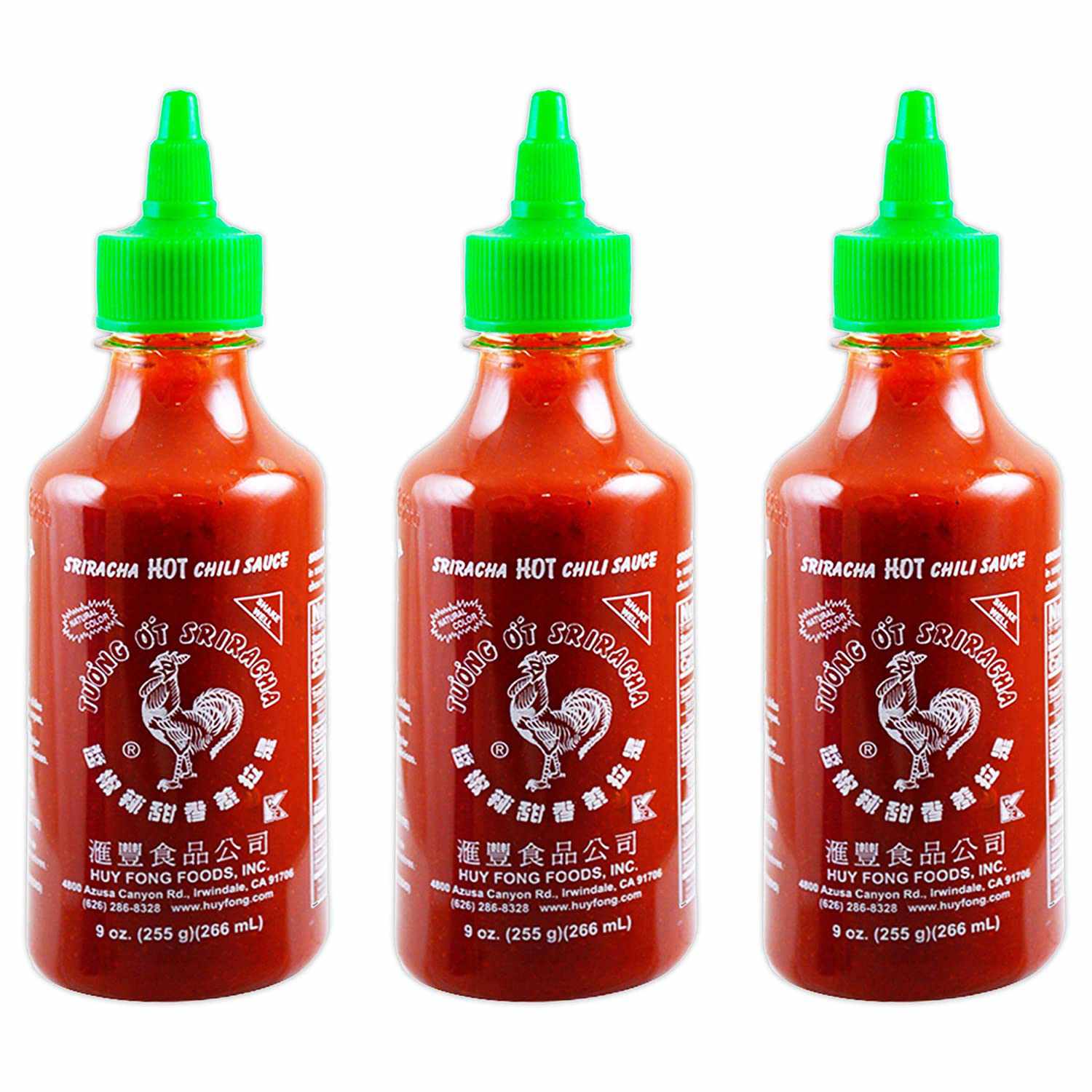 The sole exception to our spicier-is-better rule, Kikkoman beat out all the other sauces in terms of heat ranking, yet it only came in fourth, largely due to what many tasters called "off" or "preserved" flavors. "Nice heat, but yuck," about sums it up.

The most out-there brand in terms of flavors (it includes fish extract!), it also had the grittiest, chunkiest texture. Some tasters liked that is "seems less industrial than the others," though others found that there are "strange flavors here, for no apparent reason."

In other words, it was a good sauce, one that we generally liked, but it tasted nothing like any sriracha we'd ever had before.

Trader Joe's Huy Fong knockoff has a moderate amount of heat, not too much vinegar, and a slightly watery texture. Tasters were completely divided on flavor. Some claimed it had "decent chile flavor," while another said, "incredibly disgusting old chili rancid nasty a$$ s&%t." Now there's a dichotomy.

One thing is certain: the flavor is strong, and you'll either hate it or find it mildly tolerable.

Thai Kitchen is one of the more widely available made-in-Thailand brand of sauces available in the U.S., and while this sauce wasn't specifically named sriracha, it's clearly meant to be, based on its ingredients list and flavor.

Unfortunately, their definition of "spicy" didn't exactly coincide with ours. Thick and gloppy with a cloyingly sweet flavor, some folks likened it to spicy duck sauce, or said it was "more like sweet and sour sauce." Yet it wasn't as good as either of those other sauces, either.

One of the most popular brands in Thailand, it had barely any heat at all, instead coming off as sweet and syrupy, with not enough actual chile flavor, and way too much garlic for our tastes. "Is this one made from nature?" said one taster, while another said, "whoah, off jarred-garlic flavor."

Our loser had a near fluorescent red color that turned off many tasters (it's the only brand with artificial coloring in it). "Very sweet and not much aroma or flavor," and "color is wrong, as is the flavor," were common complaints. We didn't find much redeeming about this jar.