Let's cut the crap. I'm not here to provoke an argument or debate the merits of whether deep dish even deserves to be categorized as pizza. I'm just trying to deal with a Chicago winter that has brought two polar vortexes and over five feet of snow. And you know the worst part? IT'S ONLY THE MIDDLE OF FEBRUARY. And thanks to that furry rascal in Punxsutawney, we can safely expect the misery to continue for the time being.

I'm coping in the only way Chicagoans know how: with deep dish pizza. Seriously, what better way to survive the cold than to coat your insides with a big gooey blanket of cheese?

But while there is no shortage of delivery options available to me, I decided to focus on the options I could find in the freezer section of my local grocery store. Plus, I had a crazy thought: whether or not deep dish is your ultimate style of pizza (hint: it's not mine), shouldn't the sturdy and hearty pie withstand the freezing process better than a thin-crusted pie? In other words, shouldn't there be less of a difference between a fresh and a frozen deep dish than with almost any other kind of pizza?

This was hard. While I was able to pick up a number of options at Target and my local grocery store, Strack and Van Til, half of these were surprisingly difficult to track down. I had to swing by both Uno's and Lou Malnati's for frozen versions of their pizza. And while you can order most of these online, only a handful are available on Amazon.

You'll notice Home Run Inn is not included. Though I could find evidence that the company used to sell frozen deep dish pizza, I confirmed with the corporate office that Home Run Inn no longer does.

One last thing. As I mentioned above, I picked up a frozen deep dish from the original Pizzeria Uno in River North. Later I realized that Uno Chicago Grill—the corporation that owns that restaurant, Pizzeria Due, and all of the franchise locations—also sells a branded line of frozen deep dish pizzas. Though it also goes by the name Uno, I could tell from some online photos that it was its own thing, mostly because the cheese is placed on top of the sauce, but I couldn't figure out how to get my hands on one. You can order freshly made pizza on the company's website, but not frozen ones. I found this collection of retail products, but no list of where to buy them. Target apparently used to carry the product, but not any more. There is randomly one box of pepperoni available for on Amazon, but the price is wildly inflated. Perhaps you have to stop by one of the franchise locations, but there aren't any of those in the city of Chicago. I even called the corporate office three times to help clear this up, but could never get through. Oh well.

At first I decided to include a couple of stuffed pizzas in the roundup, but quickly realized that this deep dish variant is too different. Though it looks almost identical to deep dish, stuffed pizza has a thin layer of dough above the cheese and below the sauce, and the crust is both taller and flakier. The real kicker, however, is that frozen stuffed pizza is much fussier to prepare. While the frozen deep dish boxes had simple instructions like, "Cook in a 400F° oven for 25 minutes," both stuffed pizzas I tried had seven or eight different steps. Anyway, that explains why Giordano's is not included.

As I would for any pizza, I broke the scoring down to three important criteria: crust, cheese, and sauce. I realize that toppings are very important, but to keep the judging process as straightforward as possible, I went with the plain cheese option for each.

Crust: Each bite should be flavorful and crisp, not greasy and soggy. Plus, the base needs to remain structurally sound to deal with all the other toppings. No weaklings!
Sauce: The tomato should be fresh and vibrant, with a nice balance of sweetness and acidity. Chunks of tomatoes are appreciated. Some dried herbs are okay, but too many get in the way. Likewise, tomato paste can add body, but too much makes the sauce overly sweet.
Cheese: Cheese should melt evenly and be gooey, with a nice sour tang. Subpar cheese was chalky and crumbly, tasting mostly of salt.

The pizzas were judged solely by me over a three day period for my safety and sanity. Plus, each one called for a different oven temperature, making cooking them all at once impossible. But I also saved some leftovers from each pie, and when necessary, I was able to compare two different pies at room temperature. Fortunately, the results were pretty clear from the start. In general, name recognition matters. The offerings from well known deep dish pizzerias in Chicago outperformed the others in every category, though the difference was most noticeable in the cheese.

Crust: To my surprise, one of the thicker crusts was also the best. Each bite was crumbly, relatively light, and flavorful. More importantly, it wasn't greasy or gummy.
Sauce: The only slightly weak link. The sauce tasted too much like tomato paste, coming off as overly sweet. It was also thin, with not enough hunks of tomato.
Cheese: Gooey, melty, and just slightly tangy. Excellent stuff.
Overall: This is the one frozen deep dish pizza I'd want to have in my freezer to satisfying a craving.

You can pick up a frozen pizza at Pizzeria Uno and Pizzeria Due.

Crust: The crust is surprisingly not that thick, but it is very dense. It almost shatters when you bite through. Fortunately, it's not greasy, but it's not particularly flavorful, either.
Sauce: The best sauce by far. Nice hunks of tomatoes that actually taste like tomatoes. There's a pleasing acidity and tartness that had me going back for more. Really impressive.
Cheese: This is genuinely flavorful and tangy cheese. But there is way too much it. I know that's kind of the point of deep dish, but this crossed some threshold I didn't know existed, covering up even the great flavor of the sauce. Tone this sucker down and you have a winner.
Overall: This one was very close, and I genuinely loved the sauce. Perhaps it just needs some toppings to help deal with the incredible amount of cheese.

Crust: It's sturdy, that's for sure. But it's also dry around the edges and doughy elsewhere. Fortunately, it's not too heavy.
Sauce: Sort of chunky, and not too sweet. But it's also kind of watery, and there is a strong dried herb profile, which I didn't care for.
Cheese: The sheet of cheese melts admirably, though I wish it had a bit more personality. Know that it does not hold up well; once cool, it becomes chalky. Eat quickly!
Overall: Solid option. I was worried it was going to be a greasy mess, which it is not. This option also seems to be more readily available than Lou Malnati's or Uno's.

This product was purchased at Strack and Van Til. It is available at a number of other local grocery stores. Click here to order online.

Crust: Cracker-like and crumbly. In some respects, it's better than the larger Gino's. But the proportion is off. There's seems to be way more of the crust here, which ultimately is a negative.
Sauce: Once again, the chunks of tomato were appreciated, but it was overall a bit watery.
Cheese: Decent enough. Like its big brother, it lacks integrity, turning into a congealed, rubbery mass once cool.
Total Score: Almost as good as the full Gino's, but just a bit too bready.

This product was purchased at Strack and Van Til. It is available at a number of other local grocery stores. Click here to find the closest store to you.

Crust: Not offensive, but very bland.
Sauce: So, so sweet. Loads of dried herbs, too.
Cheese: Tastes like frozen pizza cheese, so at least you know what to expect. It's certainly flavorful, if a bit salty.
Overall: This tastes like the pizza you'd get at a sporting event. It's missing many of the key details of deep dish, but I can see how this would be satisfying in a pinch. 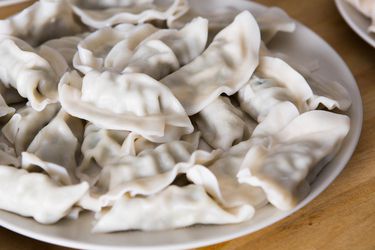