Lobsters will keep growing indefinitely over their potentially long lifetimes, but their hard shells don't. This is a bit of a problem for the lobster, so once a year, every adult lobster wiggles out of its old shell and forms a new shell that it puffs up with water into a larger size that it'll eventually grow into.

This molting season marks the beginning of the prized soft-shell lobster season in Maine, where 80% of the lobster in the U.S. comes from. Running from mid-June to November, it's the season of lobster rolls, drawn butter, and potato chips.

But are soft shell lobsters really better than hard shells? What's the actual cost of the meat you're paying for? What about labor costs? Here are the answers to all those questions.

Remember when you were a kid and your new clothes were always two sizes too big to give you room to grow into them? Lobsters do the exact same thing: A lobster's freshly formed shell will be significantly bigger than its body—that shell won't change size over the next year, so the lobster needs room to grow into it. Not only this, but in order to shed its old shell, a lobster will actually lose weight so that they can wiggle out.

So when you open up a new shell lobster, you may be surprised by the small amount of meat inside it compared to its overall size, whereas a hardshell lobster will be stuffed to the brim. You'll also notice that a new shell lobster will have a brighter red color—carotenoid pigments the flesh picks up from the shell get more concentrated as a ready-to-molt or just-molted lobster sheds water weight from its flesh.

You might think that because hard shell lobsters have so much meat in them, they're heavier for their size than new lobsters (that is, if you had a 1 pound hard shell and a 1 pound new shell, the hard shell would be smaller), but this is not the case. Most lobsters are weighed and priced just after fishing them out of the tank, before new shells have had a chance to shed their retained water weight. When buying new shell lobsters, a good deal of what you're paying for is water weight that will be lost during storage, cooking, and shucking.

So what are the actual yields on new versus hard shell lobsters, and how does that translate to cost? Yield of edible meat per pound of live lobster can vary a great deal over the course of the year and the lobster's life cycle, but we can give some good rough estimates.

*calculated assuming the best possible yield. Actual price per pound may be higher.

So you can see that the price for actual edible meat from a soft shell lobster is greater than for hard shell lobsters, though many lobstermen and fishmongers will price soft-shell lobsters at a lowered per-pound cost in order to help compensate for this.

Hard shell lobsters have more meat in them per pound, so if you are, say, serving a lobster salad that calls for 2 pounds of picked meat and you count your personal labor costs by the lobster, then you're better off using hard shells.

But this doesn't take into account one fact: soft shell lobsters are way, way easier to crack and pick.

A hard shell lobster requires specialized tools—a cracker, mallet, or back of a heavy knife, gloves for handling—and plenty of brute force. I've come across claws from large lobsters that are so hard to crack that even a regular hammer with several full-strength doesn't do the trick. Soft shell lobsters can often be shucked with no tools at all, or at the very most, a set of kitchen shears (this model from Kuhn Rikon is my favorite).

Personally, I'd rather shuck a dozen soft shell lobsters than a single hard shell lobster, the difference is so great.

So we've talked cost and labor. Now we get to the important bit: Flavor. None of that above matters one bit if one lobster is much tastier than the other, right?

I cooked six lobsters of the same (pre-draining) weight, three hard shell and three new (soft) shell. All lobsters were cooked via a combination of steaming and roasting to the same internal temperature (135°F) before being shucked and roughly chopped. Tasters were asked to taste multiple times from each sample so they got a variety of tail and claw meat.

In their overall rankings, tasters almost unanimously preferred the soft shell lobsters to the hard shell, citing its tenderness, sweetness, and lobster-y flavor as the primary factors. This makes sense—with less water weight in their deflated flesh, it's not only the red/orange pigments that get compounded, but flavorful molecules as well. That said, many people felt the hard shell lobsters had a bit more brininess to them, with some tasters commenting on their ocean-like aromas.

In the end, it comes down to personal preference. I vastly prefer soft shells for their easier shuck-ability and superior tenderness and flavor. For the flavor and convenience factors, I'm willing to pay the 20 to 30% premium on price per pound—smaller portions of better tasting food is never a bad thing in my book. But if absolute value is your yardstick and you don't mind putting in the grunt work of extracting hard shell meat, then you might prefer the way a hard shell's generous meatiness will overflow your butter-griddled top-split bun. 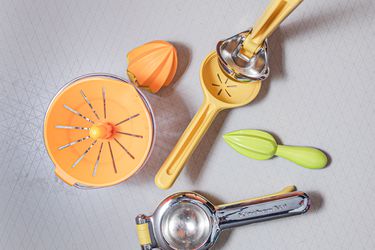