When we're in the mood for good grilled fish, meat, or chicken in a sweet and salty teriyaki-style sauce—well, we generally go ahead and make our own (it keeps forever—I have a constant supply in my fridge). But there are times when a bottled marinade is simply more convenient. Whose bottled teriyaki sauce is the best?

I started this taste test with high hopes—I love teriyaki of all sorts—but quickly realized that conducting a bottled teriyaki sauce tasting in the U.S. is not as easy as it seems. The problem is that the American concept of teriyaki sauce is quite different from the traditional Japanese version. As a result, there are two distinct classes of sauce on the market, both of which are labeled "teriyaki."

Traditional Japanese-style teriyaki is actually the name of the cooking technique, not the sauce. To make teriyaki, meat (usually fatty fish like hamachi, salmon, or mackerel in Japan, though chicken and beef are not uncommon) is grilled over hot coals or broiled while being brushed with a sweet soy glaze called tare. The sauce is applied a few times during cooking, and can also be applied at the very end before serving. At its simplest, tare is made with nothing more than soy sauce, mirin (sweet Japanese wine), sake, and sugar boiled down to a thick, syrupy consistency.

When cooked right, teriyaki gets a shiny, lacquered glaze (teri translates to "shiny," while yaki means "grilled"). The finest teriyaki houses in Japan will keep their sauce in a container that never gets changed or emptied—only topped off. There are restaurant that use sauce that has been replenished for decades, if not centuries.

American-style Teriyaki Sauce, on the other hand, is more of a catch-all term for various soy-based sweet-and-salty Asian sauces. It is more heavily flavored, usually containing ginger, garlic, sesame seeds or oil, and perhaps some citrus zest or juice. It's sold as either a marinade/sauce, or as a straight-up finishing/serving sauce for meats.

Most people prefer one style to the other and they can't exactly be substituted, so we decided to rate both separately for our recommendations.

We tasted sauces on their own and with ribeye steaks in a double-blind tasting. Sauces labeled as "marinades" were allowed to marinate for 1 hour before cooking. Sauces were ranked on sweetness, saltiness, and overall preference.

Japanese Style teriyaki sauce should be glossy and shiny with a clean flavor and a good balance of saltiness and sweetness. It should pack plenty of umami punch to bring out the flavor of the grilled meat it is being applied to.

American Style teriyaki sauce is more about a good balance of flavors, with neither the ginger, garlic, or sesame dominating the basic sweet and salty base.

Most of the store-bought sauces we tried were... pretty bad. Thin, harsh, and overly salty without enough sweetness to balance, most also contained vinegar (perhaps to make them seem brighter?), which was off-putting to some. Then again, when the homemade stuff is so simple (only four ingredients!), there's really no reason to buy a Japanese-style teriyaki sauce in a bottle.

We would not recommend any of the store-bought brands in this category.

"Nice sweet soy flavor," was the overall consensus for the homemade version. It was significantly thicker and glossier than any of the store-bought brands. Made with real sake and mirin, it was also the only sauce for which commenters noted pleasing wine-like flavors. The simple teriyaki recipe contains only four ingredients.

The simplest tasting of the store-bought sauces, it got higher marks for a balanced sweetness, though instead of real rice wine, the ingredients list boasted "alcohol" and "natural flavorings," which would explain some of its harshness.

Tabasco makes teriyaki sauce? Yes, yes they do. Their sauce was a fairly traditional sauce (again, not enough sweetness), but had a distinct peppery heat that some tasters enjoyed while others found distracting. Some noted a "weird, synthetic taste," though it did have an ingredient list that seemed closest to the Japanese classic.

"This just tastes like soy sauce," said more than one taster. Sweet and salty, but very little wine flavor. It was also extremely thin and sharp tasting. "HELLO SALT."

Overall the American-style brands fared much better, perhaps because they have enough other flavors to distract from the sometimes overt harshness of the thin Japanese-style brands. The winner is one we'd happily brush onto our steaks.

Soy sauce, sugar, and rice wine flavored with onion, garlic, and sesame seeds, this one had a nice, syrupy texture without being overly gloppy. "Tastes like what you'd get in a restaurant." "Not overly sweet or salty but balanced." Some tasters claimed it had "a little too much sesame," but overall we enjoyed it.

A huge amount of xanthan gum gave this sauce a texture that was more gloppy and mucus-like than truly syrupy, but the flavor was decent with a good amount of ginger, garlic, and sesame. "Sticky, with a sweet and salty balance," said one taster. "This one works well with steak," said another.

A brand started by a Jewish-Chinese couple back in 1984, this is a staple on New York grocery shelves (and in the homes of many Serious Eats staffers and interns). Extremely heavily seasoned with garlic, ginger, and sesame, it's also the only brand that contained oil in its makeup.

"Whoah, a lot going on," said one taster. Too many competing flavors gave the overall impression of something closer to Worcestershire than teriyaki sauce. Cider vinegar, honey, and plum juice all make an appearance on the list. It tastes fine on meat, "but not like teriyaki." 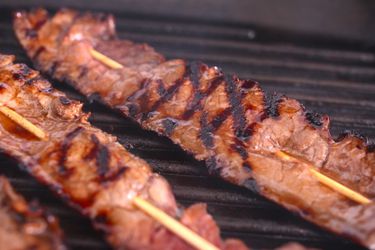