I didn't grow up eating the kinds of processed snacks that most American kids ate during the '90s. No Twinkies. No mini muffins. No Fruit by the Foot. No Dunkaroos. No fun. Thanks, Mom.

But my mom wasn't completely cold-hearted. Visits to our local Japanese or Chinese supermarket would sometimes result in the grand prize of a ten-pack box of Koala's March: "chocolate"-filled, vaguely koala-shaped, bite-sized cookies printed with one of a gabillion (ok, a few hundred) adorable koala characters. I loved the cute designs, the individually-sized packs that I didn't have to share, the bright green hexagonal box, and the combination of chocolate-flavored stuff and crisp, cookie shell.

But marketing goes a long way with kids. Because now that I'm old enough to look past the cute packaging (which I'd love even if it were filled with owl pellets), I've sadly realized that what's inside is kind of...not good. At least compared to the four other snacks I gathered for this taste test of Asian, chocolate-filled, bite-sized cookie snacks (aka all the Asian, chocolate-filled, bite-sized cookie snacks I could find in Manhattan's Chinatown; there are probably more out there).

I'm starting with Hello Panda because not only is it the oldest brand in this taste test, released by Meiji in Japan in 1979, it's also the clear winner. Most of the Serious Eats tasters chose this as their favorite due to its soft, creamy filling and crumbly, sweet Ritz Cracker/Milano-like cookie (either ball-shaped or panda head-shaped). The main complaint was that there wasn't enough filling compared to the amount of cookie.

Five years after Hello Panda came out, Lotte released Koala's March in 1984. Koala's March seems like a Hello Panda competitor, but it's pretty different (aside from also being part of the "chocolate-filled, cute animal-themed cookie" category). The Koala's March cookie is crisp, thin, and anemically pale, not crumbly and golden like Hello Panda's, and the filling is more solid and waxy instead of creamy. The most important difference? Koala's March was our least favorite cookie. Compared to all the others, it has the least flavor; both the cookie and the filling are bland.

Koala's March does get points for having the clearest printed graphics on the cookies and for having the most limited-edition flavors. I'm not too ashamed to admit that kind of marketing totally works on me. I mean, just look at these packages:

BUT THE PLOT THICKENS?: The first box of Koala's March I bought was a product of Thailand, which made me wonder if I could find one made in Japan. I almost gave up after visit to a nearby Japanese supermarket came up empty handed. But a visit to Yaya Tea Garden—which aside from being my favorite local lunch spot also offers a decent selection of packaged Asian snacks and sweets—resulted in a prized package with a sticker declaring "PRODUCT OF JAPAN."

At least, it was prized until I ate it. The Japanese version does taste mildly better than the Thai one—the chocolate is less waxy and a bit more flavorful—but not better than the rest of the cookies in the taste test.

Lotte's Kancho was released in 1984, the same year Lotte released Koala's March. (Although they're both made under the Lotte name, I'm under the impression that Kancho originated from Lotte South Korea, and Koala's March from Lotte Japan. Someone correct me if I'm wrong, though.) It's more similar to Hello Panda than Koala's March, but instead of pandas the round-shaped cookies feature two characters named Kany and Chony (...get it?) and items like a violin, chef's hat, glasses, hand mirror, and more. The cookie is a little less crumbly and more crisp than Hello Panda, and isn't as sweet. The filling is also less flavorful than Hello Panda. I like Hello Panda more, but some of the tasters chose this as their favorite of the five snacks.

As for why Lotte would name a snack the same thing as a Japanese prank where one attempts to stick their fingers in someone else's butt, I have no idea. According to friend/former Serious Eats intern Emily Koh, "kancho" has no meaning in Korean.

Pucca by Meiji is the most different snack in this taste test. It's another bite-sized, chocolate-filled, animal-themed snack, but instead of having a cookie-like shell its fish-shaped body is like a hollow, thin-walled pretzel nub. (I almost didn't include it in the taste test because it's not a cookie, but...it's close enough.) Its pretzel shell gives it a more hearty crunch than any of the other snacks, but it lacks the saltiness I wish it would have. Bland pretzel combined with bland filling makes for a disappointing (but at least texturally interesting) snack. Having said that, some tasters rated it well because they preferred this shell's texture over the others. 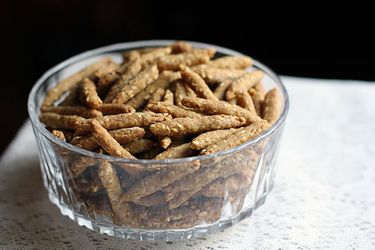