I wasn't an hour on the ground in Taipei before a pancake was shoved in my face and I was tearing into its oily belly, clumps of egg and chewy dough funneling down my throat. Nevermind that it was after midnight and I hadn't slept since leaving New York; the pancake was glorious—a flaky, laminated number with an omelette pressed against its greasy skin. A hidden squiggle of sticky-sweet brown sauce cut the fat smeared on my lips, and I fell asleep that night with Thai basil in my teeth.

"Travelers often fall into the trap of overdoing it at lunch or dinner and skipping breakfast the next day to recover. This would be a mistake in Taiwan."

Travelers often fall into the trap of overdoing it at lunch or dinner and skipping breakfast the next day to recover. This would be a mistake in Taiwan. So too few hours later it was time to set out for breakfast. We slept through the morning rush, but you don't want to tarry too much on visiting the King. While he's open 24 hours a day, there are six more meals to eat in Taipei after breakfast, and considering the carby payload of Taiwan's comfort food morning meal, any delay cuts dangerously into the rest of your eating schedule.

The King in question was Yonghe Dou Jiang Da Wang, or the Yonghe District soy milk king. Little breakfast shops and makeshift stands are everywhere in Taipei, and like the Famous Ray's pizza joints I grew up with, many take the title of Yonghe soy milk king for themselves. But the corner shop on Section 2 of Fuxing South Road—notably not in Yonghe District at all—is one of the most respected. It seemed like a fitting place to gorge on a meal that's frustratingly hard to find outside Taiwan and its expat communities, one that speaks not just to Taiwan's incredible food, but to its politically complicated cultural history.

While Taiwanese cuisine revels in local seafood and colorful produce, many of its comfort food breakfast staples are carby and monochromatic. There are foot-long scepters of fried dough (you tiao, literally "oil stick"), fluffy steamed buns, chewy-soft griddled turnip cakes, wide bowls of hot soy milk, and pancakes—so many kinds of pancakes.* Dishes tend toward savory rather than sweet and function brilliantly, like all the best breakfasts, as a hearty way to ground the rest of your day.

Taiwanese pancake madness may be matched only by South Asian cuisines, where roti, paratha, and naan are utensils as much as food. They're not just for breakfast or midnight snacks, either. Fujian and Chaozhou immigrants brought popiah to Taiwan; it's a thin, crêpe-like pancake that's then filled and wrapped like a burrito around meat and vegetables or, for dessert, shaved peanut brittle, ice cream, and cilantro.

In unskilled hands this meal is clumsy and bland. Do it right, though, and the you tiao crackle just so, the griddled shao bing pancakes sing with toasted sesame, and the soy milk is impeccably fresh and sweet with a touch of beany backbone.

Yonghe Dou Jiang Da Wang's soy milk (dou jiang) is indeed royally good; you can get it sweet and creamy or savory and coagulated, made by stirring vinegar into the milk so it curdles into proto-tofu clouds (tastier than it sounds), then topping it with chopped-up you tiao and bits of rousong, a.k.a. Chinese cotton candy made of ground, dried pork. A bowl of dou jiang needs some froth, too, and the king's cooks are especially attentive to pouring the soy milk from a couple feet high to aerate it. A bowl of hot soy milk is good on its own. It's even better when used as a Chinese dip for the carb-on-carb sandwich of shao bing filled with a fat you tiao.

As good as the soy milk is, I'd coronate Yonghe Dou Jiang Da Wang for something else—a pancake-omelet mashup made by cooking a thin layer of dough on the griddle, making an equally thin and wide omelet alongside it, and wrapping the two together around a pair of you tiao for the ultimate breakfast burrito. It only calls for a dunk in soy milk and a smear of chili paste.

Those familiar with Chinese cuisine will recognize most of these dishes. You tiao dipped in dou jiang is a classic Beijing breakfast, as is fan tuan, the carb rocket of you tiao stuffed with pork floss and pickles and wrapped in sticky rice, which Yonghe Dou Jiang Da Wang also does so well. But the wiggly, wobbly turnip cakes hail from way farther south, where they're called lo baak gou in Cantonese and typically ride the Lazy Suzan at yum cha (dim sum). Add in the popiah I scarfed down at lunch and we're looking at Fujian province, too—influences from all over China.

So it goes in a country that's faced cycle after cycle of political conflict, occupation, and upheaval. Taiwan is Chinese (a statement the PROC still takes very literally), but multiculturally so; its Han Chinese population hails from disparate mainland regions and includes Hokkien and Hakka minorities. Japan's colonial imprint remains strong, and modern Taiwanese eagerly drink in media and culture from there as well as Korea, France, and the U.S.

The very definition of Taiwanese cuisine may be this eclectic vortex of reformulated influences. As Cathy Erway puts it in her cookbook, The Food of Taiwan, "Politics aside, the idea of Taiwan as having a distinct and unified culture is a thesis that has been gaining support in recent years. Along with that, that Taiwan has a unified and distinct cuisine in and of itself; a cuisine that would have never been without the waves of migration and war, yet holds its own legacy."

The cuisine Erway describes is of course as diverse as the country itself, on matters of breakfast and otherwise. Instead of pancakes, countryside inns farther south served me congee with toppings of fresh herbs, pickled local bamboo, and crushed peanuts as toppings. And when tea seller and Taipei native Elena Liao comes home from New York, her family makes buttered toast and instant coffee.

But when they first pick her up from the airport, a trip to the pancake king often follows, tradition and special treat rolled in one. Breakfast this good deploys a certain magnetism, which is why, on my last morning in the country, I built in extra time to hit up the little pancake stand from 10 midnight snacks ago. The scene at 7a.m. looked much like at 1 a.m., and the floppy, flaky pancakes left the same happy film of oil on my lips. 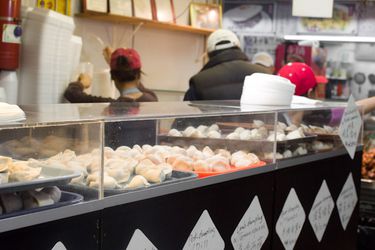 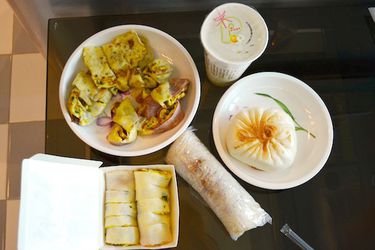