SXSW events are happening all over Austin, but here are some recommended spots in and around downtown, the nexus of the action, just in case you're still hungry after eating all the free food sponsored by start-ups and record labels.

Where are your favorite spots to eat in downtown Austin during SXSW?

Frank: Brunch at Frank should begin with a Red Headed Stranger: a Bloody Mary made with bacon-infused Tito's Vodka and garnished with cheddar cheese, pepperoncini, and a strip of bacon. Pair that with an artisan sausage or a comforting brunch dish like shrimp and grits. You can also grab a biscuit sandwich and Intelligentsia coffee to-go. 407 Colorado Street, Austin, TX 78701

Counter Cafe: This retro diner serves classics with a Texas twist. It's so tiny that you'll inevitably wait for a table, but it's worth it for dishes like the "Counter Benedict" - pastrami and poached eggs perched on top of flaky homemade biscuits, slathered in Hollandaise sauce. Counter Cafe is also open for lunch; popular options include the pimento cheese sandwich and a laudable burger. 626 North Lamar Boulevard, Austin, TX 78703

Fresa's Chicken al Carbon: Head to Fresa's if you drank too much free beer at the SXSW parties, and you need a hangover cure ASAP. Known for its char-grilled whole chickens, Fresa's also does excellent breakfast tacos with soft scrambled eggs and Lambert's tender smoked brisket. They're available everyday before 11am. 915 North Lamar Boulevard, Austin, TX 78703

Franklin Barbecue: The hype is all true. Aaron Franklin is making otherworldly smoked brisket (along with excellent smoked sausages, turkey, ribs, and pulled pork). But you'll need to line up as early as 9am to get in. The lines could be even longer during SXSW. 900 East 11th Street, Austin, TX 78702

Micklethwait Craft Meats: Head over to this brand-new barbecue truck if waiting in line for hours to eat isn't your thing. Tom Micklethwait is making admirably moist and flavorful brisket, but his handmade sausages are exceptional too. The choices rotate daily, but look for unique varieties like duck and cherry or beef with Thai chili. 1309 Rosewood Avenue, Austin, TX 78702

La Condesa: This upscale restaurant's contemporary interpretation of Mexican food has won over casual Austinites, partly because they serve the best margaritas in town. Portions are small and pricey, but packed with flavor and textures. Favorites include the huitlacoche huarache and the refreshing crab toastadas. La Condesa is also a popular brunch destination. 400 West 2nd Street, Austin, TX 78701

Pelons: Head over to this Tex-Mex restaurant smack in the middle of the SXSW action for admirable chips and queso, enchiladas, and fajitas. Tucked away in the back is a lovely patio beneath a giant live oak tree. You'll feel like you're sipping a margarita inside a peaceful tree house.802 Red River Street, Austin, TX 78701

Easy Tiger: This combination bakeshop and beer garden is adding sophistication to the Sixth Street scene. The kitchen turns out housemade cured meats and sausages complemented by freshly baked artisan baguettes, pretzels, and pastries. The food is best enjoyed in Easy Tiger's charming outdoor beer garden and washed down with a cold beer from their extensive list.
709 East 6th Street, Austin, TX 78701

Via 313: Two brothers from Detroit are making extraordinary pizza in the style of their hometown. Everything is made on site inside the tiny trailer. All of the dough is cold fermented for 24 to 36 hours to achieve the chewy texture and yeasty flavor. A generously thick layer of salty cheese is spread right to the edge, resulting in a caramelized and crispy crust. 1111 East 6th Street, Austin, TX 78702

Hoboken Pie: Northeastern transplants appreciate Hoboken's ability to recreate the New York pizza experience in Austin. Located on Red River Street (the heart of SXSW activity) and open until 3am, it's the perfect drunk food. It makes me feel like I'm back on 14th Street in Manhattan, biting into a slice late at night. 718 Red River Austin, TX 78701

Turf n' Surf Po' Boy: The po' boys at this walk-up sandwich shop are certainly different than what I ate while living in New Orleans. No shredded iceberg lettuce here—instead, expertly fried seafood is topped with mixed salad greens and red onion. The crispy bacon on the Naughty Catfish is a nice touch, and the hamburger and fish tacos are rumored to be excellent as well. 407 Lavaca Street, Austin, TX 78701

Jo's Coffee: Known for its coffee, Jo's actually has a large food menu including simple sandwiches and breakfast tacos. Sometimes all you want is a tuna melt or a grilled cheese. The herbed aioli in Jo's version with three cheeses adds some intrigue. 242 West 2nd Street, Austin, TX 78701

Casino El Camino: This dive bar is known for the ultimate late night food, such as the 3/4-pound burgers. Each burger variety is named after your favorite city (Buffalo, Los Angeles, Chicago, etc.) and served with fresh-cut fries. Grab a drink and enjoy the mesmerizing jukebox.517 East 6th Street, Austin, TX 78701

24 Diner: This updated diner is one of few places open all day every day. They're particularly known for their chicken and waffles with honey butter, but there are also breakfast plates and specials made from locally sourced ingredients.600 North Lamar Boulevard, Austin, TX 78703

Caffe Medici: Considered by many to be the best coffee in Austin. Baristas make espressos and cappuccinos right on Congress Avenue. 200 Congress Avenue #2B, Austin TX 78701

Halcyon: Sometimes I just want decent coffee-- not a fancy drink. Halcyon gets the job done while also offering a small menu of snacks and other drinks.218 West 4th Street, Austin TX 78701

Lucky's Puccias: This trailer shares patio space with the Tiniest Bar in Texas and specializes in puccias, flatbreads from the region of Puglia in Italy. Each one is baked to order, sliced while still hot, and filled with fresh ingredients. The namesake sandwich, Lucky's Puccia, is filled with salty slices of prosciutto, fresh mozzarella, spicy arugula, and tomatoes. 817 West 5th Street, Austin, TX 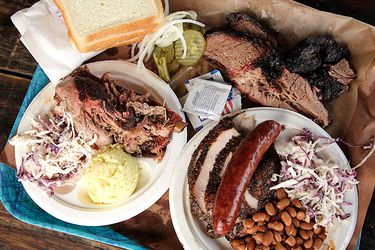