Oh man, it's been one of those days. Your computer isn't working correctly, but your IT guys doesn't want to help you. Your boss wants that important document fifteen minutes ago, but what can you do? Your mom is leaving passive-aggressive voicemails because you haven't called her in the last 24 hours. And on top of all that you realize you forgot to pay your overdue cable bill and you're starting to worry that you might have a service interruption to deal with before you can finally watch last week's Breaking Bad.

But at least you can have a Negroni when you get home. Ah, Negroni—bracing, bitter, and beet-red, and your favorite motivation-refresher on a crappy day. You think about it all the way home, in the car or on the train. How easy it is to make an equal parts drink, especially when you drink it on the rocks. No shakers or strainers to deal with, just a glass and some ice and a spoon.

So you walk into your house and suddenly remember. You're out of gin. Your spouse finished the bottle last night. After all, a screaming toddler and a broken dishwasher and a leaking ceiling is also grounds for an intense Negroni craving.

Now what do you do? Comb the house for replacement ingredients.

That's the purpose of today's piece. If you don't have X, maybe you have Y, and if you have Y, what can you make with it?

For example, if you have everything for your Negroni except gin, but you have rum, are you good to go? If you want a Sidecar, but you don't have triple sec, will the maraschino work, or do you need to schlep back out to the liquor store?

The first thing to think about here is, "Like replaces like." Swap one fortified wine (vermouth) for another (sherry, for example), when making a Martini or Manhattan. Brown liquors stand in well for each other, in drinks such as Manhattans or Juleps. Various liqueurs can tag in for others, within reason. For example, bitter amari sub in well for each other, as I'll talk about shortly, but an amaro might not be a great swap for triple sec in a Sidecar.

Think about the flavor of a given ingredient, and the role it plays in the drink, before attempting substitutes. You'd never try to build a Manhattan out of three vermouths and bitters. Why? Because the main ingredient needs to be a strong spirit for the drink to be anything close to Manhattan-like. Similarly, don't take the triple sec from a Sidecar and replace it with gin. You need a sweetening agent to balance the cognac and citrus. So try another liqueur, even one that's not fruity.

I'll start with the Negroni family of cocktails, because part of the drink's genius is its flexibility. It's no secret we're huge Negroni lushes here at Serious Eats; we've written copiously about this drink. So it's natural to assume we're fans of its many variants, whether the Kingston Negroni (with Jamaican rum in place of the gin; Appleton is good, but Smith and Cross is excellent), the Boulevardier (with bourbon or rum), or the Sbagliato (with Prosecco).

But don't stop at replacing the gin. If you want something Negroni-like, and you don't have Campari, you can try anything bitter: Gran Classico, Cynar, Cardamaro, Aperol, Ramazzotti, Averna, Nonino, Suze, and quite a few others. Each provides a different flavor profile to a classic Negroni, so feel free to play around with your ratios to get the balance to your liking.

You can swap in other vermouths to replace, say, Cinzano, but you won't find that the flavor changes as drastically as it does with other base spirits or amari. Carpano Antica Formula is a little woodier and vanilla-tasting than, say, Cinzano, but other differences between vermouths are subtler, especially in a boozy drink such as this.

Start with one half ounce each of your three ingredients, and add more of each according to your taste so that you can adjust as you go and mix until it tastes good without ending up with a monster-sized drink. (Unless your goal is monster-sized drink.)

The Old Fashioned harks back to the original cocktail. When it was first defined, a cocktail was a drink that included spirits (any spirit), water, bitters, and sugar. As cocktails became more sophisticated, a drinker who wanted a throw-back to simpler days would order an "old-fashioned" cocktail.

So generally speaking, any spirit can serve as the base in an Old Fashioned, and believe me, I've tried most of them: bourbon, rye, Scotch, Canadian, Irish; rum; cachaca; genever; gin; aquavit; tequila; even vodka, though I can't say I was impressed.

Try any base in an Old Fashioned; chances are, you'll love it.

I've talked about cocktail families before, and especially about the similarities among drinks in the Sour family. After all, what's a Sidecar but a cousin to the Margarita? One has cognac and lemon; the other has tequila and lime, but otherwise, they're nearly identical in how they're constructed.

Cointreau or other orange liqueur, fresh lemon or lime, and any spirit is likely to make a tasty drink. Mezcal, aged rum, and whiskey make especially nice sours as the weather cools. If you don't have triple sec on hand, try maraschino, cherry liqueur, or something floral, like St.-Germain Elderflower Liqueur.

Man, you can make these drinks with almost anything. A Manhattan made with a rich, funky rhum agricole is amazing, for example. We've also seen completely white versions made with unaged whiskey and Dolin blanc vermouth. A Cognac julep may not win you new besties at the Kentucky Derby, but it's a subtle and rewarding variation on the classic.

Remember that ingredients vary in sweetness, bitterness, and alcoholic strength, so you might need to adjust the quantities of each ingredient in your cocktail as you go.

If you don't have maraschino, try:

If you don't have sweet vermouth, try:

If you don't have dry vermouth, try:

If you don't have triple sec, try:

If you don't have Chartreuse, try:

For spirits (the strong stuff: we're talking gin, whiskey, rum, tequila, etc.) go ahead and try anything: you may change the character of the drink, but pretty much any spirit-swap is fair game, and it may yield an interesting discovery.

Come up With Substitutes Yourself!

Ever found yourself in a low-liquor-cabinet crunch and discover a drink ingredient substitution that really works well? Tell us in the comments section! 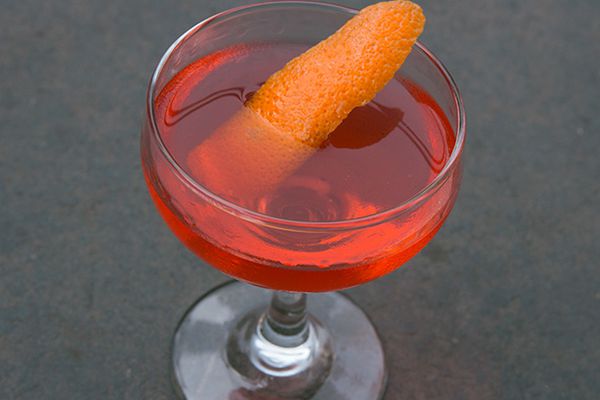