Makizushi may look like they are more difficult to make than say, nigiri, but with the aid of a bamboo rolling mat, they are actually quite simple. The key is to keep your hands moistened at all times in order to help you spread the rice thin enough, and to use fillings sparingly (I've had rolls burst on me, and believe me, it ain't a pretty sight).

After rolling into one large log, the rolls are cut into six individual serving pieces. When perfectly fresh, the rice should be tender but distinct (never cold!), and the nori should be soft, but not leathery. This is accomplished by using fresh nori (look for sheets that are deep green in color—they turn brownish as they age), and allowing the rolls to rest long enough that the nori loses its crackly crispness, but still retains a snap when bitten into. A few minutes should do.

Cutting raw fish for maki is exceptionally easy. All it requires is an extremely sharp knife and an extremely high quality fresh seafood, which should be purchased from a fish supplier or a supermarket who specifically sell fish for sushi or sashimi. Most often, the fish will come in blocks, like this piece of yellowfin tuna:

As with vegetables, try to cut the fish into strips with a cross-section approximately 1/2 an inch square.

Personally, I'm a maki-purist. I shun a lot of the overstuffed overblown Western maki in favor of simple hosomaki with a single, bright, clean tasting ingredient. My wife is the opposite. Which is odd, because she's skinny and I'm not. Opposites attract, I suppose.

What are some of your favorite maki ingredients or combos? 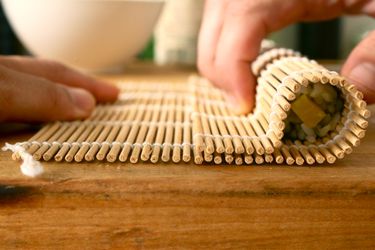 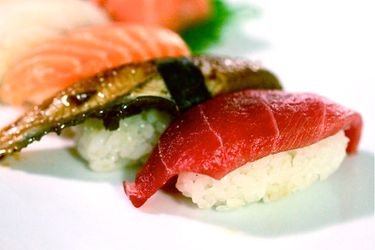