There's an undeniable allure about boils, be it Wisconsin-style fish, a Chesapeake Bay soiree centered around blue crab, oysters and clams, or—as luck would have it—Low-Country shrimp and vegetables, bobbling in a heavily seasoned broth that's redolent of cayenne, citrus and celery salt.

Pulling it off isn't hard, really, but it does require a keen eye, and attention to detail. The potatoes take the longest, but just how long depends on the type and size. Don't add the next ingredient—smoked sausage—until the spuds yield slightly when pierced with a fork. Cook the corn quickly; by the time the water starts to boil again, the corn is close to done.

The last stage, adding the shrimp, can be a little tricky. A word to the wise: resist the urge to use pre-cooked shrimp, which will just get tough. And do choose the shell-on variety: they're tender and more flavorful. As for cooking: the moment the surface of shrimp changes color and it's no longer translucent, it's done. A second more, and it'll be tough and rubbery. I recommend using uncooked, deveined, "ez-peel" shrimp, which offer the best of both worlds: the flavor factor you're looking for coupled with convenience. If you're using frozen shrimp, add another minute or so to the cooking time and keep the lid on the pot so the boil bounces back fast.

Timing is everything when it comes to a seafood boil, but the time ingredients will take depend largely on factors like potato size and whether or not shrimp are frozen. In other words, visual cues are key. So are napkins aplenty. When it's all said and done, be prepared to have at it. This is a casual, messy affair, and it's meant to be enjoyed in the backyard with a group of beer-swigging friends. 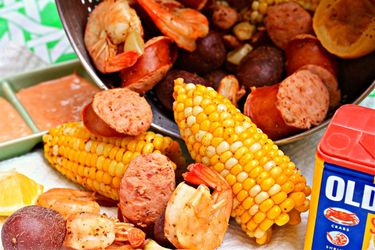