Answering the age-old question of whether the chicken or egg came first is easy—evolutionary biology tells us it was the egg. But trying to figure out the order of appearance of the soufflé omelette versus the more classic soufflé is a bit harder.

According to David Lebovitz, the Norman restaurant La Mère Poulard claims the soufflé omelette was invented by its original proprietor, Annette Poulard, in 1888. Or, at least, it claims she invented the specific omelette soufflé recipe served there (which, if that's the case, isn't much of a claim at all). That would put it about a century after Antoine Beauvilliers, who is sometimes called the "inventor of soufflé," and about 50 years after Antonin Carême—one of the founding fathers of classic French cuisine, who made dozens upon dozens of soufflé recipes of his own.

Meanwhile, in On Food and Cooking, Harold McGee republished Vincent La Chapelle's even-earlier "omelette soufflé" recipe from 1742, which calls for veal kidneys and sugar. It's all a bit muddled (as are kidneys and sugar—what the hell were they thinking?).

Instead of beating them whole and pouring them into a hot pan, as one does for a traditional French omelette, the eggs in a soufflé omelette are separated first. The yolks are beaten in one bowl and the whites in another, the latter until enough air has been incorporated to reach stiff peaks. Then they're folded back together to make a foamy mixture that cooks in a pan until browned on the bottom and just barely set on top.

The soufflé omelette is the easiest way to practice making any kind of soufflé, given the low barrier to entry. If you have some eggs and a few extra minutes to beat the whites, you can do it. No need to prep a soufflé dish or preheat an oven, and no need to make a béchamel or pastry cream base, nor bake it until puffed and browned.

Even better, once you've successfully made a soufflé omelette—which you will do on the first try, because it is easy—you will then be free of any lingering doubt you might have had about whether you are capable of making a classic soufflé, since the challenge of one is the challenge of the other, and it isn't much of a challenge at all.

But while the soufflé omelette can be a confidence-booster for making classic soufflés, it's also a valid dish all on its own, delicious as a light breakfast, lunch, or dinner.

The steps are as follows: First, beat the yolk with a generous pinch of salt. Adding the salt early is important because you don't want to deflate the mixture later while trying to evenly distribute it into the beaten whites. You want to add a little more salt than it might seem like the yolks need, since you'll want enough to also season the whites.

Next, beat the whites to stiff peaks, which means they won't slump over when lifted with a whisk. Just as with the classic soufflé, I'm a proponent of putting in a little elbow grease to beat the whites by hand. It gives you more control and makes it easy to spot the right moment when the eggs hit that perfect stage of firmness. It's not nearly as strenuous as some people make it out to be. That said, you're free to use a hand mixer or a stand mixer, if you prefer.

Fold half the whites into the yolks to loosen them. Don't worry too much about deflating this first addition of whites; it's more important to get a well-mixed, loose base.

This is the point where I'd mix in any flavorings, like herbs or cheese, which I strongly recommend—a plain-egg soufflé omelette is not nearly as tasty as one might imagine. It's as if the incorporated air brings out a kind of raw-egg aroma (this is something that often bothers me about meringues, too). Cheese manages to cover that flavor up.

After that, you can gently fold in the remaining whites until they're just incorporated.

I've seen recipes for soufflé omelettes that either do or don't call for covering the pan. I've tried both methods and had terrible results with the uncovered version, which left too much of the top layer soupy and raw (and I'm a guy who likes a runny omelette). I had much better results when I covered the pan just long enough for the eggs to barely set the top and for any extra cheese you may have scattered on top (which...why wouldn't you add?) to melt.

Then slide it out of the pan onto a plate, folding the fluffy behemoth over itself. It's an impressive sight and even more fun to eat, so tender and light.

Regardless of which type of soufflé was first invented, this is the one that'll be first on your list of soufflés to make with any frequency, because it's so darned easy. 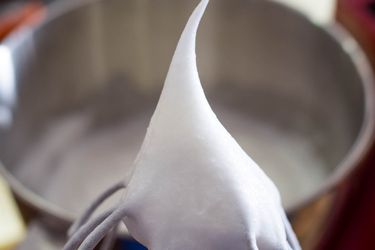 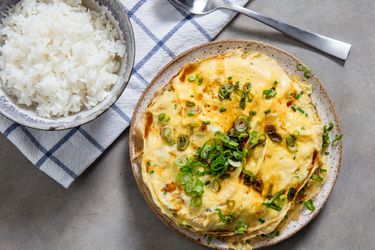 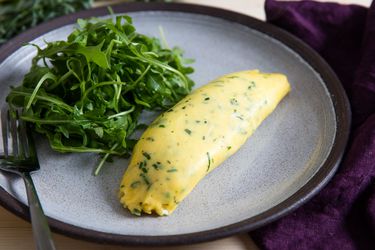 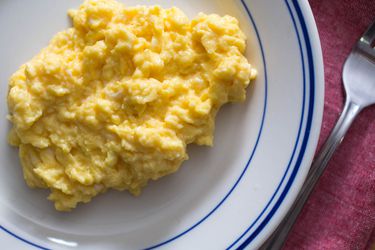