The best baked wings get a smoky, fruity strawberry sauce.

When you think of delicious bar-food-style chicken wings, Buffalo wings are most likely the first thing to come to mind. You might even think of grilled wings, basted with a tangy barbecue sauce. But you almost definitely don't think of baked wings, and I'd bet good money that strawberries and avocados aren't even remotely on your radar. After one batch of these wings, though, that just might change. It sure did for me.

I often find myself in a bit of a conundrum: I love the crunchy crust and juicy meat of deep-fried wings enough to make them all the time, but heating up a half-gallon of oil, frying the wings, and then dealing with the mess and lingering smell tend to put me off. I've tried baking wings that were coated in every possible crumb, but nothing came close to the crispiness of fried wings. Nothing, that is, until I tried out Kenji's baking powder technique. By tossing raw wings in baking powder and letting them rest overnight before baking, the chicken skin becomes dehydrated, which allows it to bake up as crisp as fried wings with a fraction of the mess. It's the stuff of wing-loving dreams.

I love the technique so much that I ate a few too many oven-baked Buffalo wings, and eventually realized that I needed to swap out the sauce. I've always been a fan of simple salads with grilled chicken, greens, and sliced strawberries, so somehow I thought to borrow from that by making a strawberry sauce for the wings. It still sounds crazy even as I type it, but all I can tell you is that it really is delicious. With smoky chipotle peppers, balsamic vinegar, and spicy ginger blended into the sauce, there's enough acid and heat to balance out the fruity sweetness.

To make the sauce, I heat halved strawberries, balsamic vinegar, ginger, garlic, and brown sugar in a medium-sized saucepan until the strawberries can be mashed easily with a wooden spoon.

The spoon should be enough to mash them fully, but if you have some chunks that refuse to break down, just give it a quick whiz with a blender or food processor to smooth it out. Then I mix in the minced chipotles with some of the adobo sauce from the can, and seasonings like onion powder, cayenne powder, salt, and pepper. The sauce will reduce as it's cooked, which I want to some degree. If it reduces too much, becoming sticky and candy-like, just thin it with a little chicken stock or water.

Playing off the Mexican flavor of the chipotles while also riffing on the Buffalo wing theme, I came up with a dip that blends avocado with blue cheese, as well as some sour cream and lemon juice. It's tangy, sharp, salty, creamy, nutty, and just absolutely delectable. This is best to make shortly before serving in order to prevent browning, but if you'd prefer to make it ahead of time, place it in a bowl, squeeze an extra tablespoon of lemon juice on top, and seal with plastic wrap, pressing the wrap directly against the surface of the dip to prevent air from touching and discoloring it.

After I bake the wings and toss them in the sauce, I sprinkle them with poppy seeds for an extra dose of nuttiness and crunch. I plate them with the dip, and then I run into a corner and crouch over them in secret so I can actually enjoy a few before my family and friends scarf them down. Can you believe that the first time I made these, everyone ate the whole batch before I could even taste a single one? After you try 'em, you'll see why.

If preparing the avocado blue cheese dip in advance, squeeze some extra lemon juice on top, then cover with plastic wrap, pressing it flush against the surface to prevent oxidation. 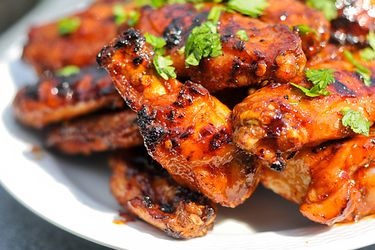 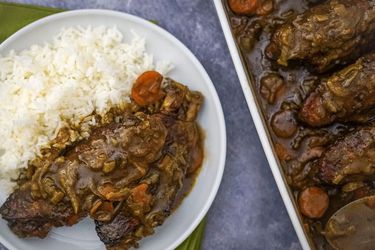