My mother has a way of transforming vegetal chaos into order. Some of my earliest memories in the kitchen involve watching her sort through vegetables. Sometimes she cajoled me into helping, but I liked to perch on the counter and observe instead.

Every night she methodically picked through heaps and heaps of leafy greens for bugs, slight decay, and stalks too tough to eat. Everything would have to be washed in numerous changes of water, then dried. My mother could process piles of vegetables in rapid procession, but sorting was always a lengthy chore.

Only after the vegetables were washed, sorted, and cut, did we turn our attention to the stove. The wok was heated, the oil was swirled through, and finally, the greens went into the wok for a few moments before being served. During the hour (or more) my mother spent in the kitchen every night, only a few minutes were actually devoted to the stovetop.

This was my overwhelming impression of eating in a Chinese household: for a cuisine that does so little actual cooking, a lot of time is required in the kitchen, preparing to cook.

The pleasure of cooking for many begins by turning on the stove. So much of the sensory enjoyment in the kitchen--the aroma, the transforming of water into soup--occurs on the stovetop. Before that, you're not really cooking but merely getting ready to do so. While different Chinese cuisines claim a different repertoire of soups and braises, requiring lengthy cooking times, most of the vegetables and meats are rapidly stir-fried.

A Matter of Necessity

Relying on the stir-fry method is mostly a matter of necessity. In the olden days, Chinese cooks were dealing with two conditions--there was a limited amount of fuel but an infinite supply of labor in the form of family and friends.

Stir-frying evolved to accommodate these circumstances--to exert less energy while employing the many free hands in the household. When my mother was a child in Shanghai, every morning started with the stove, a lengthy ordeal using the precious amount of coal available in those days. Even now, rural kitchens in China contain simple stoves made of stone--stoves that rely on a small amount of twigs and other undergrowth to build quick and fierce fires that need replenishing each time.

"Patience, rather than skill, is important when stir-frying vegetables."

Patience, rather than skill, is important when stir-frying vegetables. Some Asian greens, such as bok choy, require relatively little prep work. Most leafy greens, however, are time-consuming affairs, demanding discerning handiwork prior to cooking. Water spinach, ong choy, and snow pea shoots, for instance, are all leafy greens that must be washed, stemmed, sorted, and cut. One of my favorite vegetables for stir-frying is the amaranth plant with its vivid purple stalks and red leaves. When cooked, the plant releases a deeply pink dye, which, when consumed with rice, makes each kernel look like a jewel. As a child, I felt wealthy beyond measure eating my amaranth-stained rice.

Of course, the amaranth stalks weren't easy to prepare. My mom would work her way up from the bottom, snapping each stalk into one-inch segments. With every snap, stringy sinews would peel off the segment. At the end of her work, there would be a pile of segmented stalks and a pile of fibrous matter. The leaves would be chopped into thinner strips and pushed into a mound as well. At the end, there were always three piles.

Be adventurous when shopping for leafy Asian vegetables. Almost all the greens will be good, though some may have bitter notes. The Chinese are devoted to bitter-tasting vegetables, believing they cleanse the body of impurities. Turnip greens, swiss chard, and broccoli rabe are just a handful of Western vegetables that are good for stir-frying, and coincidentally require some prior picking time.

If you don't have time to sort through vegetables, try stir-frying bok choy. Regardless of whether you use baby bok choy or the more mature plant, a brief blanching of the stalks will do wonders for the texture. Without blanching, you'll need quite a bit of oil to tenderize the stalks in a short amount of time.

A quick blanching will drastically cut down on the cooking time and oil and preserve the crispiness of the stalks. If you can blanch the bok choy in a flavorful pork stock and use lard, all the better. 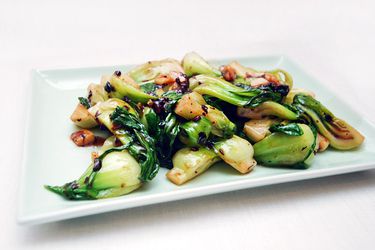 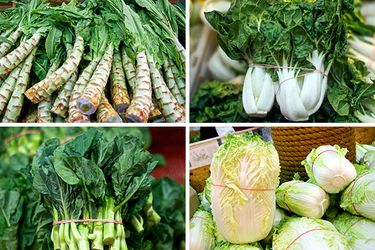 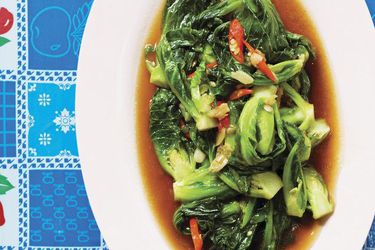 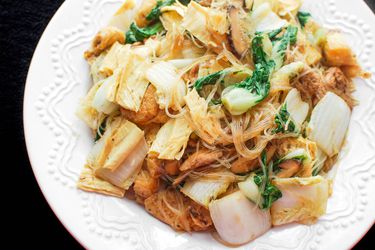 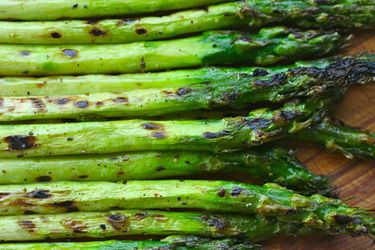 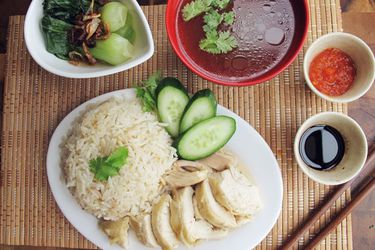