Chef Stephanie Izard is one busy woman, with Chicago's Girl & the Goat and Little Goat Diner pumping out meals all hours of the day. Izard got national recognition from a Top Chef Season Four win, but she's kept her focus on keeping her restaurants up to spec.

Her largely professional life is framed in the personal, though, with touches of her family weaved throughout her work; here's what she has to say about the kitchen tools that keep her going.

What I'd Save in a Fire

My Vitamix. It's awesome, and we use it for anything from spice grinding to making soups or aioli. We were just at an event and asked if they had a Vitamix since we needed to make an aioli for it, and they said "yeah," but they had the version for drinks, which is totally different; it only has one high speed, and it breaks all your aiolis and is super frustrating.

We use it for so many different things. They're not cheap, but luckily my chef de cuisine is really good at fixing things, so when something little goes wrong he can fix it. Ours get used and abused like crazy, but it will always be something stupid that breaks it, like someone dropped it on the floor! Or you'll walk into the cooler and it will be there because someone overheated it, so it's sitting there waiting to get back to normal.

I love the $1 plastic peelers we get from our knife store around here—they're shaped like a little Y; I'll buy a dozen at a time. When I go into another kitchen and they have differently shaped peelers it bugs the hell outta me, so I like keeping one on me at all times. It's about the way it feels in my hands—I'm a fast peeler. The Suzy Homemaker kind, which you hold upright, takes forever, and it feels awkward in my hands.

In our private dining room we have these three paintings hanging up of my relatives—but as goats (because my last name is a type of goat). It's my two grandfathers and my mom, who have all passed away. My mom's the golfer goat, there's an artist goat and a newspaper goat, since my grandfather was the president of the Tribune. So it just sort of connects the reason why we're named Girl & the Goat and Little Goat.

It was cool to tell the artist about my relatives; my mom was the reason I became a cook. A lot of chefs say that their mom was a terrible cook so they cooked out of necessity, but my mom fell into the awesome camp. Every Sunday she, my sister, and I went through recipes and cookbooks and planned meals for the week, and then went to the grocery store and got everything to prepare, and we had a menu hung for the week. And we would have things from all over the world, so I think that's where my interest started in cooking things from multiple cultures.

Plugra butter. We've tried a number of different butters but Plugra just tastes really good. It's one of those staples, and I feel like a lot of people have it in their minds that "all butter's created equal," but Plugra tastes better, is priced well, and it works really well for the restaurant—we use butter in so many dishes that the flavor really matters.

I just brought some stuff back from my honeymoon in Belize; they had hand-carved everything there, so I brought back some wooden spoons, a rolling pin and a cutting board. Some of it is more decorative, but I use them because they're just so awesome and are made to be used, really. The rolling pin is one piece of wood, carved out. It's up in our private dining room kitchen, where it's not going to get messed up. We use it for a rolling a lot of crackers really thin, and different kinds of crusts.

I have a couple of spice blends that we make in house and I love, which are an easy way to add flavors to things. We have one called "Razzle", which is based sort of on ras el hanout. It's fun; we use it on our home fries and lamb ribs, a variety of random things. And we have another one we call the UnBelizeable Spice Rub. When I was in Belize one of our tour drivers found out I was a chef and told me I had to get this one type of spice rub, so we went and got a couple little packets. I took it home and tried to make my own version. It has a lot of acidity with some lemon rind, and we add a little malt vinegar powder, and it's awesome, especially on chicken.

We make our own spice mixes based on ones that have been around for hundreds of years, so I'll look at that tradition and then make it my own. I love fennel and anise in all of my spice blends, and mustard seed. I don't like a lot of black pepper because it's really spicy to me in a way, so I'll put just a little black pepper and maybe add some pink peppercorns. Think about the different flavors you like; that's what makes it your spice blend.

The power of a wood-fired grill and oven. I'd never had one before, but once you go wood-fired you never go back. Everything—meat, seafood, and vegetables—just tastes amazing. We do a grilled broccoli and a lot of vegetarians love it—the wood fire makes it taste like bacon.

Hey Chef, What Can I Do With Curry Powder? 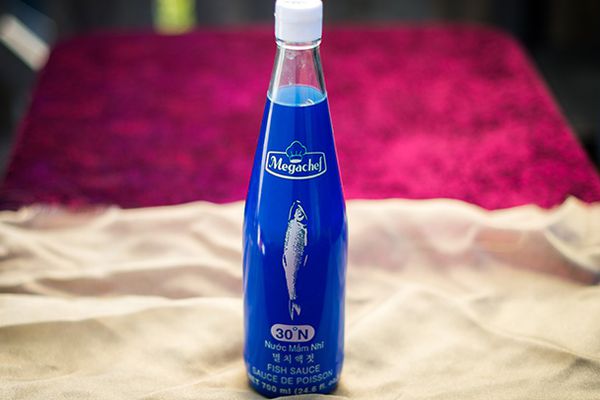 Hey Chef, What Can I Do With Fish Sauce?