"Brains? Sperm? That's when a friendly conversation turns a corner."

Air travel is a great time to practice the fine art of conversation. Some of the more interesting chats I can remember have taken place with strangers on a plane. In an era in which technology presents ample means to avoid face-to-face interaction, planes thousands of feet up in the air may be one of the last refuges from cell phones and online chatting. On my recent flight home there was just one other person sitting in my row, an elderly lady who smiled encouragingly at me over the scarf she'd been knitting. Twenty minutes later, we were halfway through my portfolio of pictures.

"Those are pigs' tails," I told her, scrolling down the page. "Some of my favorite bits."

"And what's that, dear?" she asked, pointing to a milky white mass—twisted, spiraling, with pink veins laced throughout.

I stopped clicking on the pictures. "Oh, that? Well, that's cod milt," I replied somewhat reluctantly.

"What's milt?" she asked. Just as I expected. Milt is a word that few outside of the high-scoring Scrabble community would know.

"It's um, sperm," I said, coughing a bit on the second word.

"What was that?" she said, cocking her left ear toward me.

Brains? Sperm? That's when a friendly conversation turns a corner.

It took me a few minutes to disarm her sensibilities about eating fish sperm, after which the lady grew curious about its culinary attributes. How do you describe the texture of milt to someone who hasn't tried brains?

Sacs of cod milt are most accurately likened to pork brains, yet with a lighter, finer texture. Steamed, milt is as soft as an egg custard; pan- or deep-fried, the surface crisps up while the interior remains soft and creamy. The taste of milt is subtle; there's a slight sweetness and just the faintest hint of its oceanic roots.

The Japanese call it shirako, kiku, or tachi. Harvested from fish such as cod, anglerfish, monkfish, and sometimes fugu, most types of the seminal fluid are in season during winter. If you're fortunate enough to find it at your Japanese market, consider trying one of these preparations.

Steaming captures the sweetness of milt. I steamed a section of the milt in a broth of dashi, mirin, and soy sauce. A few strands of softened wakame completed the bowl; for additions to the soup, try a few sections of simmered daikon or lightly sautéed shitake mushrooms. Steamed over low heat, the surface of the milt turns completely opaque while its ridges tighten and become more defined. Alternatively, try steaming sections of the milt as an addition to chawan mushi.

Treat milt like a nice piece of calf's liver. Heat a cast iron until it's smoking hot; then salt and lightly dredge the milt in flour. Pan-fry the milt for one minute on each side, until the surface is crisp and golden brown. Serve with rice and a wedge of lemon.

When fried in oil, milt needs to be thoroughly coated to protect its delicate, tender texture. Milt tempura is not as lacy as vegetable tempura, but the crispy batter encases a soft and creamy interior. 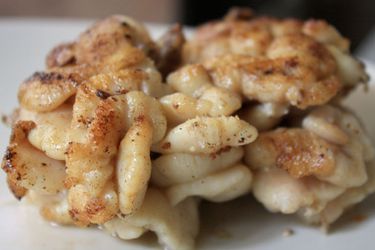 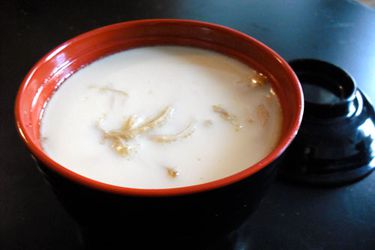