3 Steak Marinades to Jazz Up Your Grilling Routine

Here is a fact: A quality piece of meat, cooked perfectly, needs nothing more than a generous seasoning of salt and pepper (and frankly, if you get the salt right, you can survive without the pepper). This is true of chicken, of pork, of lamb, and of beef. And yet, sometimes we want more, or at least...different. This can be especially true during grilling season, when the procession of burgers and steaks coming off the grill can start to feel mundane. With that in mind, I whipped up a few marinade ideas to change things up this summer.

Before I describe each one, it helps to go over just a couple key points about marinades in general. (Kenji offers a more in-depth explanation of what makes a great steak marinade here and here.) The first is to remember that marinades are primarily just surface treatments, which means that extended marination times don't lead to significantly deeper flavor penetration. The greatest flavor effect of a marinade on meat occurs within the first hour or so. The photo below shows two steaks side by side, which I left in the same marinade for two different periods of time: one hour and 12 hours. Despite the significant time difference, it's difficult to tell which is which. The pigment molecules, at least, didn't travel much further into the meat even when given many more hours of contact.

The main exceptions to this rule involve salts, acids, and some enzymes, which are able to penetrate more deeply over time. That can be good in the case of salt, since salt alters muscle proteins, allowing the meat to retain more moisture during cooking.

Acids and certain enzymes (such as from pineapple), meanwhile, can act as tenderizers. But if they're left in contact with the meat too long, acidic marinades and those that contain tenderizing enzymes can begin to turn the meat mushy and chalky. In such cases, it's better not to marinate the meat for more than six hours or so. My three marinades here aren't particularly high in acid, so that shouldn't be too much of an issue, but it's worth keeping in mind if you make your own marinades with vinegars or citrus juices.

Coffee and chocolate sound like strong flavors, but they take on a delightfully mild tone in this steak marinade. I combine them with some brown sugar, which helps the steak develop a deeper crust more quickly on the grill, and a pinch of chili powder for a subtle, spicy warmth. I go light on the chili heat, but you could add more if you want it to be more pronounced. Mostly, the coffee and chocolate add a slight bitterness that underscores that charred, grilled flavor; the chocolate contributes an additional round butteriness, presumably from the cocoa butter.

For this one, I popped a bottle of light lager, then infused it with fresh ginger, lemongrass, coriander seed, thyme, and lemon zest. These are flavors that go well with a wheat beer, but I figured I'd rather save that for actual drinking and not just marinating. Olive oil in the mixture helps extract some of the fat-soluble flavors of the aromatics. The result is a lightly funky and herbal flavor that pairs well with fatty steaks, like boneless short ribs.

When I was a kid, I spent summers on Cape Cod visiting family. For a couple years in a row, we bought these "Black Diamond" steaks, which came pre-marinated. I'm not sure who originally produced them, but Tyson now seems to be the maker. (Some unofficial sources online say Tyson bought either the company or the recipe, but I'm not sure exactly how it worked.) I haven't actually eaten a true Black Diamond steak since I was a kid, so the flavor memory is fairly distant. I considered ordering them from Tyson, but I could only find them in bulk for several hundred dollars, so I ditched that idea. You can find other Black Diamond marinade recipes online, but I've read through their ingredients, and they just don't sound right to me. I've also looked at Tyson's ingredient list, but it doesn't shed much light beyond the caramel color used for darkness and some dried onion and garlic for flavor; clearly, some secret is hidden in the marinade's "natural flavors."

In the end, I decided to go my own way, creating a dark, deeply savory marinade with plenty of soy sauce, Worcestershire, balsamic vinegar, and onion and garlic powders. It tastes the way I remember those Black Diamond steaks from my childhood tasting. Though who knows—it's been about 30 years. 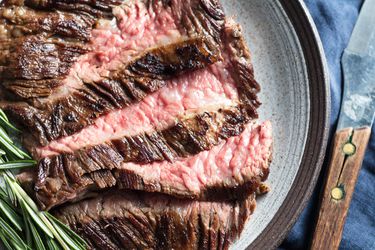