Google "steak and eggs" and it's kind of amazing what doesn't pop up. I was expecting hundreds of crazy renditions of this gluttonous breakfast classic. But most of them were shockingly traditional, if also kind of boring. But perhaps when you combine steak and eggs you don't really need anything else. The egg yolk is already a perfect sauce, and a well seasoned steak is a thing of utter beauty.

Why anyone wants to eat something as heavy as steak and eggs is another story. Here's my excuse: I had just come back from a long run and had some hanger steak in the fridge. I was starving, and for some reason steak and eggs sounded like the greatest thing in the world. Why deny such a craving?

The only secret weapon I used was smoked paprika. This is the time for the expensive Spanish stuff. Just a little bit sprinkled on the end adds a grilled edge to the meal, even though everything is cooked in a skillet. I also served it with some crunchy hash browns, which I stole from an old Dinner Tonight. They are always a good idea. 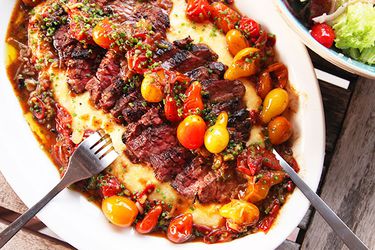