I don't like to write about proprietary spice blends, especially when you can't find them in the U.S. The way I see it, the food media world doesn't need more of "here's this fantastic thing you can never hope to find" pieces. But sometimes you have to make an exception.

You see, when I visited Turkey a couple years ago, I was struck by a fast and vicious case of food poisoning...right before I was about to enter a spice market. I couldn't handle complicated spices over that illness-ridden trip, a heartbreaking shame considering the magic Turkish cuisine makes with them.

So when Christine brought me some spices after her recent Turkish adventure, I tore into them immediately. One blend in particular, from Ucuzclar Baharat in the Istanbul spice market. Labeled as Janissary Spice,* it's made with sweet red chile, oregano, and sumac. And though I can't say with certainty what specific chile went into the blend, nor what the blender's ratios were, nor how much crack was slipped in surreptitiously, I can tell you that this blend works. It's a beautiful thing, a powerful lesson in the magic that comes from blending chiles and herbs.

*The janissaries were the infantry corps of the Sultan, conscripted as children from Christian and non-Turkic subjects of the Ottoman Empire.

"The resulting flavor is so many things at once: sweet, herbal, spicy, and almost meaty."

When chiles are dried, they lose some, if not all, of their pungent grassiness. They trade it in for sweet, fruity flavors that run the gamut from fresh-picked berries to dark raisins to jammy cooked tomatoes. Blending herbs with dried chiles restores some of their greener flavors while complimenting their newfound sweetness. The resulting flavor is so many things at once: sweet, herbal, spicy, and almost meaty. It makes for the unique kind of satisfaction that comes from a dish that tastes complete.

Adding oregano to tomatoes is by no means a new trick, nor is combining it with tomatoey sweet and ultra-savory chiles. But it's one worth paying attention to, and it goes toward understanding what makes these flavor combinations taste so right—so perfect they need little adulteration. Think about it: When we do adulterate that oregano-rich New York-style pizza sauce, it's usually with some chile flakes. (Okay, and maybe some parmesan, but that's not how we roll in Istanbul—or Constantinople.)

My guess is that my Janissary spice was made with a variant of Turkish maraş chiles, which are intensely sweet, not that hot, and carry the rich flavors of sun-warmed tomatoes with hints of red bell pepper. If you wanted to recreate this blend (and I highly recommend you try), you can find maraş chiles at Cambridge's Formaggio Kitchen and Oakland's Market Hall foods (both sell online as well). Easier-to-find aleppo makes a good, if not more tart and spicy substitute.

Start with a chile to dried oregano ratio of two to one, and add just enough sumac to brighten the flavor—a quarter to half the oregano to start, depending on how sweet and tart your chile are. If you aren't familiar with sumac, this blend is a great way to get your toes wet. It's often used to add mild tartness to ingredients where added liquid would be unwelcome.

Make your janissary spice in small batches to use in lentil and vegetable soups, scattered over roasted vegetables, or with meat of all kinds. Tomatoes are a perfect foil for the spice, as are any vegetables cooked with ample amounts of olive oil. It's especially well-suited to lamb, such as in this recipe for soft baked eggplant halves with a sauce of braised ground lamb, walnuts, and tomato. It may not be a traditional Turkish dish, but it's a good one, and faithful to the spirit of the cuisine.

And don't be afraid to serve some janissary spice in a little dish at the table to accompany whatever else you might be serving, as is often done with chiles in Turkey. It's the Asia Minor equivalent of the oregano, chile flakes, and parmesan you'll find at any slice joint. Good ideas travel well. 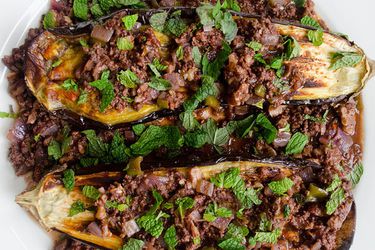