When I get home after a late night out, with a craving for something starch- and fat-heavy to help put me to sleep and stave off the inevitable morning-after hangover, my go-to used to be to raid the fridge and shove whatever I could find into corn tortillas for some impromptu tacos. Since I started testing on cacio e pepe, however, those eaten-by-the-cold-light-of-the-refrigerator tacos have become a thing of the past.

It's not that I didn't know what cacio e pepe, the Roman dish of spaghetti with Pecorino Romano and black pepper, was—cacio e pepe translates to "cheese and pepper"—it's just that I'd never really had a fantastic version of it. It's not really a restaurant dish, though there are restaurants that serve it, mostly of the cheesy (no pun intended) type where they toss the pasta table-side in a hollowed wheel of Parmesan, while dispensing black pepper willy-nilly with comically oversize pepper mills. It's not really even a dinner party dish, though there's nothing stopping you from making it for dinner. It's a snack. It's something you make for two or three friends on a whim whenever you feel peckish. My only close Roman friend preferred to make us carbonara, which meant that cacio e pepe completely bypassed me.

If you were to watch a practiced hand make cacio e pepe, you might think the instructions were as simple as this: Cook spaghetti and drain. Toss with olive oil, butter, black pepper, and grated Pecorino Romano cheese. Serve.

But we all know that the simplest recipes can often be the most confounding, and so it is with cacio e pepe. Follow those instructions and, if you're lucky, you'll get what you're after: a creamy, emulsified sauce that coats each strand of spaghetti with flavor. More likely, you're gonna get what I (and, from the stories I've heard, many others as well) got on the first few tries—spaghetti in a thin, greasy sauce, or spaghetti with clumps of cheese that refuse to melt. Or, worse, both at the same time.

So what's the problem? The main issue is that we're trying to make a creamy sauce out of a very hard, dry cheese. It helps if you think of cacio e pepe as the Roman equivalent of American macaroni and cheese. In my article on making homemade macaroni and cheese, I found that the younger the cheese you're working with, the easier it is to melt: Young cheddar, jack, or American cheese makes a much creamier, smoother mac and cheese than, say, extra-sharp cheddars or Gruyère.

The problem with older cheeses is twofold. First, they're relatively low in moisture, which means that they're more prone to breaking—their internal fat wants to escape. Second, they have a much tighter protein structure. The first problem is easy to fix: Just add more water to the mix. Using the water you've cooked your pasta in is especially effective, as it adds starch, which can help to thicken and emulsify the sauce.

Fixing the problem of clumped proteins is more difficult. As the cheese is heated, those proteins, with the help of calcium, have a tendency to stick to each other in long, tangled chains. Heat up your cheese too fast and you end up with large balls of protein that refuse to break down no matter how vigorously you stir, and heating them only makes them tighter.

You can clearly see this happening if you try to cook cacio e pepe in a pan that's too hot: The cheese proteins form a film on the bottom of the pan.

The only real solution is to not let it happen in the first place. There are a few ways you can go about this. In Cook's Illustrated's version of the dish, developed by my good friend (and Serious Eats contributor) Yvonne Ruperti, she relies on a few tablespoons of heavy cream to ensure that the cheese melts smoothly. It works well, but it also removes some of the convenience factor from the dish: Heavy cream is not a pantry staple in my home. I also find that heavy cream can dull the flavor a little bit.

Some recipes call for huge amounts of butter. Butter can also help the cheese melt smoothly, but, as with heavy cream, I find it can dilute flavor more than I'd like.

Harold Dieterle suggested to me that ground cheese works better than coarsely grated. He's right. Switching to the smallest holes in a box grater or using a Microplane upped my success rate a great deal—the ground cheese gets heated more evenly and melts faster without clumping. It's still not 100% successful, though. Perhaps altering my process was the solution I needed.

Up to this point, I'd been following pretty standard one-pot cacio e pepe methodology: Cook the pasta, add the other ingredients, and stir to combine. I know that heat is the enemy of hard cheeses, so I'd been adding the cheese off-heat, but could it be that my pan had too much retained heat to begin with?

I found my solution by switching over to a two-pan method: Cook the pasta in one, then build the sauce in the second and add the pasta to it. With the lower heat of a second pan, it's easy to make a creamy sauce that doesn't clump or break, and, once the cheese is properly incorporated, you can then reheat the whole shebang without fear of the cheese clumping up. Maybe there is more to that cheesy restaurant technique of tossing the pasta in a hollowed-out wheel of cheese than just showmanship: It's a good way to add cheese flavor without the risk of accidentally overheating it to the point of clumping.

There was a second, unforeseen advantage to using a second pan: better flavor development. We all know that toasting our spices can improve their flavor, creating new volatile aromas that add complexity and smoothing out the harsh edges, right? For some reason, black pepper always seems to get a pass from toasting. We store it in pepper mills and grind it straight into our food. But anyone who's had a great steak au poivre knows that the flavor of pepper can change when you toast it in oil, becoming sweeter and more mellow. Toasting pepper in oil also distributes its flavor more evenly throughout the dish.

I tried it out on my cacio e pepe, toasting black pepper in a little olive oil and butter in a separate skillet on the side (and cooking it far enough in advance that the pan would cool sufficiently while the pasta cooked). The flavor improvement was immediately noticeable, especially when I stacked it with more freshly ground pepper at the end, giving me both sweet and sharp flavors. In order to avoid accidentally browning the butter, I decided to keep it out of the skillet until after the pepper was toasted.

Another trick I picked up here is to cook pasta the lazy way: Don't bother using a large pot of water. Not only is tons of water generally unnecessary, but with a dish like this that relies so heavily on the starch imparted by the pasta cooking water, cooking with a smaller volume of water is actually beneficial, as it concentrates the starch. Cooking my spaghetti in a 12-inch skillet with just enough water to cover it produced pasta that was perfectly al dente, and water that was really heavy on the starch. Plus, it saves time, since you don't have to wait for a large pot to come to a boil.

The other lazy step I tried that ended up proving helpful was transferring the pasta directly from the water to the oil and pepper mixture, using tongs instead of draining. This not only saves you the trouble of having to wash out a colander and an extra cup (for reserving pasta water), but also keeps you from having to add most of the pasta water manually, since there's plenty stuck to the pasta itself.

Once the pasta is in the pan, it's a simple matter of stirring in the cheese, a little extra black pepper, and a little fresh olive oil until it all comes together. I find that holding my fork almost horizontally and swirling the spaghetti around is the most effective way to make this happen.

Now that's what I call creamy! In true tipsy-at-midnight fashion, I find cacio e pepe is tastiest when eaten straight out of the skillet, and that the best bites are the first two or three you take on the way to the table.

The only downside to all this cacio e pepe testing is that I typically bring leftovers to my neighbors. I realize, though, that delivering midnight pasta to a family with two kids is probably not the best way to win neighbor points. Oh, well, I guess this just means I have to continue to eat it all myself.

I guess that's not much of a downside after all. 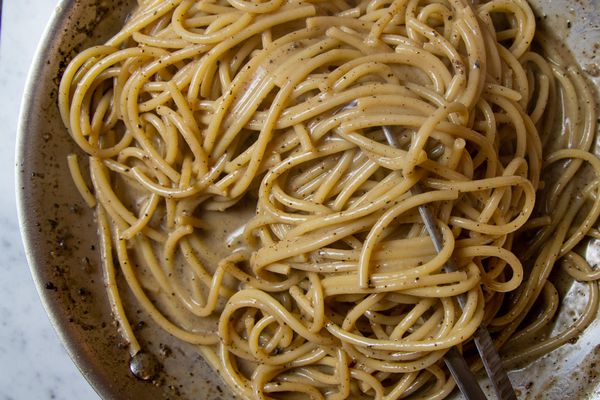 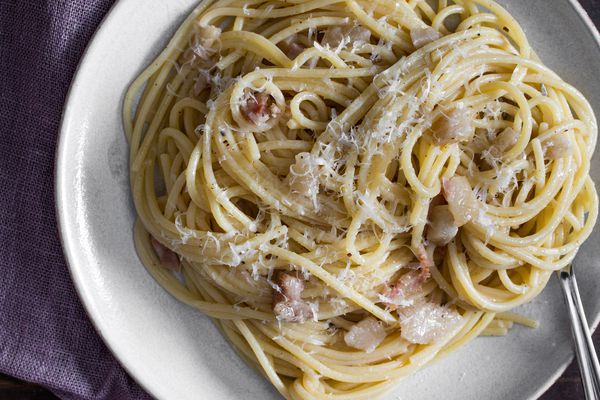 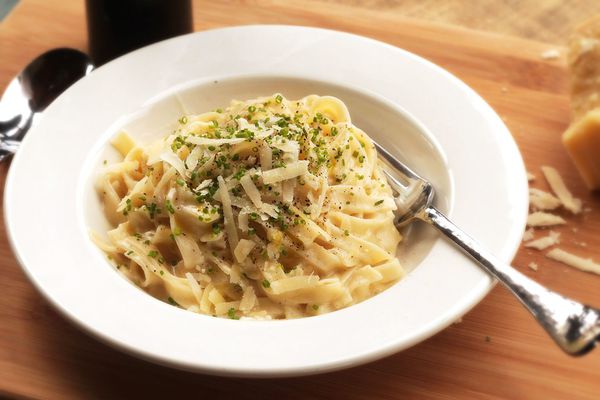