A juicy, evenly cooked ham with a simple, delicious glaze.

Ham is not for everyone, but if you're a ham lover, lucky you, because ham is one meat that's darn difficult to mess up. Right off the bat, it's got several things going for it. First off, it's pork, which means it was born to be delicious. Second, it's got the right level of seasoning built into it—a good ham will have the right salt level all the way through to its very center. Third, because it's a cured product, it retains juices far better than a plain, raw product.

Want to make it even juicier and more foolproof? Cook the sucker sous vide. Because hams are precooked, it's really just a matter of reheating them. Typically, I'd suggest removing meat from its retail packaging, seasoning it, then resealing it in a sous vide bag before cooking it. But since ham's pre-seasoned, it can be cooked directly in the package it comes in, making the whole process even more appealing.

How to Sous Vide a City Ham

Step 1: Start With a Good Ham

Hams come in various levels of quality, ranging from giant, chopped-and-formed Spam-like creations to actual whole-muscle cured and cooked cuts. The latter is what you're after. Once you move into the whole-muscle realm, even the standard supermarket option (Cook's brand is the most popular) will do, but you can also try a specialty ham, like this Kurobuta ham from Snake River Farms if something a little more flavorful is on the agenda. For cooking in the oven, I'd generally recommend an un-sliced ham, as those spiral slices are a direct route to moisture loss. But with sous vide cooking, you're going to be heating the ham in a sealed plastic bag anyway, so spiral-cut hams will work just fine.

One thing to note: What you're looking for is a city ham, which is brined and cooked, as opposed to a country ham, which is salted and cured raw in the air, like a prosciutto or serrano.

Since city hams come precooked, you can serve them cold straight out of their packaging, but they're better when warmed up. If you're cooking ham using conventional means, this involves slow-roasting it using foil or an oven bag to attempt to keep those juices from drying out. With sous vide cooking, it's as simple as dumping the ham into a water bath, directly in its packaging. I cook my hams at 140°F (60°C) for three hours to guarantee that they're piping-hot through to the center.

Hams, with their smokiness and natural porky sweetness, have an affinity for sweet-and-sour glazes (hence the whole pineapple-and-cherry thing). In this case, I've made a quick brown sugar and balsamic vinegar gastrique by caramelizing some brown sugar in a saucepan, then deglazing it with balsamic vinegar and letting it reduce down into a sticky glaze. You could just as easily use any other type of vinegar and sugar.

Once the ham is reheated, the only thing left to do is glaze it. In order to get that glaze to stick, you want to brush it on and then roast the ham in a very hot oven so that the glaze further reduces and coats the meat. A 500°F (260°C) oven is ideal.

Step 5: Give It the First Coat

As with painting a wall, the best way to build up a good, even coat of glaze is to work in layers. Start by painting one layer on before popping the ham into the preheated oven.

Continue brushing the ham with fresh glaze every five minutes, for a total of three or four coats. When the ham is shiny and shellacked all over, you're done.

Step 7: Get Ready to Make the First Cut

I'm a fan of practicality in the kitchen, which means that I'd rather serve my ham pre-sliced and ready to eat than fumble around at the dining room table trying to serve it. Here's the easiest way I know to slice a bone-in ham.

It can be rather impressive to make lots of thin, parallel cuts toward the bone, so that you can then release the slices all with a single downward stroke, but here's a much easier way to do it: Start with that vertical cut first. To do this, identify where the bone is (hint—it's where that big, bone-shaped knobby bit sticks out of the ham), then slice down along one side of it.

Rotate the piece you just cut off so that the cut side is facing down, then slice it into thin serving portions. You'll notice that, because of the gentle, in-the-bag preheating, your ham is about as moist as you could hope for, with a juiciness that extends all the way from the edge to the center.

Serve up that ham with some good wine, a big fork, and extra glaze tableside.

Most hams come in thick vacuum-sealed packaging that can be used for sous vide cooking. If not, seal your ham in a vacuum-sealed bag before cooking it sous vide. 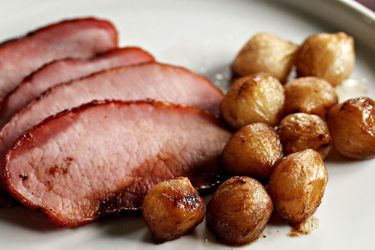 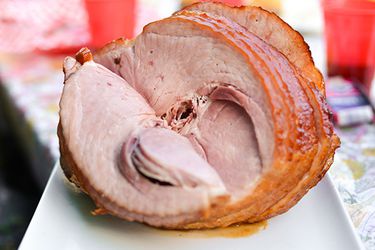