Ever since I posted the Sourdough Starter-Along series here on Slice, I've been getting a lot of questions. I've gotten them at Serious Eats, on my Facebook page, at my blog Cookistry, and in person. Based on some unscientific polling software (ahem, my memory) these were the six most commonly asked questions about sourdough starters, along with my answers.

My starter doesn't look like yours. Have I done something wrong?

No, nothing's wrong unless you've got mold growing on the starter, or unless you've got no activity at all after about five days. Starters are all different because the flour, water and environment are different at every location. That's part of the beauty of a sourdough starter. It's unique to you and it can be a little bit different every time you use it.

Also, the photos I posted were just one moment in time. After feeding and stirring or later in the day, the bubbles probably looked a bit different. In general, the bubble activity should be increasing every day, but sometimes things stall. And if the starter is very active overnight, it can wear itself out and look quiet in the morning. Shortly after feeding and stirring, it should become more active again.

What if my starter is bubbling but not rising up?

When the starter is active enough to rise up in the jar, then it's ready to use. That might happen in as little as a week, or it could take longer before it gets to that point.

If your starter is still plugging along, bubbling but not getting increasingly active, I'd suggest dumping half to three-quarters of the accumulated starter, and then continue feeding and stirring the remainder. The removed starter can be added to a regular bread recipe to flavor it. I have recipes here and here for using not-quite-ready starter.

It also might be the case that your starter is rising, but you're not there to see it. If you feed at night, it might be rising up while you're asleep, and by morning it has fallen again, so it looks the same. It might be a good idea to feed at a time when you can check the starter in an hour and see what it looks like at that point.

What is the liquid at the top of my starter?

There are two causes. One possibility is that the starter is too wet, so you can add a bit more flour to it. It should be a little thicker than cake batter, almost like muffin batter.

The other possibility is that that liquid might be what's referred to as "hooch", which accumulates when a starter has been sitting around a while and the critters have gone dormant. As long as there isn't furry mold, you can keep going—the yeast may have munched through all the available food. You can dump out half of the starter as I suggested above, and you can also increase the amount you feed. Feed a little more at each feeding, feed more often, or both.

Does the temperature of my kitchen affect the starter activity?

Yes, very much. The starter will be most active at warm room temperatures, so if you keep your house cooler in the winter, it might be less active simply because of the temperature. You can move the starter to a slightly warmer location. The top of the refrigerator is good, or if you've got some other appliance that's a little bit warm, you can move it there.

You don't want to get it too warm, so the top of the furnace or water heater might be overkill. Having it develop slowly isn't a bad thing if you're not in a hurry.

Why is my bread taking forever to rise?

You might have harvested your starter before it was fully active. After you've had a starter going for a while, you'll have a better idea what it looks like when it's fully enthusiastic. But a slow rise isn't a failure. Just let it rise at its own speed.

If it's a matter of bad timing and you don't want to stay up all night waiting to put it in the oven, you can put the loaf in the refrigerator for a really slow rise, and bake the next day. Some sourdoughs rise slowly and don't seem to want to double in size, but then they get tremendous oven spring. Yours might be like that.

My bread isn't as sour as I expected. Can I fix that?

Sourdoughs are all different, but the sour flavor that people associate with sourdough comes from the bacteria that produce different acids at different points in the process. You can create a much more sour starter by stopping the feeding and letting the starter go hungry for a while. You can do this for a day or so at room temperature, or put the starter in the refrigerator for a little longer. Sourdough starters develop more flavor as they age, so what you get from that first loaf isn't what you'll get after the starter matures for a while.

Also, you'll get more flavor if the dough has a long, slow, cold rise. Rather than letting is rise on the counter, put the dough in the refrigerator and leave it there for a day or two before you form the loaf and let it rise for baking.

One thing to keep in mind is that all starters are different. The schedule you feed at, the flour and water you use, and the environment all change the way the starter behaves. Some are naturally more sour, they rise at different rates, have more or less oven spring, and produce different crumbs and crusts. That's part of the fun of having a local starter.

And of course, the flour you feed your starter makes a difference. If you're ready for it, you can start a new starter with whole wheat or rye flour, and see what new magic you can create. 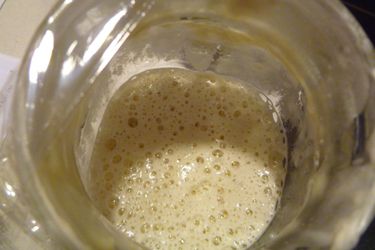 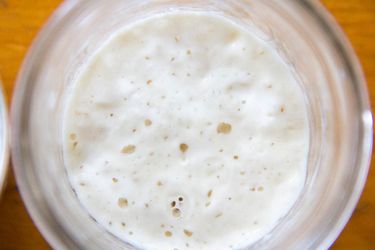 The Science of Sourdough Starters