One theory maintains that the golden color of the hard-boiled eggs have been deep-fried and thoroughly doused in a deep golden colored sauce. With the Thai culture being quite entrenched in symbolism, it's not beyond the realm of possibility that the golden color, which reminds one of actual gold, is linked to wealth, something the parents of a woman naturally hope for in their future son-in-law. 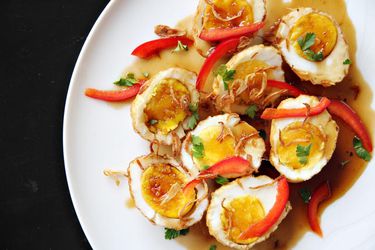