Last month I visited Seoul, South Korea, for the first time. Here's a look at something I ate from my one-week trip.

It wasn't until I had asked friends for food recommendations in Seoul that I first heard of temple cuisine, traditional vegetarian (or vegan, to be more specific) food served at Buddhist temples. Because I can't just eat fried things and noodles all the time, I was grateful to come across Sanchon ("Mountain Village"), one of the most famous restaurants in Seoul (and worldwide) that specializes in temple-inspired cuisine, while walking around Insadong with Rachel Yang and her mother on my last full day in South Korea. The restaurant was opened in 1981 by Kim Yon Shik, a former Buddhist monk, who aside from being a restaurateur has also written three cookbooks about vegetarian cuisine. (For more information, you can read an interview with Kim Yon Shik at Hi Seoul.)

The restaurant is located at the end of a winding path in an old-fashioned house, making for a calm, secluded atmosphere in what is generally a busy area. After taking off your shoes you enter the house's courtyard—aka the dining room—decorated with beautiful handmade lotus-shaped lanterns. You have the choice between sitting at a regular table with chairs or low tables with cushions on the floor, but when I was there everyone chose the latter. (I preferred it; it made me feel closer to my eating companions and my food.) Keeping with Buddhist tradition, the utensils and most of the serving dishes are made of wood from the zelkova tree.

For ₩22,000 ($17.84) per person, the prix fixe lunch provided us with more than 20 dishes. They were mostly small portions of seasoned vegetable dishes, or namul in Korean, but it was still a lot of food. And to be honest, I don't know exactly what I ate. There were many unidentifiable forest and mountain vegetables seasoned with sesame oil, one of my favorite seasonings. Aside from the variety of seasoned vegetables, there was also japchae, pan-fried pancakes, soybean stew, and tofu.

My favorite dish was the sweetened fried kelp for its initially crisp texture that melted into softness at first bite, and combination of sweet and salty. The hearty tofu stew was especially comforting to eat during that cold, drizzly morning. And then there was the fun of having a miniature buffet of well prepared vegetables at my fingertips. While I could never love the more bitter greens, I loved having such a wide variety of flavors and textures, and, for a rare moment, not feeling bloated and fat after my meal ended.

If you're curious enough though, here's the full menu as it was written by the restaurant with my comments in brackets:

The menu also notes that they use certain ingredients called "The Five Stimulants" ("osinchae" in Korean) that you wouldn't find in traditional temple food: onions, green onions (scallions), baby garlic, green peppers, and honggo (dropwort). You can specify that you want dishes without the stimulants. (I found other sources that didn't list green peppers as one of the five stimulants, but included leeks, chives, and while rocambole. I would assume that anything in the onion and garlic categories aren't allowed, but that the five stimulants specifically refer to Korean ingredients.) 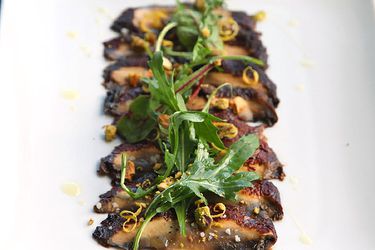 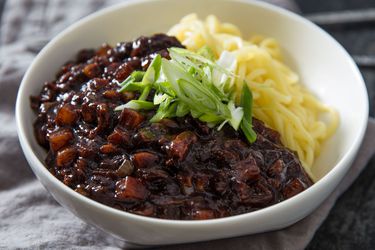