On a recent work trip to Nairobi, I had the opportunity to fly out to Mombasa one weekend. Mombasa is Kenya's second largest city and a major beach town. The Saturday I was there, rather than heading to the beach, I rented a mountain bike and rode through the countryside along the coast. I passed over lush hills, across fields of mangos and bananas, and through local villages where children ran out to greet me with choruses of "Jambo, muzungu*!"

In the early afternoon, I came to one particular village where I arranged to have lunch. Situated outside a small wood and clay hut, I watched as some of the women began working on a spread of chicken, vegetables, and other traditional Mombasan fare. While the meal was being prepared, a number of other villagers gathered under the small awning outside the hut. One of them, named Abdul, seemed something of a patriarch.

Abdul introduced me to mnazi, a palm wine made from the fermented sap of palm leaves. It's a milky, white substance that's drunk through a filtered reed to remove any particulate matter. Though bitter and sour, mnazi leaves an almost sickly sweet residue in your mouth. They appeared to go through multiple bottles of the stuff while I was there. With some probing, I learned that it's made on a daily basis—steps are carved into the trunks of palm trees to facilitate easier harvesting of the leaves.

I watched as Abdul brought around a live chicken. He jokingly taunted some of the onlooking children with it, then settled down to business. A few brave candidates stepped forward to hold its wings down; the rest of the children and I looked on as he slit its throat. The women cleaned and gutted the bird and sent it off to cook in a small pot. A bit of cooking oil, poured from a small baggy, and some store-bought curry powder joined it over the tiny charcoal stove.

The rest of the meal consisted of greens cooked with onions, tomatoes, and some of the oil called sukuma wiki (not unlike how you'd find collard greens prepared in the States); steamed potatoes and bananas; and the ubiquitous ugali. The Kenyan staple is little more than boiled cornmeal, stirred until it achieves a dense doughy consistency. Ugali accompanies most meals, a starchy side dish that serves a function similar to bread or rice.

The trio of women worked for about an hour and a half on our meal. To my American taste buds, the limited seasoning resulted in a dish that was more mild than expected, letting the ingredients speak for themselves. Watch it come together in the slideshow » 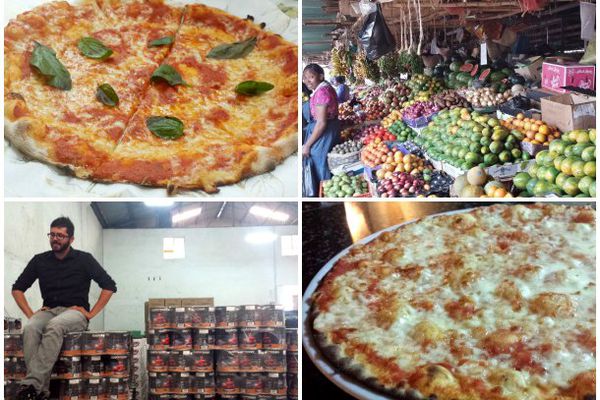