The Japanese aren't big snackers. Indeed, it's frowned upon to eat while walking. You won't see people standing on subway platforms digging into a bag of chips. The vertical pizza-slice fold is virtually unknown in Kyoto, because nobody eats pizza walking down the street. Every fast food restaurant has seating. The snacks you find in the warm cases at 7-11? Yep, they're there, but if you think it's OK to pick one up and eat it on the spot, think again. Take it home or take it to your hotel before you consume, thank you very much.

Even at street fairs—of which there are many in the days surrounding New Year's in the temple-rich city of Kyoto—you're expected to purchase your food and consume it while standing or sitting near the stand where you bought it.

It's just a different eating culture from the one we're used to in the states or most of Europe. Which is not to say that the street food isn't delicious. It is, and just like at a midwestern state fair, foods tend to rely heavily on easy-to-do-outdoors cooking techniques like deep-frying and grilling, though Japanese snack food is also often made using specialized cast-iron molds.

Sweet, tangy Kewpie mayonnaise is nearly ubiquitous, as are the many minor variations of Worcestershire-based Japanese-style barbecue sauce. Many of these snacks have been around for decades (my mother remembers eating some as a kid), while others are more modern creations. 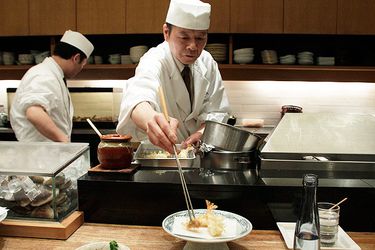 A Ten Course Tempura-Only Meal at Tsunahachi in Tokyo, Japan