You could say that the Israeli food culture is very young, as Israel only became a nation in 1948. But its roots go back thousands of years. If you want to dig real deep, you could flip through the Old Testament and start talking about the magical manna that sustained the Hebrews in the desert. But we won't go quite that deep.

What's become known as Israeli cuisine today is a delicious melting pot of North Africa (Morocco, Libya, Tunisia, and Algeria) and its Middle Eastern neighbors (Lebanon, Yemen, and Iraq), as well as the Mediterranean countries, and don't forget the Jews from all over Eastern Europe and Russia. Jewish immigration began at the end of the 19th century, and the early settlers brought with them food cultures from far and wide.

This wave of people, mainly from Arab countries but also European Holocaust survivors, flooded the new State of Israel. They tenaciously clung on to their culinary heritages as a way of preserving their identities, but eventually started swapping and sharing cooking styles.

So, what is Israeli food? The closest thing to a one-sentence answer: a cross-fertilization of all of the above, and it's still evolving. Arab and Jewish, Eastern Europe and North Africa, religious and secular.

Most of my trip was centered in and around Tel Aviv, with a day in Jerusalem, and a drive up north to the seaside town of Acre. Some reoccurring themes all over: olives, falafel, fresh vegetable salads, pita, filo dough pastries, and many (many!) bowls of hummus.

Check out all of my favorite bites in the slideshow >>

Note: Erin traveled through Israel on a 7-day eating tour thanks to Kinetis. 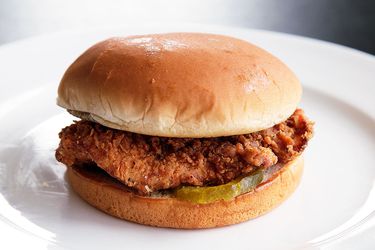 Fried Chicken for a Cause: The Best of #BetterThanChickFilA