Editor's Note: Aki Kamozawa and H. Alexander Talbot, the great minds behind the influential blog Ideas in Food, and the cookbooks Ideas in Food and Maximum Flavor, will be sharing their wisdom and clever cooking ideas here on Serious Eats, as they reinvent classic dishes with the aim of getting the most flavor out of them.

As children, we both spent several formative summers at sleep-away camp. In addition to mastering canoeing, lanyard-making, and volleyball, we also developed strong feelings about the campfire-roasted s'more. In construction, the s'more is simply a golden brown, gooey marshmallow snuggled up against a few squares of Hershey's chocolate and sandwiched between golden graham crackers. In reality, though, it is a taste and flavor sensation that evokes memories of childhood that are dear (or maybe painful) to us all.

In approaching this recipe, we took the classic campfire dessert and liberated it from its bonfire roots. A graham cracker cake may sound crazy, but it is insanely delicious, even better than the original cracker, we'd argue. Add a chocolate mousse made with dulce de leche and a creamy flame-toasted marshmallow topping (okay, we'll admit it, our version is really more of an Italian meringue) and you've got a cake that anyone would love. And yes, once they taste it, they will ask for s'more.

Read on for a breakdown of the S'mores Cake step-by-step method.

We start by pulsing graham crackers in a food processor until they turn into fine crumbs, then work in cake flour, baking powder, and salt.

Then we pour in milk, buttermilk, egg yolks, and vanilla paste.

Finally, we drizzle in cooled brown butter along with all its flavorful browned milk solids.

The batter bakes up into a beautiful golden-brown cake in a rimmed baking sheet.

Once it's cooled, the cake can be turned out and the parchment-paper lining can be pulled right off. Now the cake portion of the recipe is ready to be cut and assembled.

To make the chocolate mousse, we start by making caramelized condensed milk (AKA dulce de leche) by cooking cans of condensed milk. This can be done in boiling water, but that can take several hours. To speed the process up significantly, we do it in a pressure cooker, which takes about 90 minutes.

Technically we only needed 1 can of the condensed milk for this recipe, but we love the dulce de leche so much we always make extra at the same time, and save it for other uses (the sealed cans will keep refrigerated or at room temp as long as their expiration date).

An ice bath is one of the best ways to quickly cool the cans down before opening.

Once fully cooled, the cans can be opened to reveal the dulce de leche inside.

Then we make the chocolate mousse in a blender by blending together eggs with a hot mixture of cream and the dulce de leche, then working in chocolate chips.

As we mentioned above, this marshmallow-like topping is really an Italian meringue, in which we beat hot sugar syrup into egg whites (the sugar syrup cooks the egg whites as it's drizzled in, making the meringue safe to eat without further cooking). We also flavor the topping with bourbon, because our campfires these days tend to include a little flask of whiskey to pass around with the s'mores.

How to Assemble the Cake

To assemble the cake, we start by tracing the base of a 9-inch spring-form pan to make 2 full circles and 2 semicircles of cake, then cut those shapes out, saving the trimmings.

The two semicircles form the bottom of the cake, which we build in the 9-inch spring-form pan. We use the cake trimmings to fill any gap between the semicircles.

Then we spread 1/3 of the chocolate mousse on the bottom layer.

We continue layering the cake, adding the next cake circle, followed by another third of the mousse, then the final cake layer, and finally a top layer of mousse with what remains of it.

We chill the assembled cake layers to set the chocolate mousse, then spread the marshmallow icing all over it.

To get that campfire-roasted flavor, we toast the topping all over with a butane torch.

Every bite screams for s'more. 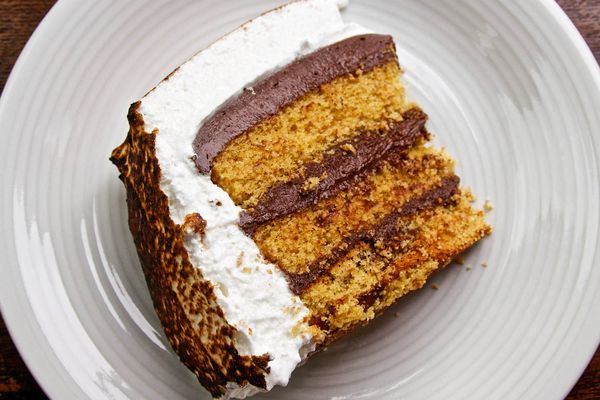 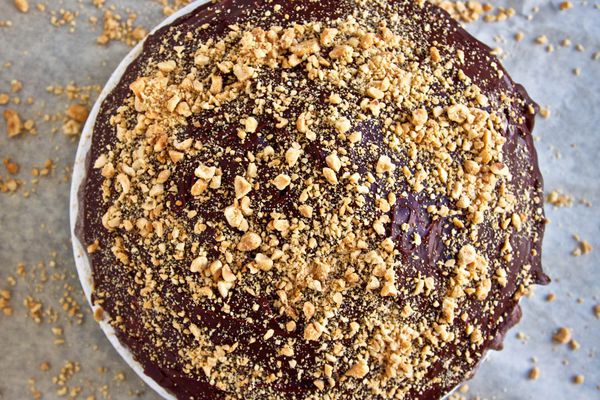 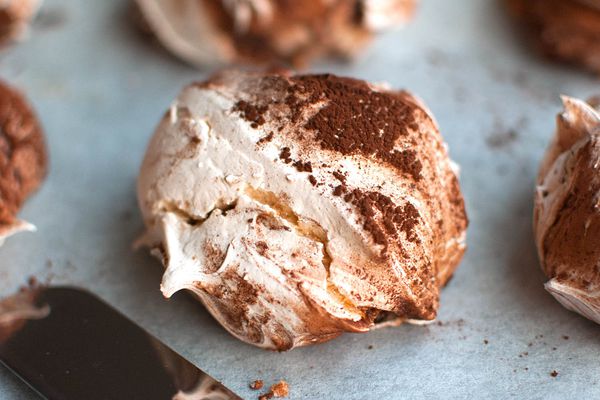 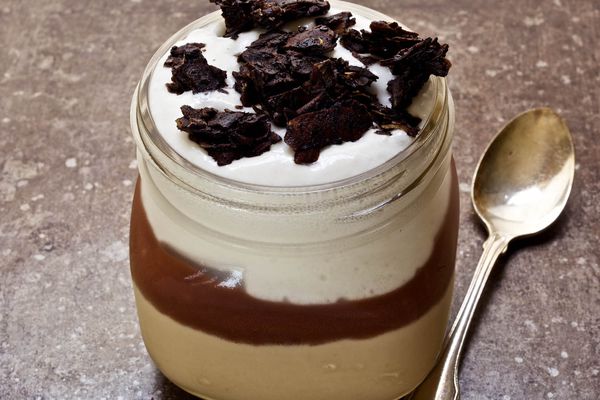 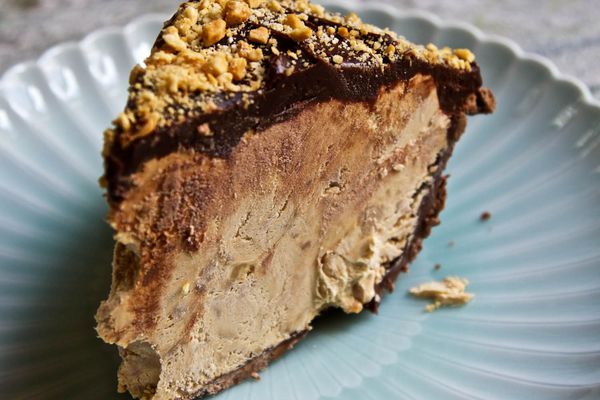